Lyndon B. Johnson is sworn in as President by federal Judge Sarah T. Hughes on Air Force One on Nov. 22, 1963, in Dallas, following the assassination of President John F. Kennedy. He's flanked by Jacqueline Kennedy (right) and wife Lady Bird Johnson (left).
Cecil Stoughton-WH Photographs/AFP—Getty Images
By Olivia B. Waxman

There were 98 minutes during which the very fate of the United States seemed, to some, to hang in the balance. On Nov. 22, 1963, President John F. Kennedy was assassinated in Dallas by Lee Harvey Oswald. But, as the nation grappled with the violent and world-changing event, the U.S. proved that the shock would not disrupt the normal course of government: just a little over an hour and a half after JFK was declared dead, his Vice President Lyndon B. Johnson was sworn in as the new President, aboard Air Force One in Love Field.

“Technically, Johnson had become President the moment that Kennedy died,” TIME reported the next week. “But with that ceremony, President Johnson seemed to realize for the first time that the transfer of responsibility was real.”

To ensure the world would see that America forged ahead in the midst of tragedy, the moment was captured on film, as seen above.

Johnson is clearly the central figure in the image, for good reason. He’s flanked by two other recognizable figures, the bloodstained First Lady Jacqueline Kennedy, to his left, and his wife Lady Bird Johnson, the new First Lady, to his right. But there’s another woman in the picture with an important role in this moment in history: Texas federal judge Sarah T. Hughes, in the lower-left corner with her back to the camera.

She’s the one swearing in Johnson — an act that made her the first woman ever to swear in a President, just one of the milestones in her trailblazing career.

Born in Baltimore as Sarah Tilghman, she had graduated from Goucher College and in the 1920s worked as one of the few female cops in Washington, D.C., to put herself through George Washington University Law School at night. She met her husband, a Texan, at the school, and they moved to the Dallas area after graduation. After having trouble finding a law firm that would hire a woman, one firm let her use office space for free in exchange for her services as a receptionist, and a partner at the firm referred some cases to her, according to Darwin Payne’s biography of Hughes, Indomitable Sarah. In 1930, she became the youngest woman elected to the state’s legislature when she was elected to the Texas House of Representatives at the age of 34. During her three terms, she fought for women to serve on juries there, a civic role from which they were at the time barred. In 1935, she became the first female state district judge in 1935 when Texas Governor James Allred appointed her to the 14th District Court in Dallas.

In January of 1961, she told Vice President Johnson, a fellow Texan, that she wanted to be a federal judge. Johnson struggled to convince Attorney General Robert F. Kennedy to nominate her for a Federal District Court judgeship, in part because of personal tensions between the two, and in part because RFK reportedly thought she was too old at 65. (She was an outlier for another reason, too: In early 1965, only three out of 412 federal judgeships were held by women, including Hughes; overall, 300 of the nation’s total 8,748 judges at the time were women.)

Johnson nominated another man for the post, but Hughes had one more card to play. She had the support of Texas Congressman Sam Rayburn, who was also the Speaker of the House.

According to LBJ biographer Robert Caro’s The Passage of Power, he held up a bill that RFK thought would sail through the House Judiciary Committee. “That bill of yours will pass when Sarah Hughes gets appointed,” Caro quotes the Speaker as saying. When RFK, who was then around 36, brought up Hughes’s age, the Speaker reportedly responded, “Sonny, everybody seems old to you.” Caro writes, “Ms. Hughes’ appointment was announced the next day.” Johnson was overseas when that change of heart happened and was “outraged” that he was left out of the exchange, and embarrassed about having to rescind his word to the male lawyer he promised the gig to, reportedly telling President Kennedy, “Sarah Hughes now thinks I’m nothing. The lawyer I offered the job to — he thinks I’m the biggest liar and fool in the history of the State of Texas.”

After JFK was assassinated in Dallas, Johnson specifically wanted to be sworn in by Hughes and ordered his protégé, a U.S. Attorney known as Barefoot Sanders, to bring Hughes to Air Force One so she could administer the oath of office.

“There are scholars who say Johnson summoned her to swear him in on a plane full of Kennedys as an act of revenge,” because RFK had tried to block her federal judgeship appointment, says Randall B. Woods, author of LBJ: Architect of American Ambition, but he thinks it’s more likely she was just the person who made sense. “Who else would he have called? She’s a federal district court judge for the Northern District of Texas, which includes Dallas.”

Hughes herself claimed it was more personal than that in an interview conducted in 1968 for the Lyndon Baines Johnson Library’s collection of oral histories. As she put it, other local federal judges were essentially off-limits — one, Joe Estes, had been an “Eisenhower Democrat” and one, T. Whitfield Davidson, “had enjoined the Democratic executive committee from certifying Johnson’s name when he was nominated for the Senate.”

Johnson merely told Jacqueline Kennedy “that I was a district judge who had been appointed by her husband,” she recalled. “None of us said anything.”

Hughes continued to make history after that moment on the plane. In 1970, she was part of the three-judge district court panel that ruled that Texas’ abortion ban violated the rights of a woman known as “Jane Roe”; that case went on to the U.S. Supreme Court, which affirmed in Roe v. Wade (1973) that it was unconstitutional to prohibit abortions.

Hughes died on Apr. 23, 1985, after a stroke, in Dallas, at the age of 88. And she would probably rather be remembered for her impact on judicial — and presidential — history, rather than specifically as someone who broke new ground for women.

“The sooner we get to consider women as individuals rather than as women, the better it will be,” she told TIME in 1965. “All women are not alike, just as all men are not alike.” 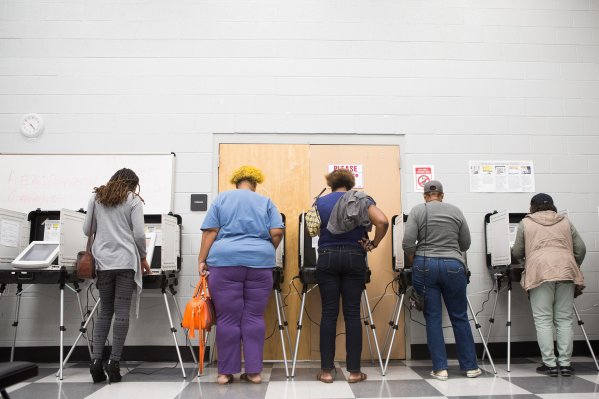 I’ve Worked in Republican Politics. The Party’s Voter Suppression in the Midterms Has Been a Disgrace
Next Up: Editor's Pick