Historians who hail the heroes of World War II typically focus on soldiers storming the beaches of Normandy or Allied troops liberating concentration camps. Rarely remembered are the networks of quiet, effective resisters who also risked their lives to thwart Nazi atrocities while the war raged on. These resisters are exemplified by women like Miep Gies, who in 1942 decided without hesitation to hide Anne Frank and her family along with others in Amsterdam. She later preserved the teen’s diary, which allowed future generations to learn about life during the Holocaust and hear Anne’s unique voice.

That same year, 28-year-old Haviva Reik enlisted with the pre–state of Israel’s elite Palmach fighting force and later joined a unit of paratroopers, hoping to be sent to her native Slovakia to rescue Jews trapped under Nazi occupation. The British refused to transport a woman for a military mission, so Reik secured a ride from American pilots and met her colleagues behind enemy lines, in the middle of the Slovakian national uprising. After arriving, she fed starving Jewish residents, helped some escape and eventually rallied Jewish partisan fighters. In 1944, she was captured and killed by Nazi collaborators.

Hannie Schaft, another young dissenter, went from law student to legendary fighter when she and two friends seduced and killed Nazis as part of their work with the Dutch resistance. Her tactics were so infamous that Germans referred to her simply as “the girl with the red hair.” And Hannah Szenes, who grew up experiencing anti-Semitism in Hungary, joined the British army in Palestine, parachuted into Yugoslavia and was captured trying to save Jews at the height of their deportation from her home country. Despite being tortured and put on trial, Szenes refused to betray her mission, and was also executed in 1944.

In her diary, Anne Frank wondered, “How many people look upon women too as soldiers?” They may not have fought on the front lines, but underground fighters and everyday objectors saved Jews and helped preserve the memory of the horrors that took place and the millions of lives that were lost. —Abigail Abrams 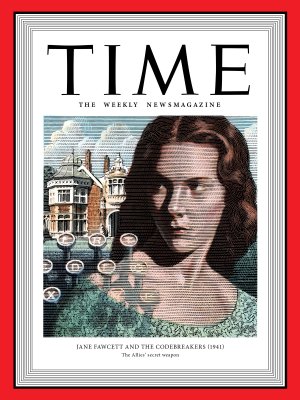 1941: Jane Fawcett and the Codebreakers
Next Up: Editor's Pick