‘Those Are Things You Don’t Forget.’ How a Young Audrey Hepburn Helped the Dutch Resistance During World War II

Biographers and many Dutch people who lived through World War II have doubted the participation of a young Audrey Hepburn in work for the Resistance against the Nazis, saying, “She was just a girl. What could she possibly have done?” But as she was under the influence of such an enterprising and patriotic character as local Resistance leader Dr. Hendrik Visser ’t Hooft, the many stories she told about her activities in the war become highly plausible.

First and foremost, with the encouragement of Dr. Visser ’t Hooft, for whom she volunteered, she could dance. Audrey’s celebrity as a ballerina for nearly four years at the Arnhem city theater made her talents valuable to Dr. Visser ’t Hooft and the Resistance for illegal musical performances at various by-invitation-only locations. These events, called the zwarte avonden, or “black evenings,” had first been introduced by musicians as a way to earn money after they had been forced out of the Dutch mainstream by the Nazi union of artists, the Kultuurkamer. Soon the zwarte avonden were helping to raise funds in support of those sheltering the tens of thousands of Jews and other people in hiding across the Netherlands — including those in her hometown of Velp. They were known as black evenings because windows were blacked out or darkened so the Germans didn’t know of the activities going on inside.

The first documented involvement of Audrey’s family, the van Heemstras, with the zwarte avonden took place on April 23, 1944, when at least one van Heemstra, and likely both Audrey and her mother Ella, attended an illegal performance, their family name listed among those present. From that point on, Audrey wanted to participate.

By this time she, like most Dutch young people, was already suffering symptoms of malnutrition, yet still she danced. “I was quite able to perform and it was some way in which I could make some kind of contribution,” she said.

In another interview Audrey said: “I did indeed give various underground concerts to raise money for the Dutch Resistance movement. I danced at recitals, designing the dances myself. I had a friend who played the piano and my mother made the costumes. They were very amateurish attempts, but nevertheless at the time, when there was very little entertainment, it amused people and gave them an opportunity to get together and spend a pleasant afternoon listening to music and seeing my humble attempts. The recitals were given in houses with windows and doors closed, and no one knew they were going on. Afterwards, money was collected and given to the Dutch Underground.”

Many of the events in which Audrey performed were staged in the home of homeopathic physician Dr. Jacobus T. Wouters, who lived in a large villa at the corner of Ringallee and Bosweg in Velp, not far from the home of the van Heemstras. Wouters wasn’t a member of Velp’s inner circle of physicians, but his willingness to host a series of black evenings proved his patriotism. Ella also hosted at least one illegal black evening at the van Heemstra home, Villa Beukenhof, during which her daughter danced. The Resistance events were high risk, with danger always present.

“Guards were posted outside to let us know when Germans approached,” said Audrey, who reported that “the best audiences I ever had made not a single sound at the end of my performance.” They had reason to be cautious because lives depended upon it. Evil lurked in Velp. It had arrived with top Nazis, like the ruler of the Netherlands Arthur Seyss-Inquart and his SS henchman Hanns Albin Rauter, and the basing of national Nazi secret police operations inside the Park Hotel. Audrey passed close by this evil in downtown Velp one day, and what she heard stayed with her for the remainder of her life. She was walking with her mother along Hoofdstraat past the Hotel Naeff. At the intersection with Vijverlaan, just four blocks from the Beukenhof, they waited for traffic to clear by the venerable Rotterdamsche Bank, a brick and stone building with a turret on the corner. Audrey looked up at the bank, the city’s most solid structure, which the Dutch security police had commandeered to hold political prisoners. She said she heard “the most awful sounds coming out of this building. It was then explained to me [by my mother] that it was a prison and perhaps people were being tortured. Those are things you don’t forget.”

By now, every life in Velp had been affected, if not outright ruined or taken away, by the German or Dutch Nazis. Village doctors enjoyed some degree of immunity, but not so the local religious leaders. Pastor J.A. Schaars of the Catholic Church, one of the most charismatic men in Velp, had been arrested in 1942 and was now in a concentration camp. Reverand Adriaan Oskamp of the Reformed Church was also arrested and sent to a camp. Father J.H. Campman, who had worked tirelessly for the Resistance until he was captured, died in a concentration camp. These were the village leaders, and all had been forced out by the Germans — which only spurred on the activities of Dr. Visser ’t Hooft and his companions in the local Resistance cell.

One of their most important efforts arose out of the air war and the Allied bombing campaign against Germany that was bringing down so many heavy bombers and their crews over Holland. The Resistance helped many American and British fliers to evade capture as they went “on the lam,” armed only with a service .45 and an escape kit that contained a silk map of Europe, a translation card of key Dutch and German phrases, and some Dutch coins.

Upon landing, if he didn’t break a leg or a back, each individual airman was responsible for avoiding capture. The Dutch Resistance did what it could to keep the airmen, most of them aged 19 or 20, hidden from the Germans. If all went well, they would be delivered into the Dutch Resistance network and spirited south over the “Freedom Trail” through the Pyrenees Mountains and into northern Spain.

In a 1951 interview with Sidney Fields of the New York Daily Mirror, Audrey tossed off the fact that her role with the Resistance had included “running around with food for the pilots,” referencing the Allied airmen shot down over the Netherlands during the 1944 bombing campaign and hidden by the Resistance in and around the village before being moved south. Dr. Visser ’t Hooft sent her at one point during this period to take a message, and perhaps food, to one of the downed fliers. Her qualifications were simple: She spoke English fluently whereas other young people within easy reach in the village did not. Many versions of the story exist, a story that originated with Audrey herself when she told it to American writer Anita Loos. The most reasonable interpretation is that as a 15-year-old — still young enough to be deemed “safe” by the German Green Police — she sought out this flier, likely a fighter pilot who had been shot down and now hid in the woodlands just north of Velp. He must have been quite close to the village because the Germans decreed that no civilians could trespass in the forests of the Veluwe, which lay just beyond Rozendaal. The reason: Deelen Air Base sprawled across the edge of the Veluwe north of Arnhem and Velp. For any Dutch civilian, venturing near this complex meant death, so Audrey must have been closer to Velp when she made contact with the fugitive.

By this point in the war, hundreds of Allied airmen had been shot down over the Netherlands, mostly from B-17 or B-24 heavy bombers on their way to or from Germany. Audrey, through her work for Dr. Visser ’t Hooft, would have been at least vaguely aware of the activities of the local Resistance to funnel these fliers south through local towns and cities to Belgium, where they would be handed off to the underground network. Her task here and now, completed in mere minutes, helped to keep that machinery running.

After delivering the message to the flier successfully — Go to this place, say these words, and the people will help you — she saw Dutch Nazi police in green uniforms approaching. Another 15-year-old might have crumbled at this moment. Not the Dutch girl; not the dancer with the iron will and self-discipline to fight to the top of Arnhem ballet. Audrey kept her wits and began picking wildflowers in the rough countryside. When the Germans in the green uniforms reached her, she remained silent and sweetly presented her flowers to them. After the soldiers checked her Ausweis, her official papers, she was allowed to pass. Something along these lines must have taken place because Audrey described the events — British man in forest, message delivered, flowers given to soldier.

“Every loyal Dutch schoolgirl and boy did their little bit to help,” said Audrey. “Many were much more courageous than I was.”

But it seemed to Ella that the situation was becoming more dangerous by the day. As August 1944 wore on, she put a plan in action to take Audrey from Velp and move farther west, away from the German border. The Hague seemed like a good place to relocate. There were many van Heemstras there and perhaps they were better connected to the black market. Maybe they could help Audrey put on some weight and regain her health; maybe there was even a way for Audrey to return to dance in another part of Holland. Who could say in wartime what was the best decision? But Ella’s gut continued to tell her: It’s time to go. 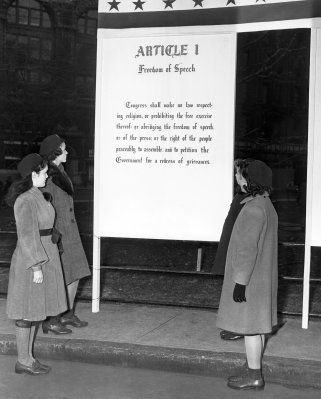 The Freedom of the Press Is Enshrined in the First Amendment—But What That Means Has Changed
Next Up: Editor's Pick