The Biggest Moments of the Super Bowl 2020 Halftime Show

As expected, Jennifer Lopez and Shakira brought everything to their historic Super Bowl 2020 Halftime Show on Sunday evening at the Hard Rock Stadium in Miami Gardens. It was a rollicking, festive show that highlighted both performers’ extensive back catalogues of hits, super-charged by guest appearances from fellow Latin artists Bad Bunny and J Balvin. But they also made sure to nod at the importance and political potential of the moment, showcasing support for Puerto Rico and recognizing the immigration crisis with their set pieces. Here were the biggest moments of the Super Bowl LIV halftime show, which was ultimately a high-energy, sparkling celebration of dance and Latin pop. (Even Lady Gaga agrees.)

Shakira puts on a powerhouse show

Shakira kicked things off, dressed in glittering red Peter Dundas with a veritable army of female dancers at her command. She ran through her biggest songs, including “She Wolf,” “Whenever, Wherever” and “Hips Don’t Lie.” She whipped out her notorious belly-dancing skills, played a searing guitar (Shakira was a rock star before she went pop) and crowd-surfed her way through a mosh pit. There was a horn section and a salsa dance break. And when she closed out with “Hips Don’t Lie” and the famous “No fightin'” intro to that song, the crowd went wild. (Also notable: her playfulness with the camera, including a meme-worthy moment.)

In a surprise appearance, Shakira brought out Puerto Rican rapper and singer Bad Bunny for an energetic cover of Cardi B’s 2018 hit “I Like It” halfway through her set. (Bad Bunny is one of the original featured artists on that song, delivering a verse in Spanish.) They also sang Shakira’s Spanish-language hit “Chantaje” together, with Bunny filling in for Colombian singer Maluma.

Jennifer Lopez continues the party — and takes to the pole

The Halftime Show transitioned directly over to Lopez for a rousing set that she kicked off with her classic song “Jenny from the Block,” surrounded by a cadre of dancers, decked out in Versace black leather and dancing exuberantly. But the highlight came after Lopez made a costume change to a sparkling body suit and sang “Waiting for Tonight” while pole dancing, putting to excellent use the skills she honed while filming for Hustlers. Lopez cycled through songs including “Love Don’t Cost a Thing” and “On the Floor” before ceding the stage to her daughter and a chorus of girls to start off “Let’s Get Loud.”

Jennifer Lopez and Colombian singer J Balvin perform during the halftime show of Super Bowl LIV between the Kansas City Chiefs and the San Francisco 49ers at Hard Rock Stadium in Miami Gardens, Florida, on February 2, 2020.
Photo by ANGELA WEISS/AFP via Getty Images)

Colombian reggaeton star J Balvin showed up for a cameo in Lopez’s set with his hit song “Mi Gente.” Mi Gente had featured Beyoncé in a 2017 remix; this time, Lopez accompanied the Latin music superstar. The message of “Mi Gente” is one of Latin unity, making it an especially apt choice for the Super Bowl set.

Lopez’s 11-year-old daughter Emme got her time to shine as well — and to prove she follows in her mom’s footsteps — coming out to sing with a chorus of girls for a sweet rendition of the Lopez classic “Let’s Get Loud;” the camera also panned over to Shakira during the song, who was playing the drums.

Puerto Rico gets a spotlight from Lopez

US singer Jennifer Lopez performs during the halftime show of Super Bowl LIV between the Kansas City Chiefs and the San Francisco 49ers at Hard Rock Stadium in Miami Gardens, Florida, on February 2, 2020.
AFP via Getty Images

In a marked gesture of solidarity toward the Latin community and those impacted by anti-immigration policies, the set design featured glowing cages housing child performers. To drive the point home, they sang a snippet of “Born in the U.S.A.”

“I think it started, from a musical standpoint, having ‘Born in the USA’ in there for a little moment, and it just was a natural evolution. We had a great partnership with Versace and Rob [Zangardi], her stylist, saying, ‘Let’s just do this in a way that everyone feels that American pride.’ One of the choreographers who worked with Lopz, Tabitha Dumo, told Buzzfeed.

A “Waka Waka” finale with Cheer

Shakira threw it back to her 2010 World Cup song “Waka Waka” for their joint finale, which also featured some exuberant cheerleading-style basket tosses. (Fans of Netflix’s latest hit documentary series Cheer were reminded of the athletic feats seen on that show, as the Halftime Show dancers were thrown up into the air for the dramatic finish.) Lopez and Shakira closed out their set with impressive synchronized shimmies, the ultimate power move.

Together, the duo made history

Lopez and Shakira were the first Latin artists to co-headline America’s most-watched annual event, and the first pair of female artists to share top billing. (Gloria Estefan was part of the 1992 and 1999 halftime shows, and sent her support for Lopez and Shakira, both of whom she has written songs for.)

“I think it’s a very important moment for our community, for the Latino community in this country,” Lopez said of the moment ahead of Sunday night at a press conference.

“The Super Bowl is a very American event, as American as it can get. It will also be a reminder of the heritage of this country, which is one of diversity, and that’s what we will be celebrating on Sunday,” added Shakira, who is celebrating her 43rd birthday Sunday.

Just hours before the performance, Lopez emphasized the significance of their performance in an Instagram post that featured them hugging. “So excited to share the stage with you tonight @Shakira! ✨💕✨ Let’s show the world what two little Latin girls can do. #LetsGetLoud #GirlPower #SuperBowlLIV #SBLIV”

They followed Maroon 5 in 2019, a show dogged by controversy surrounding the NFL due to the status of Colin Kaepernick. This year, however, Lopez and Shakira were brought on following the announcement of a partnership between the NFL and Jay-Z’s Roc Nation, and were welcomed for the Miami event.

Super Bowl LIV saw the San Francisco 49ers facing off against the Kansas City Chiefs in the NFL’s annual showdown with the Chiefs winning 31-20.

On Monday night, Jennifer Lopez reflected on the halftime show in an Instagram post with a video of the preparation.

“These moments were captured just minutes before we hit the stage last night. All I want my girls, the little girls on stage with me, and all over the world to know is how to use their voices and be proud of everything they are. We are proud to recognize that all of us together are what makes this beautiful country truly great.” 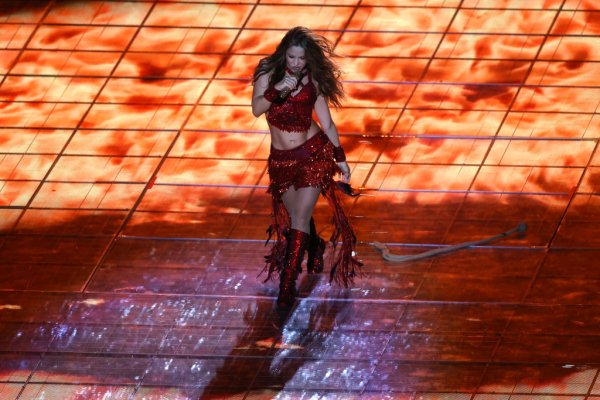 The Internet Rushes to Make a Meme Out of This Magical Shakira Super Bowl 2020 Halftime Show Moment
Next Up: Editor's Pick