Massachusetts Sen. Elizabeth Warren’s new immigration plan would decriminalize migration, making it a civil rather than criminal violation, following the lead of a plan by former Housing and Urban Development Secretary Julián Castro.

Unveiled in a Medium post Thursday, the 2020 Democratic presidential candidate outlined a sweeping plan to change the country’s immigration system, designating a Justice Department task force to investigate accusations of migrant mistreatment and dramatically reducing the number of migrants held in detention facilities by instead relying on existing surveillance and monitoring technology.

“We already have the tools to effectively track and monitor individuals without shoving them into cages and camps along the border. As President, I’ll issue guidance ensuring that detention is only used where it is actually necessary because an individual poses a flight or safety risk,” the post says.

Castro, the former mayor of San Antonio, first proposed decriminalization of border crossings in April, making being in the United States without proper paperwork a civil offense, which some have compared to the “federal equivalent of a traffic ticket.” Undocumented immigrants could still be deported, but harsher treatment such as criminal detention and family separation would be effectively undone by the move.

Warren endorsed that proposal in late June, ahead of the first Democratic debates, where Castro pressed other candidates to support it as well.

In her own plan, Warren would also eliminate expedited removal — a system in which low-level immigration officials can automatically deport migrants who arrive at the border without documentation, or who are encountered within 100 miles of the U.S. border during their first two weeks in the country. Traditionally, expedited removal has been used only when migrants have histories of previous criminal or immigration violations, but migrants have no right to appeal an immigration officer’s decision, and often never get to see a judge or attorney.

Additionally, Warren would raise the number of refugees permitted to enter the U.S. She says she’d welcome 125,000 refugees in her first year in office and increase that total to at least 175,000 by the end of her first term. By contrast, Trump allowed less than 23,000 refugees to resettle in the United States in fiscal year 2018 — roughly half the cap of 45,000.

Warren says she would make legal migration a priority by reinstating and extending the cutoff date for the Deferred Action for Childhood Arrivals program for undocumented immigrants brought to the U.S. as children, repeal laws that require undocumented immigrants to wait up to 10 years before they can apply for citizenship and create a federal office that supports new immigrants.

“We should provide English, civics, and employment-focused classes and training for immigrants who want to enroll, and work with faith groups and other community organizations to provide support services for refugees and asylees, providing the tools to make it easier for newcomers to integrate into their communities,” her post says.

Lastly, Warren would attempt to address the conditions that are making some migrants flee their home countries in the first place. She says she would annually commit at least $1.5 billion in aid to fund programs targeting crime, poverty, sexual violence, and trafficking in Central America, and also try to rally other developed countries to match those funds.

Though it might be challenging to accomplish some of these measures if the Senate remains in Republican hands, Warren says she is willing to change the system with or without approval from Congress. 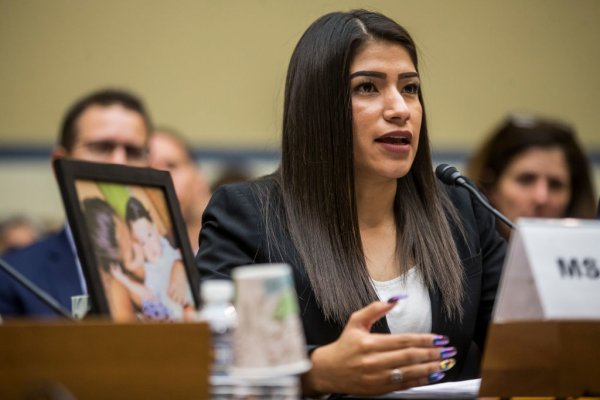 Her 19-Month-Old Daughter Died After Being Held at an ICE Facility. Here's What Yazmin Juárez Told Congress
Next Up: Editor's Pick