It’s almost time for Super Bowl Sunday, February 3, when Maroon 5 will headline the 2019 Super Bowl halftime show alongside Travis Scott and Big Boi in Atlanta, Georgia when the New England Patriots face the Los Angeles Rams. The flashy gig has long been considered the performance of a lifetime for a musical artist, but this year, the politics surrounding Super Bowl LIII halftime also have the potential spotlight.

Here’s what you should know about the controversy.

Colin Kaepernick, the NFL and the National Anthem

In 2016, then-quarterback for the San Francisco 49ers Colin Kaepernick chose not to stand during the national anthem during a game as a form of peaceful protest against systemic racism and police brutality towards people of color in the United States. “I am not going to stand up to show pride in a flag for a country that oppresses black people and people of color,” Kaepernick told NFL Media of his decision to remain seated during the anthem. “To me, this is bigger than football and it would be selfish on my part to look the other way. There are bodies in the street and people getting paid leave and getting away with murder.”

While Kaepernick gained support and solidarity from fellow athletes, celebrities, and fans. But though he chose to kneel during the National Anthem to emphasize that his respect for the military and veterans, he received plenty of backlash from detractors who criticized his protest as disrespectful to the flag and country, including President Donald Trump, who has harshly criticized both Kaepernick and the NFL.

The protest intensified after the NFL announced in 2018 that they would be instituting a new policy that requires all players to stand during the national anthem or opt to stay in the locker room during the anthem, which was later put on hold after the NFL Players Union filed a grievance against it. After leaving the 49ers in 2017 for free agency, Kaepernick has not been signed to another NFL team, which many believe is due to his activism. This includes founding the “Know Your Rights Camp” and making a collective million dollar donation to organizations aiding oppressed communities, work that has landed him among other athlete activists like Muhammad Ali and Mahmoud Abdul-Rauf. He’s since filed a grievance against the NFL, alleging that teams have colluded in not signing him. Kaepernick’s civil rights activism became the center of another controversy in September of 2018 when he became the newest face of Nike’s “Just Do It” campaign, despite the fact that the sportswear giant is a major sponsor of the NFL.

The city that gave birth to rap royalty like Ludacris, T.I., Outkast and the Dungeon Family, is widely considered to be the capital of current-day hip hop, thanks to artists like the Migos and Future — making it the perfect location for staging a spectacularly over-the-top halftime show at a time when rap has overtaken rock as the most popular genre in the country. So when it was announced that Atlanta, Georgia would host Super Bowl LIII, music fans hoped that the halftime show would do the city justice by tapping into its rich history as a cultural hub for music and entertainment, especially in respects to its contributions to hip hop. The NFL, however, opted to book Maroon 5, a pop group from Los Angeles.

As might be expected, booking a primarily white music group in one of the most prominent black majority cities in the country, historically known for its contributions to black art and culture, amid the existing tension of the kneeling protests and the NFL’s new policy of standing during the anthem led to backlash online. This was only compounded by reports that many artists from Jay-Z to Rihanna wouldn’t participate for various reasons including the decision to say no out of solidarity with Colin Kaepernick’s activism.

While rumors floated as early as November that pop rock radio darlings Maroon 5 would be this year’s headliners, the group wasn’t officially announced as the show’s main performers until January 13 — less than a month before the Super Bowl and the latest in recent history that a musical act has been announced for the Super Bowl halftime show. When reports began surfacing that Maroon 5 would be performing at the halftime show, a change.org petition began circulating, asking for the group to drop out of the show in solidarity with Colin Kaepernick, citing that “until the league changes their policy and support players’ constitutional right to protest, no artists should agree to work with the NFL.” It’s a sentiment that was summed up presciently in a bar from Jay Z on The Carters’ 2018 song, “Apesh-t,” where he raps “I said no to the Super Bowl, you need me, I don’t need you/Every night we in the endzone, tell the NFL we in stadiums too,” adding fuel to reports that Jay turned down an offer to perform at the 2018 Super Bowl, as a show of solidarity with Kaepernick. In the music video for the song, images of black men kneeling are shown while he raps about the Super Bowl.

This statement was also echoed by comedian Amy Schumer, who suggested that Maroon 5 decline the 2019 halftime show in support of Kaepernick’s protest; Schumer herself also refused to do a Super Bowl advertisement in solidarity with Kaepernick.

While Maroon 5 hasn’t addressed the the controversy surrounding the halftime showas a group, the band’s keyboardist and their sole black member, PJ Morton shared in a recent interview with the Associated Press that he thinks that the band “can perform for the NFL and the players can play for the NFL and we can support Kaep at the same time.”

The Tuesday before Super Bowl Sunday, the NFL cancelled its traditional halftime show press conference for the artist, citing that: Maroon 5 has been working hard on a Pepsi Super Bowl LIII Halftime Show that will meet and exceed the standards of this event,” the NFL said in a statement. “As it is about music, the artists will let their show do the talking as they prepare to take the stage this Sunday.”

On Thursday, frontman Adam Levine addressed the controversy during an interview with Entertainment Tonight: “I’m not in the right profession if I can’t handle a little bit of controversy. It’s what it is. We expected it. We’d like to move on from it and speak through the music.” Levine also said that this year’s show will have “the biggest hip-hop presence that’s ever been on the show” due to the participation of Travis Scott.

The band, the NFL and Interscope Records will be making a joint $500,000 donation to Big Brothers Big Sisters of America.

While many speculated that Cardi B would join Maroon 5 for the halftime since the artists collaborated on Maroon 5’s 2017 song, “Girls Like You,” a rep for the Bronx rapper strongly denied the claims, telling Page Six that she was “not particularly interested in participating because of how she feels about Colin Kaepernick and the whole movement;” instead, Cardi will be performing alongside her “Finesse” collaborator, two-time halftime show veteran and vocal advocate for hip hop at Super Bowl LIII, Bruno Mars, at the Super Bowl Music Fest.

But then on Super Bowl 53 weekend, Cardi B told the Associated Press that she turned down the opportunity to “stand behind” Kaepernick.

Instead, rapper Travis Scott and Outkast’s Big Boi will be performing at Super Bowl LIII with Maroon 5, decisions that have been slammed by both their peers and fans. Scott, especially, has received public critique for his decision to be a part of the 2019 show, being called out directly via Twitter by rapper Meek Mill and public figures like Rev. Al Sharpton and Michael B. Jordan expressing their disapproval of his role in the halftime show.

In a statement to Billboard, Scott said he refused to participate in the halftime show unless the NFL would make a joint donation with him to an organization fighting for social justice; Scott made a $500,000 donation alongside the NFL to Dream Corps and is planning to work with the NFL on additional projects.

“I back anyone who takes a stand for what they believe in,” Scott said. “I know being an artist that it’s in my power to inspire. So before confirming the Super Bowl Halftime performance, I made sure to partner with the NFL on this important donation. I am proud to support Dream Corps and the work they do that will hopefully inspire and promote change.”

However, Scott’s involvement is still steeped in controversy; after Variety reported that Scott and Kaepernick allegedly spoke about Scott’s decision to perform in the halftime show, “with mutual respect and understanding,” the reports were disputed by both Kaepernick’s partner, Hot 97 radio personality Nessa Diab and Hot 97 host Ebro Darden, both of whom tweeted that the reports were untrue. Kaepernick himself re-tweeted Darden’s tweet, which read: “Kap did not approve this bullsh-t! Get the f-ck out of here…”

Following the announcement that Maroon 5, Travis Scott and Big Boi would be performing at the Super Bowl, the NFL confirmed that Atlanta born-and-bred singer Gladys Knight would be singing the National Anthem at the 2019 Super Bowl. Knight, who’s known as the “Empress of Soul,” shared her excitement in an announcement video at “coming home” to her native city of Atlanta for the performance.

The legendary singer later weighed in on the Colin Kaepernick controversy and her decision to participate in the Super Bowl. In a statement to E! News, Knight stressed that the national anthem should be separate from the fight for social justice, while pointing towards her own history of civil rights activism.

“I understand that Mr. Kaepernick is protesting two things and they are police violence and injustice. It is unfortunate that our National Anthem has been dragged into this debate when the distinctive senses of the National Anthem and fighting for justice should each stand alone,” Knight said. “I am here today and on Sunday, Feb. 3 to give the Anthem back its voice, to stand for that historic choice of words, the way it unites us when we hear it and to free it from the same prejudices and struggles I have fought long and hard for all my life, from walking back hallways, from marching with our social leaders, from using my voice for good—I have been in the forefront of this battle longer than most of those voicing their opinions to win the right to sing our country’s Anthem on a stage as large as the Super Bowl LIII. No matter who chooses to deflect with this narrative and continue to mix these two in the same message, it is not so and cannot be made so by anyone speaking it.”

R&B sister act Chloe x Halle will be performing “America the Beautiful” at the Super Bowl says the NFL. The Atlanta born-and-bred duo, who sang the national anthem for the 2017 NFL Draft, were discovered via YouTube by Parkwood Entertainment, a record label founded by Beyoncé in 2010. The pair also opened for Jay Z and Beyoncé’s domestic On the Run II Tour in 2018. 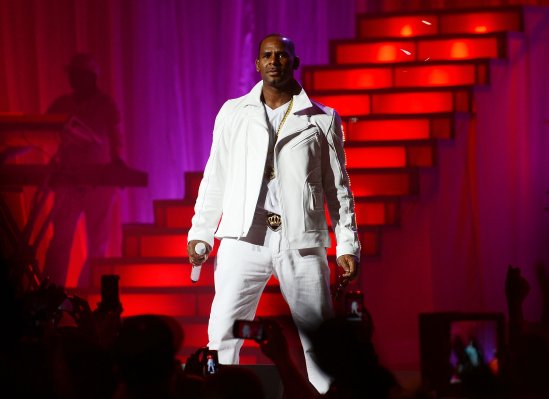 Here Are the Artists Who Removed Their R. Kelly Collaborations From Streaming Platforms
Next Up: Editor's Pick