Democratic Candidates Had Tough Words for China at the December Debate

When asked about how the U.S. should address the Chinese government’s alleged human rights abuses, South Bend, Ind., Mayor Pete Buttigieg brought up the protests in Hong Kong as part of his answer.

“If they perpetrate anything like Tiananmen Square when it comes to Hong Kong, they will be isolated from the free world, and we will lead that isolation diplomatically and economically,” Buttigieg said, referring to the Communist Party’s brutal crackdown on pro-democracy protesters in 1989.

Billionaire Tom Steyer also touched on the pro-democracy protests in Hong Kong, which have gripped the Chinese territory since June.

The U.S. should not respond on its own, he said, but should instead gather a “coalition of democracy and freedom loving partners and allies to push back.”

Steyer added that the U.S. should treat China like a “frenemy.”

“We actually can’t isolate ourselves from China,” he said. “We need a good relationship with them and we’re going to have to work with them.”

“What we have to make clear is that we are not going to abide by what they’ve done. A million Uihgurs are in concentration camps,” Biden said.

Biden was referring to the crackdown on the predominately Muslim ethnic minority group in Xinjiang in western China.

He added that a military build up in Asia might be necessary to stop China.

“We should be moving 60% of our sea power to that part of the world to let, in fact, the Chinese understand that they’re not going to get any further, we are going to be there to protect other folks,” Biden said.

“We don’t have to go to war but we have to make clear that this is as far as you go, China.”

CNN journalist Will Ripley posted on Twitter that the network’s debate live feed cut out in Beijing during the segment on China. 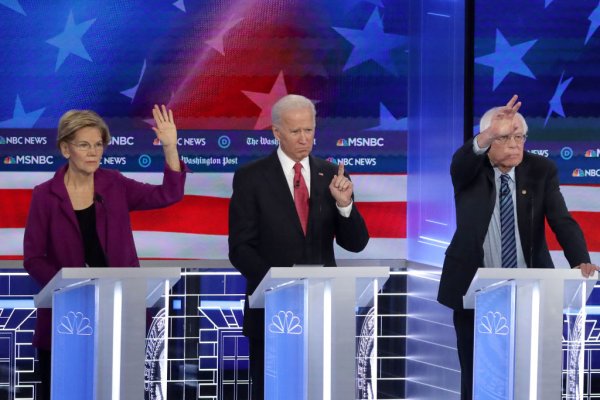 What to Know About Tonight's Democratic Debate
Next Up: Editor's Pick