Despite Harassment, Vandalism and Protests, the World's Only Tiananmen Museum Just Reopened in Hong Kong

A photograph of a statue of the "Goddess of Democracy" during the 1989 pro-democracy movement in Beijing, is displayed at the June 4th Museum in Hong Kong on April 26, 2019.
Vincent Yu—AP
By Amy Gunia / Hong Kong

Visitors to Hong Kong’s History Museum can take the subway to the city’s Tsim Sha Tsui neighborhood, a bustling tourist and shopping district. There they’ll find a sprawling 190,000 square foot facility where visitors can wander through three stories of exhibits on events that have shaped the history of Hong Kong and China, from the Opium Wars to the Japanese occupation of Hong Kong during World War II.

But there’s one event that cannot be found on display: the 1989 Tiananmen Square Massacre.

To find out about that, visitors need to get back on the the subway and go two stops further into Kowloon and the city’s blue-collar Mongkok district. From there, it’s a short walk through markets with stalls hawking cheap clothing and electronic goods to an unmarked doorway of a nondescript commercial building lodged between a gas station and a noodle shop. Inside is the world’s only museum dedicated to the events of June 4, 1989.

The door to the June 4 Museum was easy to find on Friday afternoon, when it celebrated its re-opening in a new location after a three-year closure. About 20 pro-Beijing protestors attempted to block the entrance, with police repeatedly asking them to step aside.

Their screams, blasted through megaphones, could be heard from the museum on the tenth floor of the building, where—in a space the size of a one-room apartment—an exhibition details the history of the 1989 student-led democracy movement that was crushed by Chinese military force. Video footage of tanks rolling into Tiananmen Square, guns firing and an injured protestor receiving CPR plays on a loop on the far wall.

“They’re trying to stop us from opening. No idea which organization they are from, but certainly its an agency of the Chinese Communist Party,” says Kennis T., a member of the Hong Kong Alliance in Support of Patriotic Democratic Movements in China, which runs the museum. He declined to give his last name for fear of safety.

The museum almost did not make its planned opening date. Less than three weeks ago, vandals broke into the property and threw salt water into its electric sockets. Luckily, precious exhibit items—like a bullet-riddled helmet worn by a student protestor on the night of the crackdown, which killed what is believed to be thousands of people—had not yet been moved into the new space. After the incident, 24/7 security was put in place.

“It must be politically motivated,” Albert Ho, chair of the Hong Kong Alliance, tells TIME. There must have been a plan, he says “to destroy exhibition material so as to delay the opening of the museum.”

The protests and the break-in are not the first challenges Ho and his team have faced. The museum, which began operating as a roving display at various locations in 2012, officially opened at a space purchased by the Hong Kong Alliance in 2014. It became an important educational resource.

Read More: The Tiananmen Massacre Is One of China’s Most Censored Topics. Here’s a Look at What Gets Banned

Denise Ho, an assistant professor of history at Yale University who studies modern Chinese history, tells TIME that she was touched by the mainland Chinese visitors she met when visiting the museum a few years ago. “One in particular told us that he came to visit because he felt that he couldn’t learn about the Tiananmen movement at home, so he made a point to visit the museum when he traveled to Hong Kong,” she says.

But the building’s security guards forced guests to register identification details before going upstairs, and ensured they were aware of security cameras capturing their entrance. This particularly unnerved the visitors from mainland China, where the topic of Tiananmen is off-limits. Eventually, building management filed a lawsuit arguing that the site was not permitted to operate as a museum. Instead of fighting an expensive legal battle, organizers decided to close the facility. It shut its doors in July 2016.

Nearly thirty years on, it is still difficult for ordinary Chinese to find out about the events of 1989. The Chinese government has not accepted responsibility for the massacre. An official investigation was never held, and the government did not release information about those who were killed. In the mainland, activists have been detained for commemorating the killings. Internet searches for any terms related to Tiananmen—even the date of the incident—are blocked by China’s censorship apparatus..

“The Chinese government has done a thorough job erasing June Fourth from the historical memories of most of the young people in China, but the older generation in China who were alive at that time, and world outside China, have not forgotten these events,” says Andrew Nathan, a professor of political science at Columbia University, who co-edited a book, The Tiananmen Papers, which released secret Chinese government documents about the event.

Despite the harassment suffered by the June 4 Museum, Chinese censorship has not yet reached Hong Kong, a semi-autonomous enclave, and citizens can freely Google the words “Tiananmen Square Massacre” and see pictures of the notorious tank man facing off to a row of Chinese tanks. Every year, tens of thousands of people gather for a candlelight vigil to commemorate the anniversary, an event organized by the Hong Kong Alliance.

Nevertheless, there are concerns over the mainland’s increasing encroachment. Hong Kong’s freedom of the press rankings have been on a precipitous slide in recent years. Late last year, a foreign journalist was expelled from the city after he hosted a talk with the leader of a pro-independence party. Not long after, a talk that was to be given by Chinese dissident writer Ma Jian, whose books have been banned on the mainland for the last 30 years, was inexplicably cancelled, before being re-instated.

Despite the headwinds, Ho says that the Hong Kong Alliance plans to keep the museum open for as long as possible.

“We are able to make use of the limited liberty we enjoy in Hong Kong,” Ho says. “We have the responsibility to continue to voice the conscience of the nation and in particular, to preserve the memory of the people and the truth of history.” 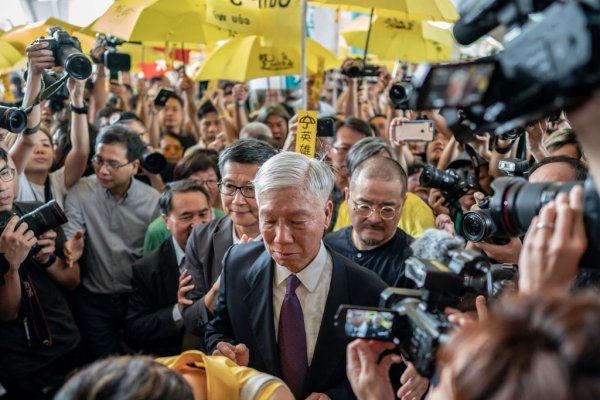