A human rights group has called on the Chinese government to release an undetermined number of Uighur children being arbitrarily held in so-called “child welfare” institutions and boarding schools in Xinjiang.

In a statement Monday, the New York-based Human Rights Watch (HRW) said “Chinese authorities have housed countless children whose parents are detained or in exile in state-run child welfare institutions and boarding schools without parental consent or access.”

An estimated one million Uighurs and other Turkic Muslims are held in Chinese political reeducation camps in Xinjiang. HRW says an additional unknown number are held in prisons and other detention centers.

The rights group’s China director, Sophie Richardson, said “The Chinese government’s forced separation of children is perhaps the cruelest element of its oppression in Xinjiang. Children should be either immediately returned to the custody of relatives in China or allowed to join their parents outside the country.”

According to HRW, Xinjiang government documents do not indicate whose consent is needed for children to be held in institutions, which government agencies make decisions about removals, or “whether there are procedures for determining consent or challenges to such determinations.”

It added that it was “deeply concerned about practices in these facilities that appear to deny children their basic rights and cultural heritage,” pointing out that the children were taught in Chinese instead of their own language, and made to “sing and dance to propagandistic songs.”

Beijing’s treatment of Uighurs has been strongly condemned. In July, U.S. Secretary of State Mike Pompeo called China’s treatment of the Muslim minority group the “stain of the century.” 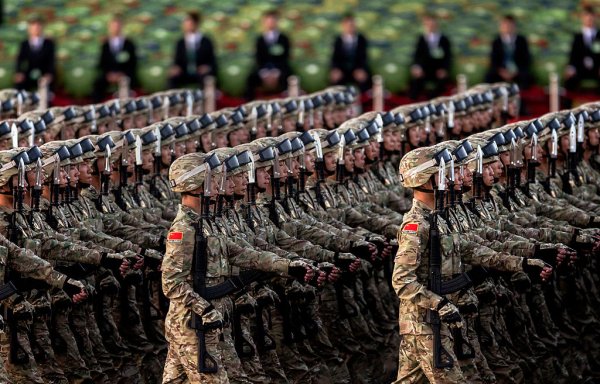 China and the U.S Are Fighting a Major Battle Over Killer Robots and the Future of AI
Next Up: Editor's Pick