'We Have to Keep Fighting.' Thousands of Hongkongers March on Six-Month Protest Anniversary

Hongkongers returned to the streets Sunday for a massive march displaying ongoing support for the antigovernment demonstrations that have seized the Chinese-ruled territory for six months.

While chanting “Fight for freedom, stand with Hong Kong,” and singing the protest anthem, demonstrators young and old wound their way along the now standard route from Victoria Park in the high-traffic shopping area of Causeway Bay to Chater Road in the center of the financial district. The mass of black-clad figures held up signs urging each other to persist, beat drums and repeated calls for greater democracy as surveilling helicopters buzzed overhead.

Police gave advocacy group Civil Human Rights Front (CHRF) approval to hold the protest, the first time the organization has been granted an official green light for a march since August. As many as 800,000 people attended the mostly peaceful assembly, according to CHRF, which hoped the huge crowd would signal to the Hong Kong government and its political masters in Beijing that the protracted movement has not lost steam.

“The rally today properly demonstrates the resilience and persistence of Hong Kong people in this struggle,” says Eric Lai, one of the march conveners. “People are not giving up.”

While protests have taken an increasingly violent turn in recent weeks, with sieges of university campuses and intensifying attacks on subway stations and shopfronts, Sunday’s march was more subdued. Some protesters vandalized businesses along the route, and reportedly set a fire outside the high courts. But the majority marched in a patient queue and some brought their families out, a rare sight now that the movement has been riddled with tear gas, rubber bullets and even live ammunition.

“I am exhausted internally and physically, but I will never say that I’m tired … and never give up,” says Eric, a 38-year-old who joined the march alongside his wife and their two and and five-year-old daughters. “We brought our children with us today,” he adds while cradling his sleeping toddler. “We hope in the future they can live in a place with a civil society, where we can have our liberties.”

Millions have thronged to the streets over the past six months seeking to preserve Hong Kong’s civil liberties and semiautonomy from perceived authoritarian encroachment. Sparked by a now-withdrawn extradition bill, the movement has since evolved into a broader challenge to Beijing’s hold over the city, which retroceded to China in 1997. Demands have expanded to include greater democracy and an inquiry into the police’s use of force.

At the beginning of the movement in June, CHRF organized some of the biggest peaceful marches, estimating crowd sizes of first one and then two million at separate weekend protests.

Since then, police have banned many of the rallies, processions and public events, citing organizers’ inability to ensure the gatherings would not end in violent confrontations between protesters and police. With many of the events deemed “unlawful,” protesters have dwindled in number and become more violent.

Nearly 6,000 people have been arrested in the protests since June, three demonstrators have been shot by police and one protest detractor was set on fire.

Hours ahead of the Sunday march, police announced they had seized a semi-automatic pistol, five magazines and over 100 bullets they believe were intended for use during the march. Eleven people aged between 20 and 53 were arrested during three raids that also produced sabres, daggers, batons and pepper spray, local news broadcaster RTHK reported. Senior superintendent Li Kwai-wah said it was the first time in the half year of protests that a handgun was found.

Despite increasingly radical acts of civil disobedience, polls have shown widespread support for the movement’s demands. Sunday’s march was widely seen as another way to gauge the ongoing momentum.

For much of the afternoon, the two mile route across the island was flooded with a dense crush of people. The procession crammed into narrow thoroughfares and at times was locked in a standstill.

“The police, the Hong Kong government, they have been indifferent to our voices,” says Au a 65-year-old protester. Despite the unresponsiveness, she insists she will keep fighting to ensure the protesters are heard, even if it means she personally has “to take to the frontlines.”

Protesters told TIME they hoped the day would end peacefully. While recent demonstrations have involved protesters charging police lines, using bows and arrows and setting roadblocks of burning trash, even the young radicals said they hoped the event would end without clashes, though some warned they would not hesitate to get aggressive if the police cracked down.

“Nobody wants to see violence happen tonight, but it will depend on what the police are going to do. We’re just doing everything we can to protect our home.” says Ahjai, a 15-year-old protester who put on thick gloves in preparation for extinguishing tear gas canisters.

As evening fell, protesters formed a front line on Des Vouex Road. They donned gas masks and some crouched under a row of umbrellas while police phalanxes and a water cannon hovered nearby. Police issued a statement warning protesters not to deviate from the pre-approved route and “to disperse after the procession” or action would be taken.

It remains unclear how long protests that have now stretched into the winter will continue, or how far China’s central government will go to assert its grip on the enclave of 7.5 million people.

Sunday’s protest comes two weeks after pro-democracy politicians scored a landslide in local elections, a result that cast doubt on Beijing’s claims that a supposed “silent majority” opposes the demonstrations.

The victory injected fresh momentum into the protest movement. Yet many demonstrators are pessimistic when it comes to winning further concessions, admitting that it is unlikely the government, or Beijing will compromise.

As the unrest has morphed from weekend eruptions of street battles into spontaneous lunchtime rallies during the work week, Hong Kong’s reputation as one of Asia’s safest cities has eroded. For the first time since the global financial crisis a decade ago, the city tipped into a recession.

Organizers billed the latest march as a “last chance” for the city’s embattled leader Carrie Lam to meet the protest demands. If the government does not respond to the latest turnout, then protesters say they intend to stage another strike snarling traffic and disrupting morning commutes on Monday.

“We have to keep fighting,” says Dave, a 45-year-old architect who joined the march. “An independent inquiry into the police is the most important demand. And [Chief Executive] Carrie Lam has to resign. She needs to go away.”

Write to Laignee Barron at Laignee.Barron@time.com and Amy Gunia at amy.gunia@time.com. 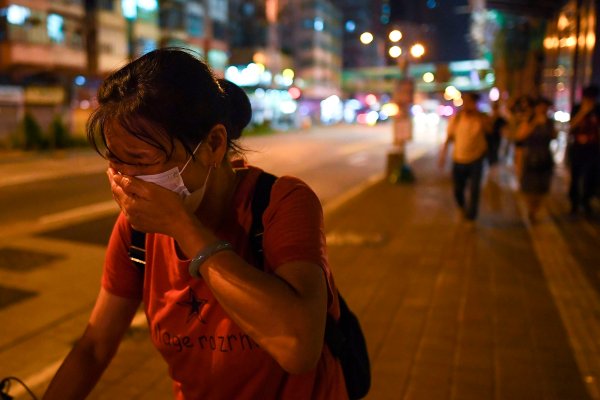