Pompeo Calls China's Treatment of Uighurs the 'Stain of the Century'

U.S. Secretary of State Mike Pompeo called China’s treatment of Uihgurs, a Muslim minority group, the “stain of the century” while speaking at a conference in Washington D.C. Thursday, Reuters reports.

The State Department estimates that between 800,000 to 2 million Turkic Muslims, including Uighurs, ethnic Kazakhs, Kyrgyz and others, are being held in internment camps that Beijing has called “re-education” centers. Uighurs, a predominantly Muslim ethnic group, make up roughly 40% of the population of the northwestern province of Xinjiang.

“China is home to one of the worst human rights crises of our time; it is truly the stain of the century,” Pompeo said, speaking at a U.S.-hosted conference on religious freedom, according to Reuters.

“Is that consistent with the guarantee of religious belief that is found directly in the Chinese constitution?” he asked, reports Reuters.

U.S. officials have repeatedly denounced China’s detention of Muslim minorities, and Reuters reports that the Trump administration has been considering implementing sanctions over their policies in Xinjiang. Tensions are already running high between the U.S. and China, who are in the midst of a damaging trade war.

China has defended the detentions as a means of combatting terrorism, and has tried to pass the camps off as “vocational training” centers similar to “boarding schools.” On Thursday, the country further defended its actions.

“In China this situation of so-called religious persecution does not exist,” Chinese foreign ministry spokesman Lu Kang said at a press conference in Beijing after the White House ceremony, according to Reuters. “We demand that the United States correctly view China’s religious policies and the status of religious freedom in China, and stop using the issue of religion to interfere in other countries’ affairs.”

Researchers also have evidence that the Chinese government is destroying mosques in the region, in a further attempt to wipe out Islamic identity in the country.

Last week, 22 countries signed a joint letter to the U.N. condemning China’s mass detention of Uighurs and calling on the country to end the practice. In response, 37 countries including Myanmar, North Korea, Russia and Saudi Arabia signed an open letter praising Beijing’s “remarkable achievements in the field of human rights.” 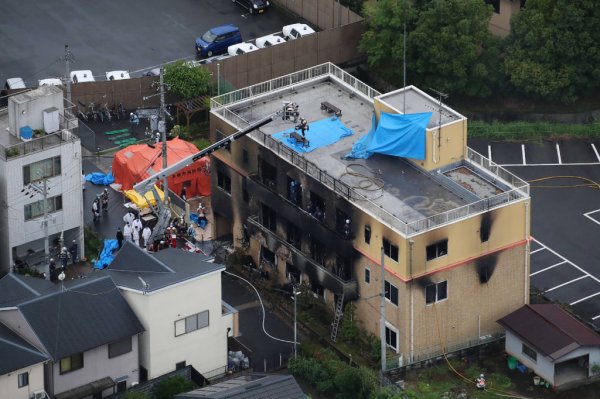 A Fire at Kyoto Animation Killed 33 People. Here's What to Know About the Deadly Arson Attack in Japan
Next Up: Editor's Pick