As Pete Buttigieg Surges in Iowa Ahead of Debate, Fellow Democrats Sharpen Their Attacks

Staffers on other Democratic campaigns call him “Sneaky Pete” or “Mayor McKinsey” because of his ties to the business community. Others assail him as “Mayo Pete” or “Cream of Pete” because he’s so white, and at least one aide to an opposing candidate has dubbed him “Benjamin Button,” after the old man who looks like a baby.

Democrats have been quietly sniping at Pete Buttigieg for months, but now that the millennial mayor is surging in Iowa and in the top tier in New Hampshire just days ahead of the next Democratic debate, the knives are coming out. A Des Moines Register poll over the weekend found that 25% of of likely caucus-goers list him as their first choice, while the other top tier candidates—Warren, Sanders, and Biden—were basically tied for second. High-ranking Democrats are now openly attacking the unlikely contender as inexperienced, out-of-touch with voters of color, and insufficiently progressive. In a field divided by ideology, experience, race and gender, hating Pete Buttigieg has become the one thing almost everyone can agree on.

One major point of criticism is Buttigieg’s relative lack of experience, especially compared to many of the women and nonwhite candidates who have served in the U.S. Senate or the Cabinet. Sen. Amy Klobuchar suggested that if she and other female candidates had Buttigieg’s resume, “I don’t think people would take us seriously.” Former San Antonio mayor and former HUD Secretary Julian Castro, who is polling at the bottom of the field, registered a similar complaint: “I was mayor of a city that’s 14 times larger than South Bend,” he told Trevor Noah on The Daily Show. “In fact, we could almost fit South Bend in our Alamodome in San Antonio.” Sen. Kamala Harris, who spent twenty years rising through the ranks in California before being elected state attorney general in 2010, dismissed him “naive” on CBS.

“If you’re Cory Booker or Julian Castro and you look at your record, you see people praising Pete for a record that doesn’t even come close,” says progressive strategist Rebecca Katz. “No-one would ever take a woman of color who is from a working class background who represents more people than he does seriously,” said Justice Democrats spokesman Waleed Shahid. “Few people took Bernie Sanders seriously and he was the mayor of Burlington and a senator.”

Buttigieg spokesman Chris Meagher acknowledged the irritation. “We get it,” he said. “We’re the outsider upsetting the apple cart.”

Critics are particularly eager to point out Buttigieg’s struggles to reach black voters, as well as his missteps in black voter outreach. Black voters in South Carolina have remained cool to the young mayor’s campaign, and a recent Intercept report described the Buttigieg campaign exaggerating black support for the candidate’s Douglass Plan. (His campaign quickly pushed back against the Intercept’s reporting.) “His campaign continues to betray a disregard for the people of color who are our party’s backbone,” says a staffer from a rival campaign.

Buttigieg’s unlikely rise from 38-year old gay veteran mayor to top-tier presidential contender has been one of the most surprising narratives of the 2020 primary, which is one reason why he’s gotten so much press. He also offers much more media access than his opponents, which makes it easier for reporters to write stories about him. But that avalanche of press—and the money and attention that comes with it—rankles, especially when it seems to come at the expense of women and nonwhite candidates.

“The contrast between the volume and the tenor of press about Warren’s campaign and Pete’s campaign is the embodiment of the adage that men can have potential and women have to have met it,” says Christina Reynolds, a spokeswoman for Emily’s List, which works to elect pro-choice Democratic women. “He got better press when he was at 1% than what she’s getting now that she’s tied for the lead.”

Progressives have long griped on Twitter that Buttigieg is too moderate, but in recent weeks, that antagonism has sharpened into public attacks. Justice Democrats, the progressive group that helped elect Alexandria Ocasio-Cortez and the rest of the Squad, recently published a press release describing Buttigieg’s “flip flops” on Medicare for All, accusing him of first supporting the policy, then changing his position after accepting donations from pharmaceutical executives. Buttigieg, who supports a health care reform that would preserve a role for private insurance (“Medicare for all who want it,” as his campaign tagline has it), says that the definition of the policy had changed, not his position. “Only in the last few months did it become the case that Medicare for all was defined by politicians to mean ending private insurance,” he told the Nevada Independent. “I’ve never believed that that’s the right pathway.”

Given his stratospheric rise in recent weeks, strategists warn that this is likely just the beginning of an onslaught of new criticism of Buttigieg from fellow Democrats. “He’s been attacking a lot of his opponents for a while now without having any real incoming. What record he does have has not been looked into in a serious way. He’s got a glass houses problem,” says Katz. “I don’t think the Pete pile-up has started, but he’s long overdue for one.” 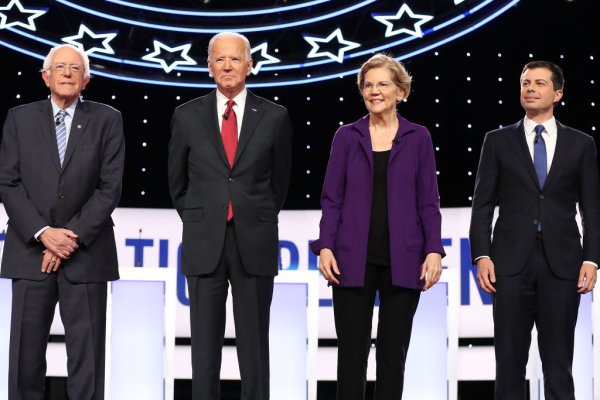 November's Democratic Debate: Everything to Know
Next Up: Editor's Pick