Does the U.K. Election Hold Lessons for the Democrats? Not Exactly, Experts Say

As the U.K. election results trickled through Thursday evening, the disintegration of the Labour Party and its far-left leader Jeremy Corbyn began to make waves across the Atlantic.

In San Francisco, the Democratic Presidential candidate Joe Biden hinted it was a reason not to trust his more leftwing rivals Bernie Sanders or Elizabeth Warren with the nomination. “Look what happens when the Labour Party moves so, so far to the left,” the former Vice President said at a fundraiser for his 2020 bid, speaking as it was becoming clear Britain’s main opposition party was on the way to its lowest showing in the British parliament since 1935. When the defeat was confirmed, Corbyn, who proudly calls himself a socialist and counts Sanders as a friend and political ally, said he would stand down before the next election.

The temptation to compare Corbyn with Sanders makes sense. They’re both radical left-wingers who have spent a lifetime on the margins, mounting challenges to their parties’ political establishments. And it’s easy to see the parallels between the Brexit referendum in 2016 and Trump’s election a few months later, too — as the President himself has noted. Each was influenced by populist campaigns, and driven by voters from working classes in former industrial regions who felt forgotten and alienated by metropolitan elites. In Britain in 2019, those same groups of voters deserted the Labour Party in droves, allowing the Conservatives to win an overwhelming majority.

But Biden’s comparison stops making sense there, according to experts. “It makes for an easy talking point for Joe Biden, but once you start thinking about it a little bit, there are lots of ways where it’s not comparable,” says Chris Anderson, a professor of comparative political behavior at the London School of Economics.

For one, it’s not clear that Corbyn’s leftwing policies (like higher corporate and income taxes for the rich, and more investment in public services and infrastructure) were the factor that lost him the election. In fact, polling shows those policies were broadly popular among the British electorate. Sixty-four percent of British voters support Labour’s policy of increasing income taxes for people earning over £123,000 ($164,000), according to a survey by YouGov. Policies on spending more on healthcare are popular, too. “If you ask the average U.K. voter, should we spend more money on the National Health Service, you get a resounding ‘yes’,” Anderson says.

The same goes for Sanders’ and Warren’s plans in the U.S, he adds. “If you ask the average American voter, should there be a risk of being bankrupted by medical bills, they would say no, people should be protected. These policies aren’t particularly controversial.”

The Labour policy that had the most significant impact on the race was its approach to Brexit, which has no obvious analog in American politics. Analysts say Johnson’s winning campaign slogan “Get Brexit Done” was a key factor in his victory.

Beyond policy, Corbyn himself was deeply unpopular among voters. His net approval rating among 3,005 U.K. adults on Dec.10 was -30, 16 points lower than Johnson. “To be honest the biggest factor of all in Labour’s defeat was Jeremy Corbyn, who is seen as unpatriotic, indecisive, absolutely incompetent, as weak, and quite frankly soft on terrorism, security and crime,” says Tim Bale, professor of politics at Queen Mary, University of London.

Neither Sanders nor Warren have those associations among U.S. voters. In a Gallup poll of 1,500 Americans in 50 states published on Nov.15, Warren had a net rating of -5 while Sanders had +1 (the poll had a ±3 margin of error). “What we know about Jeremy Corbyn was that he was a deeply unpopular opposition leader, the most unpopular we’ve had since we began polling.” Anderson says. “I would imagine that none of the Democratic candidates would be as deeply unpopular as Corbyn is with average voters.”

Another plank of Biden’s argument was that not only were Corbyn, Sanders and Warren cut from the same cloth, but their opponents—Johnson and Trump—are, too. “You’re also going to see people saying, my God, Boris Johnson, who is kind of a physical and emotional clone of the President, is able to win,” Biden said Thursday night.

It’s true that, in a Trump-like manner, Johnson’s political capital has been largely unaffected by the insulting comments about women, Muslims, black people, Britain’s colonial history, and more that he has made in his past. It’s also true that he has embraced populist campaigning, regularly telling outright lies for political gain with few repercussions.

But Johnson at least claims to be a “one nation” Conservative. On the steps of 10 Downing Street on Friday, he called on the U.K. to “find closure and let the healing begin” after the result. His manifesto promised an end to the years of austerity pursued by his party (even if its pledges didn’t go all the way to replacing what the party had cut), and not only accepted the existence of the climate crisis but pledged a net zero carbon economy by 2050.

Trump, on the other hand, denies that man-made climate change exists at all and has moved to withdraw the U.S. from the Paris agreement on limiting greenhouse gas emissions. His loyal supporters are further apart from other voters than ever, Anderson says, in part because of the ongoing efforts by Democrats to impeach him.

While Britons have undoubtedly been polarized by Brexit, they are not divided along party lines in the same way as voters are in the U.S. In 2019, some U.K. voters who had never voted Conservative chose to lend their votes to Johnson to resolve the issue — something the U.K. Prime Minister acknowledged in his acceptance speech.

In short, few believe the lessons for U.S. Democrats in the U.K. election are anything but limited. “This is super helpful to Biden. This is why he’s talking about it. It’s a way of saying ‘Bernie is an extremist, he can’t win, stay away from him,’” says Anderson. “There’s a kernel of truth in that to beat Donald Trump you need to appeal to middle-of-the-road voters, but beyond that, it’s much too facile a comparison.” 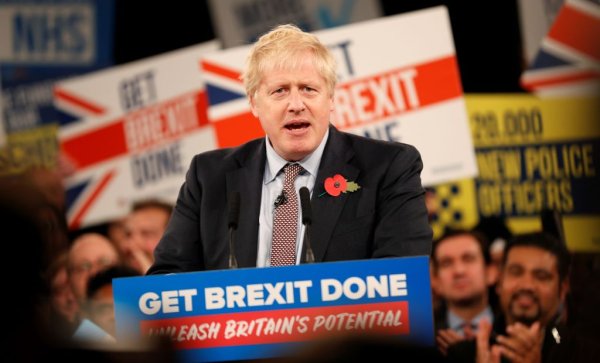 'Get Brexit Done.' The Slogan That Won Britain's Election
Next Up: Editor's Pick