Boris Johnson Is Likely to Be Britain's Next Prime Minister. Who Is He?

Boris Johnson is all but certain to become Britain’s next Prime Minister next month, following the resignation of Theresa May.

The race to succeed May as leader of the ruling Conservative Party is ongoing, but Johnson is the clear frontrunner and has only one remaining opponent, Jeremy Hunt. The winner of that race will be decided in a ballot of the 124,000 or so card-carrying Conservative Party members. They are significantly more right-wing, more pro-Brexit and more white than the average British citizen. And Boris Johnson is their darling.

So, barring a catastrophic collapse in support, Johnson is likely to be Britain’s next PM. Here’s what to know about him.

Who is Boris Johnson?

Johnson is a Conservative lawmaker and former journalist. He is known for being a former Mayor of London and a leading figure on the “leave” side of the 2016 Brexit referendum. Following his side’s success, he was installed as Foreign Secretary. After a tenure characterized by gaffes, he stepped down in July 2018 over May’s Brexit negotiating strategy. Now he is a so-called “backbench” lawmaker who doesn’t hold government office, but is still seen as a leading Brexiter.

The son of British politician Stanley Johnson, Boris was born Alexander Boris de Pfeffel Johnson and can trace his family line back to King George II.

Johnson went to Eton, the most prestigious private school in the U.K., where he was “a fully fledged school celebrity,” according to Just Boris, a biography of Johnson written by Sonia Purnell. But even as a teenager he was already being reprimanded for what his modern critics still today argue are his failings, including a lack of organization and attention to detail.

He also went to Oxford University, where he was a friend of David Cameron, who would go on to become British Prime Minister. There, they were both members of the so-called “Bullingdon Club” of exclusively male students, which was known for trashing restaurants and being made up largely of scions of the aristocracy.

How did Boris Johnson get into politics?

Johnson started his professional life not as a politician but a journalist. It was in the newsroom that he developed his understanding of the British electorate. But he was fired from his first job, at the Times of London, after he made up a quote.

After being sacked, Johnson moved to the Daily Telegraph. (He was friends with its editor-in-chief at the time, Max Hastings, who also went to Oxford.) He eventually became the newspaper’s Brussels correspondent. His dispatches from the European Union’s headquarters there were seminal in increasing anti-E.U. sentiment in Britain. He is credited with being the originator of “euromyth” journalism, a genre which strengthened readers’ perceptions of the bloc as an overbearing bureaucracy by feeding them (largely false) stories about nonsensical regulations. Reporting on a nonexistent E.U. ban on straight bananas became the touchstone of that genre.

Johnson has said of his time at the Telegraph: “Everything I wrote from Brussels was having this amazing, explosive effect on the Tory party, and it really gave me this, I suppose, rather weird sense of power.” He quickly became a lodestar of the “eurosceptic” wing of the Conservative Party, which at the time was a fringe group.

In 2001, Johnson was elected as a Member of Parliament for a safe Conservative seat. He made regular appearances as a guest on the BBC comedy panel show “Have I Got News For You,” which exposed the wider public for the first time to the bumbling yet toffishly eloquent personality that he had cultivated at Eton.

What did Boris Johnson do as Mayor of London?

Johnson became London’s Mayor in 2008, after facing off against Ken Livingstone, a two-term incumbent. He victory came largely through winning votes from London’s more affluent outer boroughs at the expense of the poorer, more ethnically diverse inner city.

In the job, he would “frequently [seek] to assert his superiority over employees or visitors by thrashing them in games of ping-pong over the Mayoral desk,” according to Purnell’s biography of Johnson.

In his eight years in the post, he presided over the 2011 London riots, the 2012 London Olympics (which were not organized by his office) and the introduction of public bicycles that have come to be popularly known as “Boris bikes” despite the scheme being the work of his predecessor.

What is Boris Johnson’s stance on Brexit?

Ahead of the 2016 Brexit referendum, despite all the time he spent bashing the E.U. as a Brussels correspondent, Johnson couldn’t decide which side to support.

On one hand, his own party was leading the U.K. government at the time, and its official line was that leaving the E.U. would be damaging for Britain’s economy and its place in the world. On the other, he had always been critical of the E.U. as an institution, and it looked like the “leave” side was going to lose — what harm would it be to increase his public profile a little by campaigning for the underdogs?

To help him decide, Johnson wrote two newspaper articles, one in favor of “leave” and one in favor of “remain.” He chose the former, and became one of the leading figures in the official Vote Leave campaign, careering around the country on a large red bus plastered with a slogan: “We send the E.U. £350 million a week. Let’s fund our NHS [National Health Service] instead.”

The figure was intentionally misleading — the U.K. receives a substantial amount of that money back in the form of a “rebate” on its membership fees. But Johnson didn’t care. His campaign’s underlying message was that Brexit would make Britain great again. Five months later, Donald Trump would use a similar message to carry himself to victory in the 2016 U.S. presidential election.

Why did Boris Johnson resign as foreign secretary?

Johnson received the biggest promotion of his life so far under Theresa May, who unexpectedly made him her Foreign Secretary when she became Prime Minister in 2016 after David Cameron stepped down following the Brexit referendum.

Johnson’s time at the Foreign Office was characterized by gaffes, including most severely the time he said that British-Iranian citizen Nazanin Zaghari-Ratcliffe, imprisoned in Iran and accused of spying, had been “training journalists” in the country, when her family insisted she was just on holiday. Critics have accused Johnson of giving the Iranian regime further reason to keep her imprisoned. She is still incarcerated.

Johnson resigned from May’s cabinet in July 2018 over his disagreement with her Brexit negotiating strategy. But in March, he voted to ratify her deal with the E.U. in a Parliamentary vote. However, he later backtracked on his support.

What are the biggest controversies surrounding Boris Johnson?

Johnson has been accused of racism. As a columnist for the Telegraph, he has referred to Africans as “piccaninnies” with “watermelon smiles.” He also once suggested that President Barack Obama had an “ancestral dislike” for the U.K. because he was part Kenyan.

In August 2018, Johnson compared Muslim women who wear the burqa to “bank robbers” and “letterboxes,” drawing accusations of Islamophobia and pandering to the far-right.

As editor of the Spectator, a right-wing magazine, Johnson attracted furore when he allowed an article to be published which argued that race and intelligence were connected. “Orientals … have larger brains and higher IQ scores,” the story, not authored by Johnson, said. “Blacks are at the other pole.”

Johnson has also been accused of homophobia; he once called gay men “tank-topped bumboys” in a newspaper column.

His love life is a subject of great interest too. He has had numerous affairs, and divorced his second wife last September. He has at least five children, including one with a woman with whom he had an affair while married. His new girlfriend, Carrie Symonds, is a Conservative Party staffer 23 years his junior who is now reportedly masterminding his leadership campaign.

Early on June 21, police were reportedly called to Johnson’s South London residence where he lives with Symonds after neighbors heard the pair arguing. A neighbor told The Guardian they heard a woman screaming followed by “slamming and banging”. In a recording obtained by The Guardian, Johnson can be heard shouting “get off my f****** laptop” at Symonds, who was heard telling the MP to “get off me” and “get out of my flat”. A neighbor said they decided to call the police after knocking on the door but receiving no response. “I [was] hoping that someone would answer the door and say ‘We’re okay’. I knocked three times and no one came to the door,” a neighbour told The Guardian.

“Police attended and spoke to all occupants of the address, who were all safe and well,” London police said in a statement released later that evening. “There were no offenses or concerns apparent to the officers and there was no cause for police action.” Johnson has so far refused to answer questions about the event. 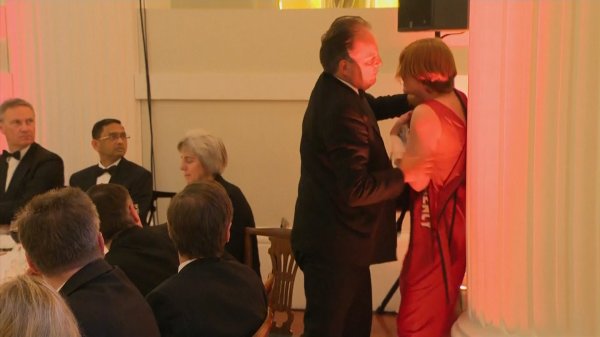 A British Politician Grabbed a Climate Protester by the Neck and It's Dividing the U.K.
Next Up: Editor's Pick