The @CCHQPress account, renamed "factcheckUK" during an election debate on Nov. 19, 2019
Screenshot
By Billy Perrigo

Boris Johnson’s Conservative Party was criticized for misleading British voters on Tuesday night, after one of its political Twitter accounts masqueraded as a fact-checking service during an election debate.

Twitter criticized the Conservative Party for the move, but stopped short of banning the account or removing its blue “verified” tick, which signals that the account is who it says.

“Any further attempts to mislead people by editing verified profile information – in a manner seen during the U.K. Election Debate – will result in decisive corrective action,” Twitter said in a statement.

They added, “Twitter is committed to facilitating healthy debate throughout the U.K. general election. We have global rules in place that prohibit behavior that can mislead people, including those with verified accounts.”

A Twitter spokesperson refused to detail to TIME what kind of “corrective action” was under consideration.

During the debate, the rebranded “factcheckUK” account shared tweets attacking the Labour Party — some preceded by the word “FACT” — and retweeted Conservative cabinet ministers.

One tweet said Labour would spend £1.2 trillion ($1.6 trillion) if elected in December. But Full Fact, an actual fact-checking organization, debunked that claim. “Many of the figures behind this estimate are uncertain or based on flawed assumptions,” Full Fact said, adding that the Labour manifesto had not yet been released.

Full Fact also criticized the Conservatives for the misleading rebrand. “It is inappropriate and misleading for the Conservative press office to rename their twitter account ‘factcheckUK’ during this debate. Please do not mistake it for an independent fact checking service,” they tweeted.

On Wednesday, the U.K.’s Electoral Commission issued a veiled statement criticizing the Conservatives for the deception. “Voters are entitled to transparency and integrity from campaigners,” it said. “We repeat our call to all campaigners to undertake their vital role responsibly and to support campaigning transparency.” (The Electoral Commission regulates campaign spending, not the content of political campaigns.)

The move prompted swift condemnation from Labour politicians, too. “Twitter should ban @CCHQPress from their site,” tweeted lawmaker David Lammy. “It’s not a fact check service, it’s a disinformation machine that would make Vladimir Putin blush.”

The E.U.’s Brexit coordinator, Guy Verhofstadt, also called the move “dystopian.” “Not even [Hungarian Prime Minister Viktor] Orban or the Polish [ruling party] PiS would dream this up, let alone do it,” he added.

Amid the condemnation, the Conservative Foreign Secretary Dominic Raab appeared on TV on Wednesday morning to defend the CCHQ Press team. “No one gives a toss about the social media cut and thrust,” he told BBC Breakfast. 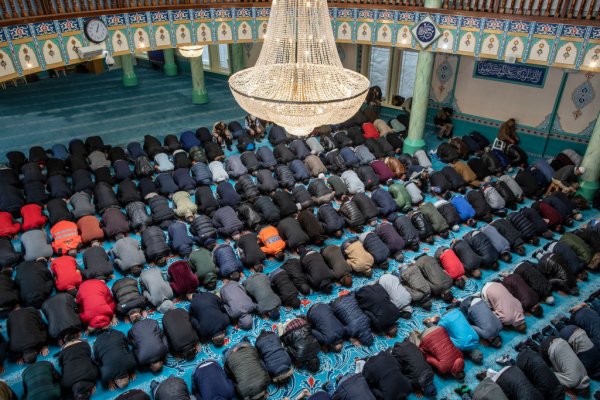 British Muslims Can Swing the U.K. Election, But Only If They Get Out and Vote
Next Up: Editor's Pick