“Get Brexit Done.” That was the slogan repeated on every billboard, pamphlet and doorstep during the Conservative Party’s campaign for the U.K. election, held on Thursday.

And when the results came through overnight, it was clear those three words had helped win Boris Johnson’s party an overwhelming majority, with at least 364 seats in parliament up from 318 two years ago, the party’s biggest victory since the 1980s under Margaret Thatcher.

The additional seats won by the Conservatives largely came from the “red wall,” a swath of largely ex-industrial, working class areas traditionally held by the Labour Party — but also ones where people overwhelmingly voted to leave the European Union at the Brexit referendum in June 2016.

Three and a half years later, Britain is still a member of the European Union, despite Brexit overwhelming the news cycle. The U.K. parliament has repeatedly voted against any withdrawal deal with the E.U., even after Johnson secured a new agreement in October.

Many of the people in those leave-voting northern towns, and elsewhere in the country too, were frustrated at the apparent inability of Britain’s political class to make Brexit happen — and so the Conservatives did everything they could to tap into that frustration.

Focus groups conducted by The Guardian newspaper a week before the election found the strategy of zeroing in on Brexit was breaking through in key marginal constituencies. An Opinium poll taken on Dec. 10-11 found 39% of respondents wanting to pass the Brexit bill Johnson secured with the E.U. in October, and only 15% wanted a further delay (another 30% wanted Brexit to be canceled altogether).

The Conservatives’ clarity of message on Brexit contrasted starkly with Labour, who after years of internal disagreement over Brexit, eventually came out in support of holding a second Brexit referendum if elected, with remaining in the E.U. being one option. They also committed to delaying Brexit in order to renegotiate a better deal. In televised debates ahead of Thursday’s vote, voters in the studio audience criticized the party for having an unclear Brexit position.

It’s not hard to see why, says Bale. “If you compare the two parties, the message discipline exercise by the Conservative Party was incredibly impressive relative to the very diffuse, very confusing signaling coming out of the Labour party.”

Nevertheless, “Get Brexit Done” was a deliberate oversimplification. Britain will be legally out of the European Union by the end of January if lawmakers vote to ratify Johnson’s exit deal, (a virtual guarantee now that Johnson has such a large majority,) but the next stage of Brexit negotiations, on trade, are still yet to come. “It was an illusion,” says Bale, “but a pretty powerful one that Boris Johnson created.”

The slogan wasn’t the first time that the Brexit-supporting wing of the Conservative Party has utilized catchy, focus group research-based messaging to win a national vote. “Take Back Control” was the slogan of the victorious “leave” side during the 2016 Brexit referendum, and the man thought to have coined it, Dominic Cummings, is now one of Boris Johnson’s senior advisers in Downing Street.

“We can’t be certain ‘Get Brexit Done’ was all him,” says Bale. “But given his genius for coming up with slogans that encapsulate a message that resonates with target voters, it wouldn’t be surprising.”

“No one could possibly dispute that it is the will of the British people to get Brexit done,” said Boris Johnson in his victory speech around 7 a.m. local time. “But first, let’s get breakfast done.” 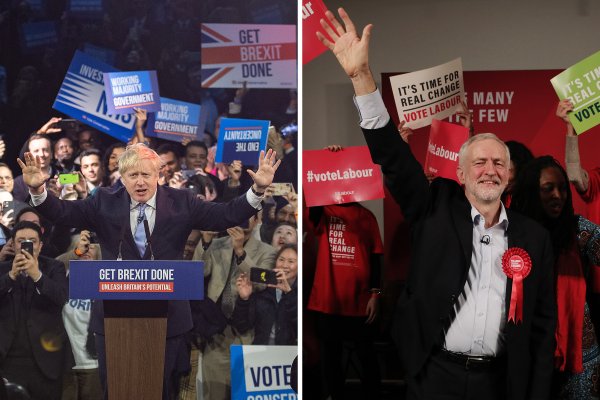 Boris Johnson Wins U.K. Election in a Landslide
Next Up: Editor's Pick