Boris Johnson secured an emphatic victory in the U.K. election held Thursday, with the Prime Minister’s Conservative Party winning a majority of seats in Parliament and a mandate to fulfill its campaign pledge of “Getting Brexit Done.”

As of Friday morning U.K. time, 649 of 650 seats had been declared, according to the BBC. The Conservatives held 364, well over the number needed to guarantee it will form a majority government.

The results showed the opposition Labour Party of Jeremy Corbyn capturing just 203 seats, compared to 262 in 2017.

Corbyn said that he will not lead the party in the next election given the “very disappointing” results, according to the BBC.

The result suggests the paralysis in British politics over Brexit is set to come to an end.

It removes the parliamentary obstacles to Johnson delivering on his pledge to take Britain out of the European Union by Jan. 31 or sooner, and entering the next stage of Brexit negotiations, on trade, which would formalize the divorce.

What are the results so far?

How many seats are needed for a majority?

The number of seats needed to form a majority government is 320, according to the Institute for Government. (This is slightly less than half of the seats in Parliament, because some lawmakers never vote.)

How are the results different from the last election?

At the last election, in 2017, the Conservatives lost their majority but remained the largest party, with 318 seats. Labour came second with 262, having increased their seats by 30.

This time, the Conservatives have increased their seats by at least 47, winning them a long-coveted outright majority.

Labour has decreased their tally by at least 59 seats, to 203, a historic defeat, lower than even the “wilderness years” for the party in the early 1980s. Corbyn, the hard-left leader of the party, will likely come under huge pressure to step down very shortly.

“I think Brexit has dominated,” Labour’s shadow chancellor John McDonnell told the BBC. “We thought other issues would cut through. But the evidence is, it clearly hasn’t.”

The so-called “red wall,” a swath of ex-industrial, historically pro-Labour seats across the north of England and Wales that largely voted to leave the E.U. in 2016, was punctured by the Conservatives.

What do the results mean for Brexit?

With a large majority in parliament, Johnson will find it much easier to get his Brexit deal ratified. (The deal was rejected four times by lawmakers in the 2017-2019 parliament, largely because the Conservatives lacked a majority.)

The ratification will likely happen in January, clearing the way for the U.K. to leave the E.U. before Jan. 31, as promised by Johnson on the campaign trail.

But Brexit won’t be over and done with. The U.K. and E.U. will then enter a “transition period” during which Britain will continue to abide by some E.U. rules until December 2020. In the meantime, representatives of each will enter another, more complex phase of negotiations over a future trade deal. 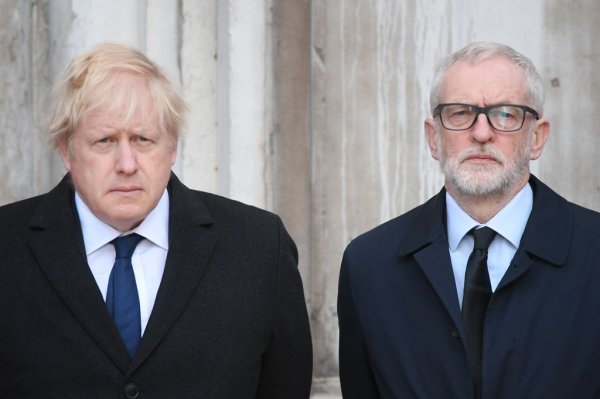 The U.K. General Election on Thursday Will Transform the Country Whoever Wins. Here's What to Know
Next Up: Editor's Pick