The Meaning Behind 5 of the Most Popular Rosh Hashanah Traditions

Rosh Hashanah ushers in the beginning of the Jewish year and is a holiday that celebrates the creation of the world, something that’s reflected in its name, which means “head of the year” in Hebrew.

Rosh Hashanah 2019 will begin at sundown on Sunday, Sept. 29, and will continue through nightfall on Tuesday, Oct. 1, marking the start of the Days of Awe, a 10-day period of reflection and repentance that concludes with Yom Kippur, or the Day of Atonement. Rosh Hashanah starts on the first days of Tishrei (the seventh month on the Hebrew calendar), which usually places it in September or October, and many choose to celebrate the holiday on just one day.

As the Jewish New Year, Rosh Hashanah is one of the holiest times for those who practice Judaism, with many popular traditions that are observed.

Ahead of the year’s first High Holy Day, here’s a look at the history behind five of the most popular Rosh Hashanah traditions.

Those observing Rosh Hashanah often greet one another with the Hebrew phrase, “shana tova” or “l’shana tova,” meaning “good year” or “for a good year.” According to History.com, this is a “shortened version of the Rosh Hashanah salutation ‘L’shanah tovah tikatev v’taihatem’ (‘May you be inscribed and sealed for a good year’).”

The Sounding of the Shofar

One of the most important ways that Rosh Hashanah is observed is with the sounding of the shofar, an instrument made out of a ram’s horn. The blowing of the shofar is not just a tradition, but actually a mitzvah, or commandment, that must be done every morning of Rosh Hashanah, unless the first day of the holiday falls on Shabbat (the Sabbath).

According to History.com, the sound of the shofar is a call to repent and a reminder for Jews that God is their king. History.com also notes that four sets of notes are traditionally played on the shofar for Rosh Hashanah: tekiah, a long blast; shevarim, three short blasts; teruah, nine staccato blasts; and tekiah gedolah, a very long blast.

Lighting Candles in the Evening

While challah bread is eaten for many other occasions (including the weekly Shabbat dinner), it’s tradition to eat round challah during Rosh Hashanah. The unique circular shape symbolizes the cyclical nature of life, as well as the crown of God. Raisins are often added to the dough to symbolize the hope for a sweet new year, as is the practice of dipping the bread into honey instead of salt. Sweetness for a sweet and happy new year is also why many people eat apple slices dipped in honey at the start of a Rosh Hashanah meal, one of the holiday’s most famous practices.

Other holiday eats rich with symbolism that are sometimes served at Rosh Hashanah include pomegranates and fish heads. According to the Jewish Museum in New York City, pomegranates are thought to have 613 seeds in each fruit, which corresponds to the 613 commandments in the Torah. Pomegranates are also sweet, in keeping with the theme of sweet delicacies for a sweet new year. Fish heads are sometimes served and eaten on Rosh Hashanah because of the holiday’s literal meaning, “head of the year,” and in hope that the year will be as bountiful as the fish in the sea.

Performing Tashlich at a Body of Water

According to Chabad.org, it’s customary for some who observe Rosh Hashanah to go to a body of water to perform a Tashlich ceremony, which involves symbolically casting away their sins. Some people literally throw things like bread into the water, and some, following prayers, shake out the corners of their clothes. The ceremony is typically done on the first day of the holiday, unless the first day falls on Shabbat, in which case it’s done on the second day. 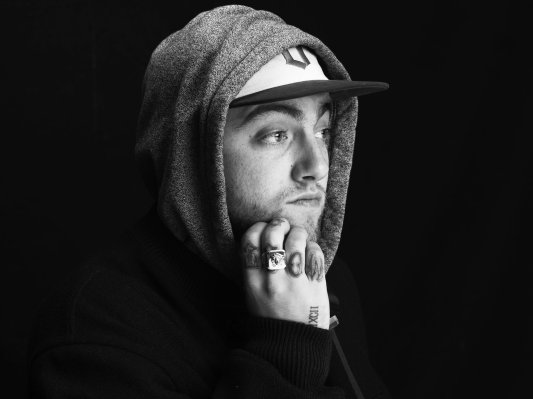 Rapper Mac Miller Has Died at 26
Next Up: Editor's Pick