How Blue and White Became the Colors of Hanukkah

It’s no secret that the American holiday calendar is thoroughly color-coded. The Fourth of July is red, white and blue, for obvious reasons. Halloween has pumpkin orange, and the Thanksgiving table tends to be festooned in the brown and red colors of the harvest season. And as those autumnal hues begin to fade, the red and green of Christmas take their place.

But, though those colors can tend to dominate the American landscape in December, they aren’t the only shades of the season. For Jewish Americans, this time of year is celebrated with the blue and white (and sometimes silver) of Hanukkah.

That color choice has little to do with the the holiday’s religious meaning — and everything to do with 20th century American culture, say experts on the subject.

In the post-World War II United States, as more Jewish families began moving to suburbs, the holiday season presented a problem for parents.

“There was pressure on Jewish kids to participate in celebrating the Christmas pageantry that went on in public schools,” Dianne Ashton, a professor of religion and American studies at Rowan University and the author of Hanukkah in America: A History, tells TIME. “And that increased the pressure on parents, I think, to do something — to make children okay with being Jewish, to be happy to be Jewish when they weren’t celebrating Christmas.”

One solution was to make Hanukkah a bigger deal, despite the fact that it hadn’t previously been considered as such. Because the events the holiday commemorates took place after the time period covered by the Old Testament, its observance is not biblically mandated, explains Jack Wertheimer, a professor of American Jewish history at the Jewish Theological Seminary of America. So it really wasn’t until this cultural desire for a parallel holiday that happened to fall around Christmas time that Hanukkah became widely observed as a kid-friendly celebration, Wertheimer says, and especially so in the United States.

Parents weren’t the only ones who noticed this trend. Companies like Hallmark saw what was happening, too.

The company, which was founded in 1910 as a postcard manufacturer, had quickly gotten into the holiday card game, and its dominance in the greeting-card industry was growing. If Hanukkah could be marketed as a Christmas for Jewish children, it stood to reason that the company would diversify its offerings, branching out into Hanukkah cards and party goods too. Those products were easily visible to American shoppers in the supermarkets where the items were sold.

“I think that that’s part of what made Hanukkah really visible to a lot of people,” Ashton says.

And just as Christmas had colors that made Christmas stuff immediately recognizable, Hanukkah needed them too. But why blue and white?

Though scholars like Ashton point to Hallmark’s role in spreading and popularizing these colors, a representative from the company tells TIME that there is no record definitely confirming how their use of blue and white came about. But, while blue and white decorations are largely an American phenomenon and not part of the holiday’s celebration elsewhere, the most common reason cited for the color choice is an international one: blue and white are the colors of Israel’s flag. The Hallmark representative says that Hallmark’s product teams design their holiday items off the premise that the color scheme has always been connected to that symbolism.

Israel became a state in 1948, which coincides with the post-World War II cultural Hanukkah phenomenon. Ashton notes that the story of Hanukkah — about the Maccabees reclaiming the Temple and Jewish independence — is also often likened to the story of Israel’s independence, making the association that much closer. (But somewhat ironically, she notes, “Hanukkah shrank in importance in Israel” after the nation was established. Israel’s own Independence Day, celebrated on May 8, replaced the wintertime celebration as the holiday most linked to that idea.)

But the association between Judaism and those colors didn’t start in 1948.

Blue and white are also theologically important colors in Judaism. The tallit, or Jewish prayer shawl, is customarily made in a white fabric with black stripes and one blue string, Wertheimer says. This blue fringe comes from the blue snail dye that is mentioned throughout the Torah. The color blue is also mentioned extensively throughout other religious texts, according to Chabad.

Today’s Hanukkah decorations carry on the tradition of the holiday’s early American popularity, in that they look just like Christmas decorations, but they’re blue and white. “Hanukkah bushes” akin to Christmas trees can be found in many Jewish homes; string lights in blue and white rather than green and red are strewn on houses.

“Again, this is participating in the seasonal event that the whole country is doing,” Ashton says, “but with the markers of showing that you’re doing it in a Jewish way.” 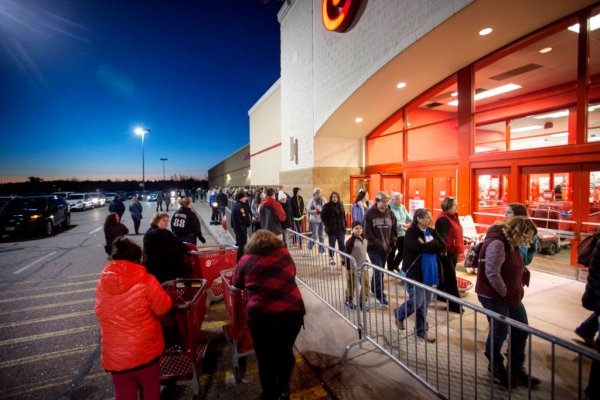 Here Are All the Stores Open and Closed on Thanksgiving 2018
Next Up: Editor's Pick