The Surprising Origins of 5 Hanukkah Traditions

Hanukkah, the eight-day Jewish festival of lights that begins this year on the evening of Tuesday, Dec. 12, commemorates the rededication of the temple in Jerusalem that had been defiled after the Maccabean Revolt, a biblical story that — while it has a few different versions — celebrates the miracle of triumph against overwhelming odds. One part of the miracle, perhaps the part most familiar to today’s celebrants, is the story of how one night’s worth of oil miraculously lasted for eight. That element has inspired many foods eaten to mark Hanukkah, just one of the ways in which the holiday’s traditions have deep origins.

Though the true historical origins of the holiday may be a mystery — there aren’t many reliable sources from that period — it is possible to see how some of Hanukkah’s best-known traditions have evolved over time, particularly as the holiday has taken on more importance in the American Jewish calendar. Here’s a glimpse at what we do know about the holiday’s beloved modern-day rituals:

Though the candles might seem to be the most important part of any Hanukkah observance, the holiday’s original celebrants wouldn’t have used them. Rather, they would have lit oil lamps like the lights in the Hanukkah story. “In the Hebrew Bible, in the Old Testament in several places it speaks of pure-beaten olive oil for the light,” Israeli archaeologist Rafael Frankel told NPR, noting that it also was a common cosmetic and had ritual uses. “Olive oil was the main oil of this region and very little other oil was ever used.”

The tradition of using candles instead dates to 18th century Eastern Europe, when “candles became cleaner and cheaper, and people couldn’t get olive oil in the middle of the winter because it’s expensive,” historian Steven Fine, author of The Menorah: From the Bible to Modern Israel and founding Director of the Yeshiva University Center for Israel Studies, tells TIME. Most menorahs didn’t have branches before that time either, he says, until wealthy Germans started using them, and synagogues followed suit.

Speaking of oil, eating food fried during Hanukkah is considered a symbol of the oil used to light the menorah. Hence, jelly donuts. Known in Hebrew as sufganiyot (the singular is sufganiyah), Hanukkah donuts were the brainchild of the Israeli labor group Histradut in the ’20s, in what was then British-run Palestine. As food history expert Emelyn Rude wrote for TIME, the end of the High Holy Day season in autumn “often brought a lull in work in Jewish quarters. By pushing the sufganiyot as a symbol of the Festival of Lights, as opposed to the DIY-friendly latke, the Histradut could encourage the creation of more jobs for Jewish workers.”

And latkes (fried potato pancakes), probably the best-known example of traditional Hanukkah food, are also a relatively modern part of Hanukkah celebrations, at least as we know them today. The potatoes only became part of the recipe — and a big part of the Eastern European Jewish diet in general — in the mid-19th century, when a lot of potatoes got planted after “a series of crop failures in Ukraine and Poland in 1839 and 1840,” according to Gil Marks’ Encyclopedia of Jewish Food. German immigrants then brought the tradition to America. Potatoes were also a cheaper option than wheat flour and cheese. That’s right: the version of latkes served in the Middle Ages were actually made of cheese, usually from goats or sheep. Which leads us to…

Cheese blintzes or other dairy foods

It’s not a common Hanukkah tradition, but if you end up at a table with dairy foods, it’s probably a reflection of a misinterpretation of the book of Judith, according to Marks. “The text, composed around 115 BCE, tells of [how] Judith, a young widow from a town besieged by the Babylonians, infiltrated the enemy camp, fed the commanding general salty cheese to induce thirst, plied him with wine to slack his thirst until the general fell into a drunken stupor, then cut off his head with his own sword,” he wrote for The Daily Meal. “In response to the loss of their leader, the enemy army panicked and fled.” But, as Marks points out, the story actually takes place about 400 years before the rule of the Syrian-Greek empire that took on the Maccabees. The confusion dates to the Middle Ages, Marks writes, when the written version of the Judith story had been lost and the oral version began to meld with that other story of victory by an underdog Jewish force.

These foil-wrapped chocolate coins you get may have evolved from a bunch of different traditions. One possibility is an 18th-century Eastern European tradition around Hanukkah, in which rabbis went from village to village giving Hebrew School-style lessons. They were rewarded by villagers with some kind of edible tokens of appreciation that may have included whiskey, grain, vegetables or honey, writes Eliezer Segal, author of Holidays, History, and Halakhah, who’s taught Religious Studies at the University of Calgary. He adds that in Yemen, Jewish mothers would give their children a small coin on each day of Hanukkah that they could use to buy sugar powder and red coloring that they’d make into a kid-friendly “Hanukkah wine.”

The exact origins of this spinning top game are also unknown, but it’s thought to have derived from a 16th century game played in Ireland that made its way to Germany. As such, though the four letters on the four sides of the top are now said to stand for the words in the Hebrew sentence “a great miracle happened there” (or, in Israel, “happened here”), that meaning probably showed up later.

“By 1720, the game was called T- totum or teetotum, and by 1801 the four letters already represented four words in English: T = Take all; H = Half; P = Put down; and N = Nothing,” Rabbi David Golinkin, President Emeritus of the Schechter Institute of Jewish Studies, once wrote. “Our Eastern European game of dreidel (including the letters nun, gimmel, hey, shin) is directly based on the German equivalent of the totum game: N = Nichts = nothing; G = Ganz = all; H = Halb = half; and S = Stell ein = put in.” The word “dreidel” comes from Yiddish, but the top itself also had other names, including a “varfl,” meaning “something thrown.” 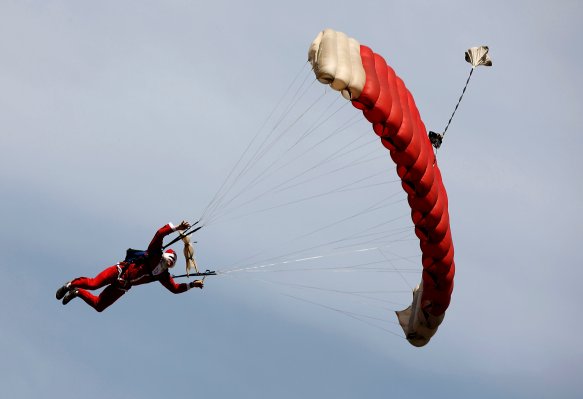 An Ambitious Skydiving Santa Had a Crash Landing
Next Up: Editor's Pick