Hong Kong authorities on Tuesday barred prominent democracy activist Joshua Wong from contesting local elections next month in a move that could reignite unrest in the protest-seized Chinese enclave.

Wong shared a letter notifying him of his disqualification from the Nov. 24 district council race on social media.

“I become the only candidate banned from running in November’s District Council Election,” Wong tweeted.

In a separate statement issued Tuesday, the government says a candidate, who it does not name, was disqualified over comments he made about the semiautonomous city’s right to determine its own future. The authorities say the candidate’s political stance violated Hong Kong’s Basic Law, a mini-constitution that maintains the region is a part of China.

“The candidate cannot possibly comply with the requirements of the relevant electoral laws, since advocating or promoting ‘self-determination’ is contrary to the content of the declaration that the law requires a candidate to make to uphold the Basic Law and pledge allegiance to the HKSAR [Hong Kong Special Administrative Region],” the statement says.

Wong insists the government’s decision to bar him reflects the extent of Beijing’s interference in Hong Kong and deals another blow to the city’s political freedoms.

“It proved how Beijing manipulate [sic] the election with political cersorship and screening,” he tweeted.

Wong has repeatedly stated that he does not support Hong Kong independence, and his disqualification comes even as other democracy campaigners who support the protests have been approved. Yet as one of the most recognizable faces in Hong Kong’s democratic struggle, Wong’s candidacy in the upcoming polls was widely anticipated to be contentious. The 23-year-old former leader of the 2014 Umbrella Movement frequently criticizes Chinese President Xi Jinping and has fashioned himself into a de facto ambassador for the current protest movement as he flies around the world trying to drum up global support. In September, he testified before Congress, urging the U.S. to join Hong Kong’s fight for greater autonomy.

For Beijing, the protests are seen as impinging on the Communist Party’s redline that Hong Kong not be used as a base for foreign interference, or for subverting the regime. Earlier this month, President Xi warned that anyone trying to split China “will end in crushed bodies and shattered bones.”

Wong, who has previously been barred from running in earlier elections, served several stints in jail in the aftermath of the 2014 movement’s failed bid for direct elections of the city’s leader. After his release this June, he immediately joined the latest round of demonstrations, going from the prison yard to addressing the movement’s activists and striking students who are largely leaderless.

Wong and fellow democracy campaigner Agnes Chow were arrested again on charges of organizing, inciting and taking part in an illegal assembly during a siege of police headquarters on June 21. They are both currently out on bail.

While the city’s district council elections typically revolve around local matters, the upcoming polls have taken on a wider significance as they are expected to serve as a litmus test for public support of the ongoing protests. District councils are presently dominated by pro-Beijing parties, but there is a widespread expectation that the establishment will suffer heavy losses in the coming race thanks in part to a surge in registered youth voters.

Public anger in Hong Kong has swelled as the city’s leader has yet to provide a substantive political solution to a crisis that has spiraled for the past five months. Initially set off by a contentious extradition bill, the movement has morphed into a wider ideological battle sustained by freewheeling, liberal Hong Kong’s fears of an encroaching autocratic Chinese government. The weekly clashes between a hardcore knot of demonstrators and police have become increasingly violent, and have weighed heavily on tourism and the city’s economy. The city’s financial secretary announced over the weekend that the region has fallen into a recession. 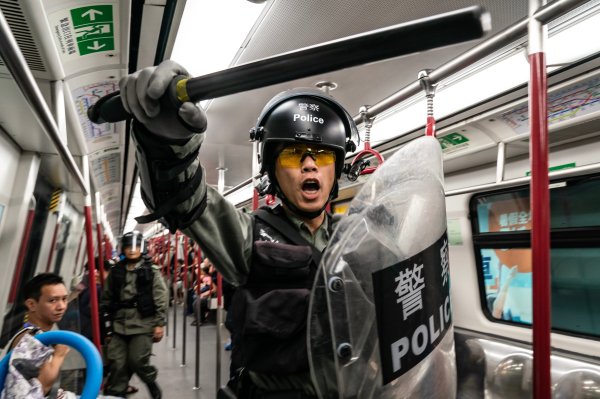