China’s national day was marked in Hong Kong Tuesday with citywide unrest, as pro-democracy protesters fought running battles with police in a stark repudiation of Beijing’s sovereignty over the enclave.

Protesters gathered in at least a dozen districts across the territory, building barricades, setting fires and throwing petrol bombs and rocks at police, who responded with baton charges and tear gas. At one stage, smoke from several fires could be seen above Hong Kong Island’s iconic skyline.

A protester, reportedly a grade 11 student, was shot in the chest in the Tsuen Wan district, north of Kowloon and is said to be in critical condition. In a statement cited by local media, a police spokeswoman said: “The police force really did not want to see anyone being injured, so we feel very sad about this. We warn rioters to stop breaking the law immediately, as we will strictly enforce the law.”

Live warning rounds were also reportedly fired in Kowloon after a group of officers was set upon by a large crowd. Authorities said 51 people had been injured, including two in critical condition and 96 arrested.

Demonstrations began in the early afternoon, when pro-democracy politicians defied a police ban to lead tens of thousands on a march through downtown districts. Marchers chanted the democracy movement’s slogan—”Liberate Hong Kong, revolution of our time!”—and sang “Glory to Hong Kong,” a song that many are calling the enclave’s “national anthem.”

Said Danny Wo, a taxi driver who joined the march: “I wish for Hong Kong independence. I am not Chinese, I am a Hongkonger. Hong Kong is still a colony under this Chinese government.”

Images of Chinese president Xi Jinping were trampled on and defaced en route, and some were burned outside a Chinese army barracks in Kowloon. Many protesters also scattered paper funeral offerings.

As marchers reached the financial district, many splintered off and pushed on to the heavily guarded liaison office of the Chinese government and began erecting barricades in the vicinity. Others occupied Harcourt Road, in the shadow of the legislature and the headquarters of the Hong Kong government, where they threw petrol bombs. Police responded with water cannon and the legislature was evacuated.

Live news streams showed the storefronts of mainland Chinese-owned businesses, and businesses deemed to be sympathetic to Beijing, damaged and vandalized. A least one branch of Starbucks was ransacked (the coffee chain has become a target for protesters after the daughter of the franchise holder condemned the movement). The offices of pro-Beijing legislators, Junius Ho and Priscilla Leung, were also trashed, as was a branch office of the Democratic Alliance for the Betterment and Progress of Hong Kong, a pro-Beijing party.

Police said that “multiple officers and reporters” had been injured by corrosive fluid they say was hurled by protesters. By early evening, police were urging “every member of the public to stay in safe places [and] avoid going outdoors” because “rioters have set fires and committed mass property damage, injuring many people.”

National Day is a festive occasion in mainland China, but a source of tension and resentment in semi-autonomous Hong Kong, where most people, according to surveys, do not define themselves as Chinese but as “Hongkongers.”

Although the raising of the Chinese flag took place without incident at 8:00 a.m. local time, the public were not invited and VIPs attending the ceremony were asked, for security reasons, to gather at the Hong Kong Convention and Exhibition Center to watch the event on closed circuit television.

Much of the city was on lockdown throughout Tuesday, with more than two dozen shopping malls closed, at least 43 subway stations shuttered, and thousands of police on the streets.

Earlier in the day, protesters unveiled a banner reading “Oct. 1 national day of mourning—liberate Hong Kong” from the summit of Lion Rock, a 495-meter hill overlooking the Kowloon peninsula that many in the former British colony regard as symbolic of the city.

Other protesters hung a banner reading “#NotMyNationalDay, Proud to be British since 1841” at the entrance of the British consulate.

Some had traveled from the neighboring Chinese territory of Macau to take part. Connie, a 29-year-old designer said “In Macau, most people support this.”

Her companion Cheng, 28, added: “There’s no chance in Macau to do this, so if something like is happening in Hong Kong, we have to come and support it.”

Jeffrey Wasserstrom, professor of history at the University of California, Irvine and the author of the forthcoming book Vigil: Hong Kong on the Brink, told TIME that the Hong Kong protests were “a thorn in Xi Jinping’s side.”

However, the protests, he explained “implicitly question whether China has really changed all that much since 70 years ago when China was under the control of a dictatorial one-party state that the communists claimed needed to be overthrown for a new China to be born.”

In the run-up to National Day, which this year marks the 70th anniversary of the founding of the People’s Republic, Chinese flags were burned and bunting and banners promoting the Oct. 1 celebrations destroyed by protesters seeking greater freedom for Hong Kong if not self-determination or independence.

Over the weekend, protesters also lobbed petrol bombs at government offices and fought running battles with police, who responded with tear gas, water cannon, and live rounds fired in warning.

Many in the democracy movement hold scant hope of an agreement with Hong Kong’s current Beijing-backed administration.

“If the government humbly listens to Hong Kong people, then we can resolve our political crisis,” democratic lawmaker Lam Cheuk-ting told TIME. “But right now, we cannot be optimistic since the Hong Kong government is so stubborn and arrogant.”

Asked what level of violence was acceptable to bring about concessions, a 23-year-old protester who asked to be identified as Matcha said: “I think there is no line. For me, personally, I would not kill someone. Others might disagree.”

Hong Kong has endured four months of unrest, sparked by a now withdrawn extradition bill that would have allowed rendition of fugitive suspects to China for the first time. The initial protests quickly expanded into a democratic rebellion against the unpopular local government and Beijing itself.

The longtime British possession was retroceded to China in 1997 after 156 years of colonial rule, but its 7.2 million inhabitants remain culturally and linguistically distinct from mainland Chinese—differences that are sharply underscored on National Day.

“Today is the 70th anniversary of the birth of Red China, the birth of the regime that brought so much suffering to the Chinese people,” said a 66-year-old retiree named Alfred, who had come on to the streets. “Today is not a celebration for us in Hong Kong. Today, we are mourning.” 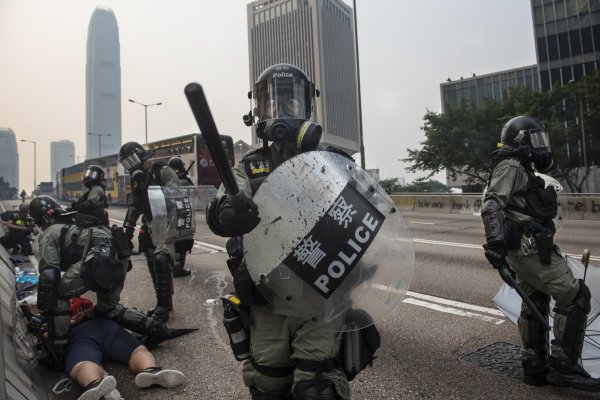 Hong Kong Braced for Unrest on China's National Day
Next Up: Editor's Pick