Activist Joshua Wong is seen outside a court house in Hong Kong on May 16, 2019.
Vernon Yuen—NurPhoto/Getty Images
By Hillary Leung

Hong Kong democracy activist Joshua Wong, one of the student leaders of the 2014 Umbrella Movement, was sent back to prison Thursday after losing an appeal against a contempt of court conviction.

Wong, 22, was sentenced to three months in prison in January 2018 for defying a court order to leave a demonstration site during the 2014 rallies. Wong, then just a 17-year-old student, was at the forefront of the sit-ins that brought major roads in Hong Kong to a standstill for nearly three months as demonstrators called for greater political autonomy in the semi-autonomous Chinese enclave.

After initially being held for six days, Wong was released on bail pending his appeal.

Wong, who had sought to have the conviction overturned, now faces a reduced, two-month sentence to be served immediately, according to court documents.

On Twitter, the activist confirmed that he will be “returning to jail for five additional weeks.”

Wong was previously convicted of unlawful assembly and sentenced to six months in prison on a separate unlawful assembly charge. After spending two months, including his 21st birthday, in a prison cell, Wong was released when an appeals court threw out the sentence.

Over 100 people have been convicted for their involvement in the 2014 protest movement, according to a local activist’s count. Most of the convictions were for non-violent offenses.

Last month, eight Hong Kong activists were handed sentences of up to 16 months for their involvement in organizing the demonstrations, a verdict that some fear reflects a bid to quash dissent after the protests proved a formidable challenge to Beijing’s authority.

Thursday’s sentence also comes amid mounting concerns over a controversial extradition bill that would allow the transfer of fugitives to mainland China to stand trial. The bill, which has incited thousands to take to the street in protest, stokes further fears that the city’s freedoms and legal protections could be compromised by Beijing. 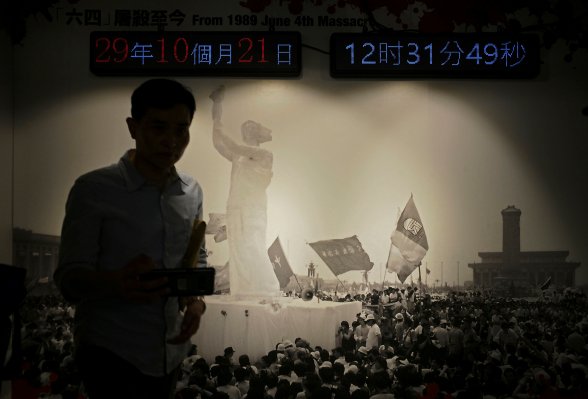 World's Only Tiananmen Massacre Museum Reopens
Next Up: Editor's Pick