This time five years ago, a bespectacled 17-year-old stood atop a podium outside the Hong Kong government headquarters. Holding two microphones in his hand, student activist Joshua Wong addressed thousands of pro-democracy protestors who had taken over all eight lanes of Harcourt Road—a major thoroughfare running through the political district.

His speech, punctured by sporadic bursts of cheers and applause, helped to kick off what became known as the Umbrella Revolution. Named for the everyday item that protestors used to protect themselves against police pepper spray, the protest saw the city’s key districts paralyzed for almost three months. Demonstrators demanded that Hong Kong be able to freely elect its own leader. But while the 79-day street occupation captured world headlines, and got Wong on the cover of TIME, the protesters won no concessions.

Fast forward five years and unrest is again roiling the former British colony, this time sparked by a controversial extradition bill that would have allowed for the transfer of fugitives to mainland China. The bill has since been withdrawn, but the campaign against it has snowballed into a broader democratic rebellion and challenge to Chinese sovereignty.

Wong is just as visible today—in fact, even more so. He is the subject of a Netflix documentary and he has been on overseas tours, drumming up support for Hong Kong’s democracy movement. When the current protests broke out, he was serving jail time for his involvement in the 2014 movement. On the day of his release in June he proceeded immediately to join a rally. Together with members of his political party, Demosisto, he remains at the forefront of Hong Kong’s push for political freedom.

TIME spoke to Wong, now 22, to mark the five-year anniversary of the Umbrella Revolution.

You were the face of the protests five years ago. How would you describe your role today?

I am one of the facilitators, helping to make the voice of Hongkongers heard in the international community. I also organize student class boycotts and provide assistance for high school students.

Did you ever imagine then that Hong Kong would be where it is now?

I didn’t imagine that. I think it’s remarkable that five years ago, the day we ended the movement, we claimed we would be back—and now we are back, with even stronger determination.

The movement today is described as “leaderless”. What is the value of that?

Rather than top-down command towards activists, we have more bottom-up collaboration. The Umbrella Movement can be described as an encyclopedia. Politicians and student leaders wrote it, and let the masses read it and react passively. The movement today is like Wikipedia. It’s faceless and leaderless, but everyone is engaged. Even if you don’t know who who wrote it, who organized different campaigns, everyone recognizes their roles and has self-initiative. It’s optimistic.

How do you think the political climate in Hong Kong has changed?

Some say that the protests today are the “Umbrella Revolution 2.0.” Do you see this as a continuation?

I wouldn’t compare it directly because the dynamics are very different. Five years ago, there were still world leaders sympathetic to the China model. But I think how countries recognize the problem of Beijing is far more now. Who could imagine that after the G7, world leaders would issue a joint statement? That Trump, who always prioritizes business interests, would bring up the Sino-British Joint Declaration during the U.N. General Assembly? We never would have seen this in the past.

You just returned from the U.S., and it was recently announced that the Hong Kong Human Rights and Democracy Act is advancing through Congress. What does this mean for Hong Kong?

We’ve spent more than four years advocating it and finally it is going forward. When I was in the U.S., I spoke with lawmakers including Nancy Pelosi, Jim McGovern and Marco Rubio. Passing this bill at the committee level is the first step. We are optimistic the bill can pass in Congress within this year, which will start a new chapter of U.S.-Hong Kong relations and a new chapter of bipartisan consensus on a tougher approach to Hong Kong’s democratization.

Read more: Then and Now: 79 Days of Protest in Hong Kong

And how were your trips to Taiwan and Germany?

We recognize Taiwan as the beacon of Asian democracy. There, I met with more than 12 legislators to seek bipartisan support. In Germany, I met with the foreign minister and about 10 legislators. Beijing broke the promise [made with the U.K. in the Sino-British Joint Declaration], so we need to go to the international community to seek allies and put pressure on Beijing.

Do you think your meetings with foreign politicians to rally international support will give Beijing more leverage to say there is a “black hand” guiding the protests?

Pro-Beijing officials also meet with [U.S.] consulate generals. On the Hong Kong government website, you can see a group photo with [Hong Kong’s top official] Carrie Lam and Nancy Pelosi. I see no reason to say that only pro-Beijing individuals can meet with foreign leaders.

Would you say the protests today have achieved more than the 79 days of the Umbrella Revolution did?

Yes, we’ve achieved more today. The Umbrella Movement was a legacy, not a victory, because there weren’t any concrete policies or systematic reforms after it. And in this summer of discontent, or however we describe this movement, we have forced President Xi to withdraw the extradition bill. This is the first time for him to be [made] aware that he needs to compromise with the Hong Kong people.

What do you foresee five years down the road?

I can’t predict what will happen five years from now. Half a year ago, if you told anyone a few months later that two million people would take to the streets, no one would believe it. Of course, I can’t say that in five years later Hong Kong will have free elections suddenly, and that [a member of] the pro-democracy camp can be the leader of Hong Kong. But at least freedom from fear is what we hope for. How do we let that dream come true? It depends on our actions, and how we let our actions speak louder than words. 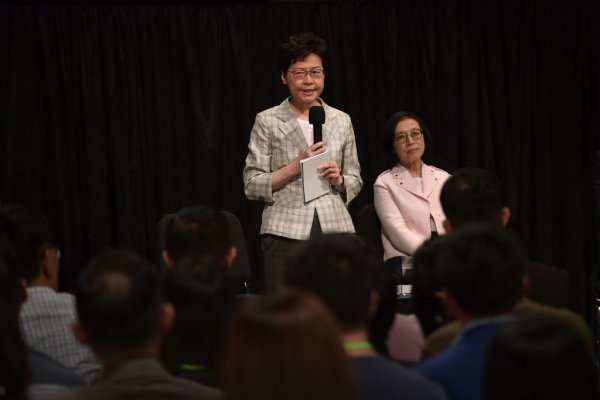