Activists and striking students gathered outside Hong Kong’s Legislative Council on Monday to listen to freed democracy campaigner Joshua Wong on the day he was released from prison—and one day after massive protests forced an abject climb down from the government over highly contentious legislation.

From mid-morning, protesters braved the stormy weather in their push for the withdrawal of a divisive extradition bill and the ouster of the semi-autonomous enclave’s leader, Chief Executive Carrie Lam, whose championing of the bill has proven to be a disastrous miscalculation.

“Just this morning, I left prison,” he told the crowd in Cantonese. “I regret that I was not able to participate in [Sunday’s] protest. But in my prison clothes, I watched it all happen.

“Our demand is that the government totally withdraw the bill, and retract [its depiction of] the demonstrations as a riot, and condemn police violence.”

“On TV, I saw Carrie Lam speaking in an interview. She was crying tears, while Hong Kong protesters are bleeding.”

Huge numbers of Hongkongers brought the city’s downtown areas to a standstill Sunday as they peacefully marched against a legislative amendment that would allow fugitives to be extradited to China for the first time. The government says that the extradition measure is necessary to prevent Hong Kong from becoming a haven for criminals, but many in Hong Kong fear that Beijing will use the provision to come after its political opponents in Hong Kong.

The size of the march prompted an apology from Lam, but her mea culpa has only infuriated protesters, who see it as insincere. They are also dissatisfied by her promise to postpone the bill, demanding that it be dropped altogether.

“We all know two million people showed up on the streets yesterday,” said lawmaker Eddie Chu, quoting the organizers’ unverified estimate of the number of people who marched. “All of us were forced by Carrie lam to come out. This movement is a Hong Kong people’s movement,” he said, speaking just before Wong addressed the gathering.

The crowd included many young but determined protesters.

Paige Law, 14, was sitting outside the legislature revising for a math test tomorrow. “My parents don’t know I’m here right now,” she said.

Nearby was Kristen Cheung, an 18-year-old striking university student. “I want people to know that we are not rioters and that we are not some sort of political tool being manipulated,” she said. “We are just students who want to show we care a lot about Hong Kong and don’t want this law to ruin our future.”

Legislator Au Nok-hin appealed to the youthful crowd to keep protests peaceful. “We want everyone on the scene to promise us something. Don’t bleed, don’t get arrested, don’t get hurt, can you do this? Promise me.”

A large crowd then marched on Lam’s office to demand her resignation. Dissident and former legislator Leung Kwok-hung said “Carrie Lam, are you deaf? Are you blind? Talk to the people, not [Chinese president] Xi Jinping!”

Marchers stood outside Lam’s office at police barriers, and occupied Lung Wo Road, one of Hong Kong Island’s main east-west arteries. They chanted “No withdrawal, no retreat!” Legislator Eddie Chu led chants of “We are the owners of city, we are not slaves!”

Meanwhile Wong pledged to resume the fight for the city’s freedom.

“Now is the time for me to join this fight,” he told reporters. “It’s time for us to urge Carrie Lam to withdraw the extradition law proposal and it is her responsibility to step down”

However, he asked for time to study developments that had taken place while he was in prison.

“I’ve only been out for four hours. I need time to digest the situation. Since leaving jail I haven’t had time to look at news,” he said. 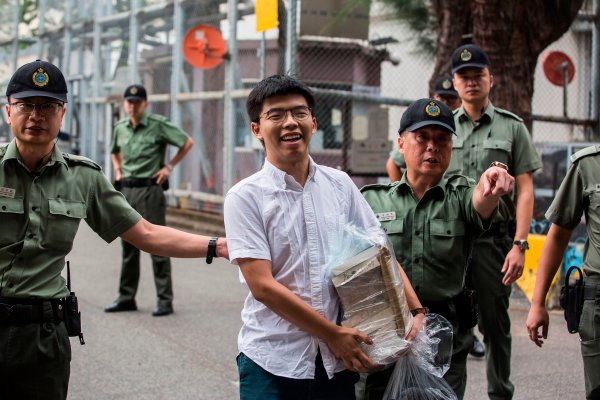 Hong Kong Fights On
Next Up: Editor's Pick