Tens of thousands of anti-communist protesters defied an official ban to march through one of Hong Kong’s prime tourist districts Sunday. But what began as a peaceful demonstration followed the usual pattern and degenerated into violence, arson and destruction.

Marchers originally intended to rally at the West Kowloon high-speed rail terminus—a showpiece transport hub, built at a cost of $10.7 billion, connecting the former British colony to mainland Chinese cities. Some parts of the facility are subject to mainland customs and immigration laws and therefore the terminus is seen as a symbol of Beijing’s presence by many protesters, whose push for greater political freedom has taken on an increasingly anti-China tone over five months of unrest.

But the crowds quickly shifted their targets after the march began. The shuttered shopfronts of mainland Chinese businesses were vandalized as the march made its way up the “Golden Mile” of Nathan Road—the prime tourist strip—passing five-star hotels, including the Peninsula hotel, Hong Kong’s 91-year-old “grande dame.”

Branches of the Bank of China were broken into and ransacked before being set on fire. Government offices were defaced and petrol bombs were hurled over the walls of a police station and into subway stations, forcing the closure of several.

Protesters also erected burning barricades and threw bricks at police, who responded with tear gas, rubber bullets and water cannon, pursuing protesters up Nathan Road, through the Jordan district, and into the blue-collar heartland of central Kowloon.

Many marchers wore masks in contravention of a government ban on facial coverings at public assemblies, meant to deter participation in protests. Others carried Catalonian flags in solidarity with the secessionist movement that has thrown Spain into crisis.

The protesters chanted “Stand with Hong Kong! Fight for Freedom!” and called for full democracy for the enclave’s 7.4 million people, who are presently ruled by a Beijing-backed official selected by a so-called “election committee” of just 1,200 members from mostly business and establishment backgrounds.

Earlier in the afternoon, a group of South Asians in “I Love HK” shirts stood outside Chungking Mansions—an iconic, 1960s commercial building that is home to a shifting population of traders from the subcontinent and sub-Saharan Africa.

Tensions have grown between Hong Kong’s ethnic minorities and protesters, who accuse South Asian gangs of acting as thugs for hire, paid by Triad criminal organizations and other shady groups to intimidate and beat up protesters. Jimmy Sham, convenor of march organizer the Civil and Human Rights Front, was hospitalized after being attacked by a gang of non-Chinese men Wednesday. He sent a message from hospital appealing for racial calm: “Do not label anyone by ethnicity in the movement,” he wrote. “I believe that, everyone who joins this path to democracy are our brothers and sisters, regardless of nationality, language, color and race.”

Many on the march expressed shock and sympathy for Sham. “We came out today because the man was chopped in the street—It really upset me,” said Ching, 33. “I had to come out, especially this time.”

The march comes at the end of a week of tumultuous politics, even by Hong Kong standards. On Wednesday, the enclave’s top official, the increasingly isolated Carrie Lam, was prevented by unruly lawmakers from giving her annual policy address at the Legislative Council, and fled the room to calls for her ouster. On the following day, a question-and-answer session with Lam and legislators degenerated into similarly chaotic scenes.

Hong Kong’s protests began in June as opposition to a detested (and now withdrawn) bill that Lam attempted to fast track. The measure would have made it possible, for the first time, for criminal fugitives to be extradited to mainland China. Fearing that Beijing would use the provision to round up dissidents and critics in the enclave, Hongkongers rose en masse, with millions taking to the streets.

The protests have since become increasingly violent and their aims have broadened to include full democracy, self-determination and even independence for Hong Kong, which has infuriated Beijing. China regards the Hong Kong protests as a color revolution and President Xi Jinping has warned that “Anyone attempting to split China in any part of the country will end in crushed bodies and shattered bones.”

—With reporting by Amy Gunia and Abhishyant Kidangoor / Hong Kong 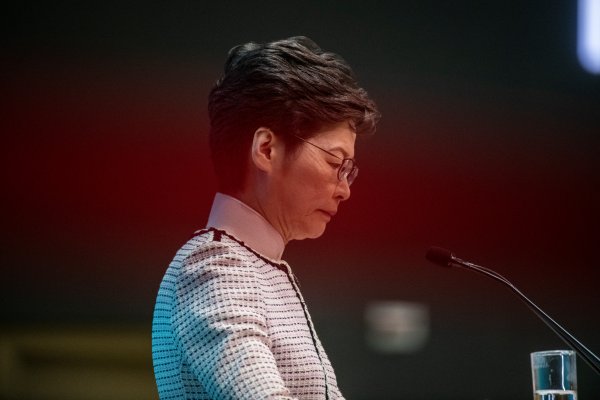 'Is She Scared?' Hong Kong Leader Slammed for Radio No-Show
Next Up: Editor's Pick