Speaking outside the court, Wong said the “political prosecution” will do little to dampen the movement.

“I can only tell Beijing and the Hong Kong governments that the arrests and charges will not pacify the public’s anger. It will only cause us to be firmer in our fight and not give up,” he said.

The 22-year-old Wong was “suddenly pushed into a private car on the street” near a subway station on the southern side of Hong Kong island in the morning, according to a statement from the pro-democracy Demosisto party.

About an hour later, the party said Chow, also 22, was arrested at her home.

A spokesperson for the police confirmed that Wong faces charges of inciting, organizing and participating in an unauthorized assembly in relation to an incident on June 21, when protestors besieged the police headquarters. Chow faces charges of inciting and participating in an unauthorized assembly on the same day.

Wong’s detention comes two weeks before he was due to travel to Washington D.C. to attend a hearing on the Hong Kong Human Rights and Democracy Act.

Wong and Chow’s arrest could be part of a wider crackdown. In the afternoon, a police spokesperson confirmed the arrest of a pro-democracy lawmaker Cheng Chung-tai and a former student union president at the University of Hong Kong, 23-year-old Althea Suen. Local media also reported the arrest of a district counselor, Rick Hui.

On Thursday night, police also detained Andy Chan, the head of a banned pro-independence party, as he attempted to board a flight out of the territory.

The arrests come at a highly sensitive time, with police having banned a large march that was due to take place tomorrow to call for universal suffrage for the former British colony. Hong Kong’s ongoing pro-democracy protests have been ending in street battles of increasing severity in recent weeks, and police gave this as the reason for the ban.

One of the organizers of the march, Bonnie Leung, told local media that the police were “declaring war on all peaceful protesters.” A large turnout is expected in defiance of the police order.

Meanwhile, another organizer of the march, Jimmy Sham, was attacked at a restaurant in central Kowloon yesterday. Local media reported that masked men armed with baseball bats attacked him and a companion as they were eating lunch.

Wong and Chow’s arrests are certain to exacerbate political tensions in the semi-autonomous enclave of 7.2 million, which was retroceded to China in 1997 but remains politically, culturally and linguistically distinct from the rest of the country.

The territory has been rocked by months of protest that were initially sparked by an unpopular extradition bill but have since exploded into a rebellion against its unpopular and unrepresentative government, and even against Chinese sovereignty itself.

The government has not ruled out imposing a state of emergency in a bid to restore order. Beijing has also intensified its rhetoric on the unrest, with the state-run Xinhua news agency labeling the protests a “color revolution” and the local military garrison acquiring new anti-riot vehicles in a highly publicized deployment. 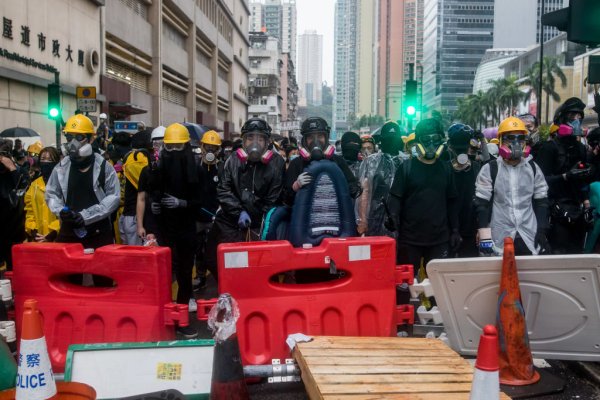 Then and Now: 79 Days of Protest in Hong Kong
Next Up: Editor's Pick