The Best Halloween Party Snack Ideas That Will Haunt Your Friends Forever, According to Pastry Chefs

It’s time to dust off the pumpkin apron and toss on a witch’s hat to throw the most magnificent shindig, with a little help from the best Halloween party snacks your friends have ever seen.

While it may seem like there’s no correct or incorrect way to consume candy and other Halloween treats, the experts have spoken out on the official best practices.

TIME turned to some of today’s most noted voices in the world of sweets to prepare you for serving any and all Halloween party candy and treats. Whether you’re a sweet or sour person, a candy corn hater or lover, a costume-wearer or someone who is open-minded with candy choices, we’ve got you covered.

Here are the best tips from pastry chefs and bakers on what to serve at your spooky festivities.

The most important detail for your Halloween party is unquestionably the chocolate. For your Halloween party, “there has to be chocolate,” says food writer and cupcake cookbook author Allison Robicelli. Anything from a bowl of Snickers or mini Twix bars to M&Ms will work, but Robicelli says her favorite trick-or-treating prize was always a Hershey’s variety pack. “[Halloween] is really the only time of year you can get the Crackle and Mr. Goodbar,” she tells TIME.

And consider adding dark chocolate, which Robicelli says always seemed “sophisticated” to her as a kid. “I really loved the Hershey’s dark chocolate ones, because they felt so fancy and grown-up,” she says.

Candy corn’s worthiness among the Halloween greats is one of America’s most hotly-debated subjects.

Vallery Lomas, a baker who won the third season of The Great American Baking Show, insists it’s high time to forget about the hatred for candy corn, a treat which Deadspin has called horrible and Buzzfeed once said tasted worse than hot dog water. Candy corn is “so festive and symbolic of something so specific,” she tells TIME. At her own Halloween party, it would have to make an appearance. “I would have candy corn, for sure. People might not eat it, but I think it makes you feel nostalgic for simpler times of Halloween.”

As for how the treat could make its way into the menu elsewhere, Lomas has a suggestion. “I feel like maybe a candy corn fudge could be fun,” she says. “I might have to actually do that right now! It could be really fun and festive-looking.”

Leah Chin-Katz, pastry chef at The Manufactory in Los Angeles, known for its fresh pastries, is in the pro-candy-corn camp, too. “You could do some sort of fun popcorn, like a caramel popcorn but throw candy corn in it,” she says, “because it’s even kind of Halloween-colored.”

Peanut butter is on the menu

When trick-or-treating as a child, Lomas loved to get her hands on anything with peanut butter. “I would say the most coveted was definitely the Reese’s pumpkins,” she tells TIME.

Peanut butter and milk chocolate candy holds a special place in Robicelli’s heart, too. “My favorite [candy] is the Reese’s peanut butter cup,” she says. “I eat peanut butter every day.” (I personally was relieved to learn it’s not just me spooning nut butters directly from the jar and into my mouth nightly.)

Don’t forget about those fruity or sour flavors

To balance out some of that chocolate, don’t forget about fruity and sour flavors, too. Robicelli likes to add Japanese Kasugai gummies to her dessert table to offer a fruity, light taste. “With American candy, it’s just kind of hitting in your head like sugar, sugar, sugar,” she says, “and with [most] Asian candy, there’s a lot more flavor with sugar at the background.”

Chin-Katz is also a fan of red vines and Skittles, to add more layers to the plate (or trick-or-treating pail, too).

As Robicelli puts it, “That’s a lot of sugar.” The solution to this inevitable conundrum is simple, though. Include a palate cleanser in your menu. With all those sweet candies, “you need something to eat between, so it doesn’t all melt together,” Robicelli says. “If you just go from candy to candy, they all taste the same.” Her best recommendations are pretzels or Pocky, the Japanese chocolate-covered biscuit.

Chin-Katz has another idea. At her own upcoming Halloween party, her sous-chef is making a spiced apple cider — spiked with rum. “We’re looking forward to that,” she says.

While all the candy in the world may fill the heart and belly with glee, you can focus some energy on actually baking some desserts for your guests, too. “I love that there’s stuff you can get at the store, that’s really accessible,” Lomas says. “But if I wanted to make something really special, I’ve made these little witch’s hats.” To make her creation, Lomas bakes a cookie base — any regular sugar cookie will do — and adds marshmallow piping. For the big finishing touch, she dips it in chocolate to resemble that pointy hat tip. “It’s like somewhere between candy and a cookie,” she says. “Those are fun.”

Chin-Katz also recommends a decorative cookie, like ginger snaps decorated with royal icing to form the shape of a pumpkin.

For even more seasonal flair, Lomas loves making extra-special pumpkin muffins, inspired by a dessert from Thomas Keller’s Bouchon Bakery. “I molded orange fondant around the pumpkin muffins to give them that pumpkin shape, and then I stuck a cinnamon stick on top,” she says.

But no matter what, Lomas recommends staying on theme. “If you serve fun things that really resemble something from the holiday,” Lomas says, “people get a huge kick out of that.” 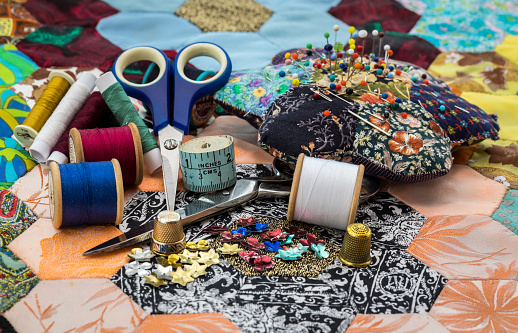 The Quilting Community Really Stepped Up to This Call for Help With a Massive Embroidery Project
Next Up: Editor's Pick