The embattled leader of Hong Kong, Chief Executive Carrie Lam, has formally withdrawn a divisive bill that sparked the worst political crisis the Chinese enclave has seen in decades.

The move satisfies one the protesters’ key demands. But critics say the concession is unlikely to bring an end to intensifying unrest, which has rocked the city for more than 13 consecutive weeks and is now driven by a host of other objections.

“The government will formally withdraw the bill in order to fully allay public concerns,” Lam said in a video address Wednesday evening after a closed-door meeting with pro-government lawmakers.

The contentious legislation would have allowed the extradition of fugitives to mainland China where the murky court system operates under the influence of the Communist Party. Popular backlash to the proposal prompted two million people to march in the streets in June according to organizers’ estimates. In response, Lam declared work on the bill suspended. But her announcement, and later insistence that the bill was “dead,” did little to mollify the angry crowds, as many feared the measure could be revived at a later date.

Since the protests kicked off, the full withdrawal of the bill has been one of the central objectives. But the movement has swelled to encompass a growing list of demands, including an independent inquiry into perceived police brutality and direct elections for the city’s leaders.

Replying to the public’s “five demands,” Lam continued to insist her administration has “in fact responded.”

“I recognize that these may not be able to address all the grievances of people in society,” she said, before presenting “four actions” that she hoped will initiate a dialogue with the public, including agreeing to the formal withdrawal of the bill.

She also announced two additional members for the existing police review mechanism, but stopped short of agreeing to calls for an independent inquiry. The escalating use of force, frequent salvos of tear gas in residential neighborhoods and mass arrests—announced at 1,183 Wednesday—have contributed to hardening resentments against a police force that previously enjoyed widespread public trust.

Lam has steadfastly defended the police, and resisted calls for independent accountability measures.

Democratic legislator Claudia Mo agreed that Lam needed to go further if she is to placate the protesters.

“She has created such havoc, a word she’s used herself, and the damage is done,” Mo tells TIME. “I think the protestors will just carry on with their quest for democracy and human rights.”

Natalia Lee, a 24-year-old protester, says she doesn’t think the Chief Executive’s announcement will have much impact at this point.

“Too much has happened for the withdrawal of the bill to work as a solution. Only all five demands would appease the people,” she says.

In at least one neighborhood, residents took to their rooftops after Lam’s televised announcement and began a collective chorus of “freedom for Hong Kong!” LIHKG, a reddit-like forum used by the protesters, buzzed with calls to reject any compromise.

The demonstrations, which have increasingly turned violent with protesters at various times ransacking the legislature, shutting down the city’s airport, besieging police headquarters and turning Hong Kong’s normally bustling retail and entertainment districts into battle fields, have snowballed far beyond the extradition bill. The rebellion against Lam’s administration has become an all-out push for greater democracy, with many demanding self-determination or even independence from Beijing.

“This is our final chance to win democracy and liberty so we can’t step down now and we must march on,” Ventus Lau, 25, who has organized a number of marches and rallies since June, tells TIME.

Hong Kong returned to Beijing’s control in 1997 under a “one country, two systems” framework that grants the city semi-autonomy and protects civil liberties that are not exercised on the mainland, like the freedom to protest. Fears over Beijing’s tightening hold on the former British colony have periodically spilled into protests, but the current, unrelenting summer of dissent has polarized the city and taken a toll on its reputation as Asia’s international financial hub.

Experts worry that travelers will now avoid Hong Kong, and businesses say the disruptions have prompted them to consider relocating.

“We should all think deeply whether escalating violence and disturbances is the answer,” she said.

Samson Yuen, assistant professor of political science at Hong Kong’s Lingnan University, tells TIME that the bill’s withdrawal “will take some steam, some violence off the streets, but it won’t take people off the streets. In the medium term, protests will still continue, mainly because the protesters’ focus has broadened.” 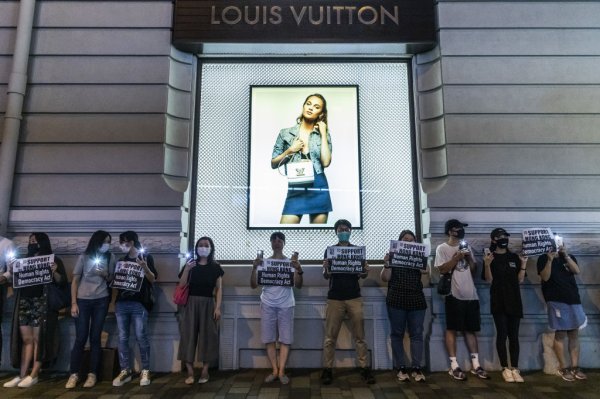 Hong Kong Businesses Are Reeling Amid the Protests
Next Up: Editor's Pick