Hong Kong’s leader Carrie Lam announced Saturday her government will suspend a controversial bill allowing criminal suspects to be extradited to China, after massive street protests that gripped the city this week descended into violence.

Lam has faced unprecedented pressure to scrap the legislation, which its critics say could become a backdoor for China to round up political and commercial adversaries. An estimated one million people joined what is believed to have been the city’s largest ever protest on June 9, and a second round of demonstrations ended violently on Wednesday.

“After repeated internal deliberations over the last two days I now announce that the government has decided to suspend the legislative amendment exercise,” Lam said at a press conference, adding that the central government in Beijing supported the decision to take more time for discussion.

Read more: Hong Kong Is on the Frontlines of a Global Battle For Freedom

Reiterating her position that the legislation is necessary to prevent Hong Kong from becoming a “haven” for criminals, Lam told reporters the government had not provided adequate explanation to the public. The bill, she maintained, was designed to bring justice in the case of a Hong Kong man accused of murdering his pregnant girlfriend in Taiwan in February 2018.

“The original urgency to pass the bill this legislative year is perhaps no longer there,” Lam said, a reference to statements from Taiwanese officials that it would not seek the suspect’s return under the proposed legislation. She added that a majority of lawmakers support the bill and it would not be completely withdrawn, as the protesters demand.

“As there are still loopholes in our [extradition] mechanism we are not in a position to retract this bill,” Lam said, as that would suggest that the legislation was not justified. Suspending the bill came as an abrupt about-face after Lam’s attempt to fast-track the legislation earlier this week. She said there is no timeframe for reopening debate on the matter.

Protesters run after police fired tear gas during a rally against a controversial extradition law proposal outside the government headquarters in Hong Kong on June 12, 2019.
Philip Fong—AFP/Getty Images

Lam said she “felt heartbroken” by the violence, adding that “this is a time for a responsible government… to restore as quickly as possible the calmness of society.”

Authorities said 81 people were injured, 22 of them law enforcement officials, in the worst unrest the city has seen in decades. Police labeled the protest a “riot,” and said they fired 150 canisters of tear gas, “several rounds” of rubber bullets, and about 20 beanbag shots.

The Civil Human Rights Front (CHRF), the pro-democracy coalition that organized the protests, said another march scheduled for Sunday will proceed as planned. The group said in a statement that the purpose of the demonstration is to condemn the use of force by police brandishing “lethal weapons.”

The group is also demanding that police withdraw their characterization of the protest as a riot, and release participants who were arrested, without charge. Demonstrators have further called for Lam to both fully retract the bill and step down as the city’s Chief Executive.

“Tomorrow’s protest sends a very important message: It tells Carrie Lam that we do not accept her response today,” Jimmy Sham, the convenor of CHRF, told reporters after the government’s press conference. “We tell the 1.03 million who took to the streets on Sunday, we hope you all take another step, and encourage another person to come down too.”

A hospital employee in his early 30s, who identified himself only as N., said suspending the bill was “better than nothing,” but was not a sufficient response. “I’m still planning to come out tomorrow because Carrie Lam hasn’t withdrawn the bill,” he said. “It’s just been put on pause, and that’s not good enough.”

Read more: Hong Kong Was My Refuge, Now Its Freedom Is at Stake

Lam’s reversal follows intense pressure across broad sectors of society, as well as the international community, over concerns that the city’s democratic freedoms are eroding as an increasingly assertive Beijing seeks to exert greater influence. The former British colony was returned to China in 1997 under an agreement called “one country, two systems” that guaranteed its autonomy for 50 years, but many say Beijing is steadily chipping away at its freedoms.

The controversy over the extradition proposal has become the latest point of tension between the U.S. and Beijing. On Thursday, members of Congress reintroduced legislation supporting democracy and human rights in Hong Kong. The bill would require an annual assessment of the territory’s political autonomy to determine whether it still qualifies for special trade status with the U.S.

Beijing has rebuffed the U.S., saying it would not accept what it has labeled as foreign interference in Hong Kong’s affairs, and the Chinese government has summoned a U.S. envoy in Beijing over the matter.

Write to Amy Gunia at amy.gunia@time.com, Hillary Leung at hillary.leung@time.com and Laignee Barron at Laignee.Barron@time.com. 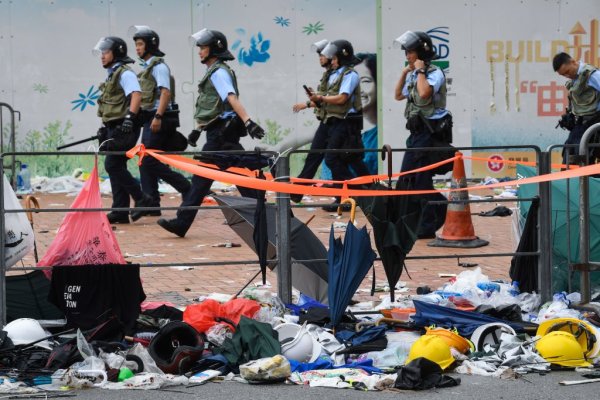