'The Bill Is Dead.' Hong Kong's Leader Vows to Kill a Controversial Extradition Plan After Weeks of Protest

Bowing to public pressure after weeks of protests, Hong Kong’s leader Carrie Lam said Tuesday the extradition bill that kicked off a spiraling political crisis “is dead,” but it remains unclear if she will formally withdraw the legislation.

Lam said the government’s work on the bill, which would have allowed extraditions to mainland China, was “a total failure.”

“I have immediately put a stop to the amendment,” she said at a press conference. But she refrained from calling it “cancelled” as protesters have repeatedly demanded, and did not invoke legislative procedures to officially terminate the bill.

Lam acknowledged “there are still lingering doubts as to the government’s sincerity” over fully scrapping the bill and not resuming it at a later date. “I reiterate here there is no such plan. The bill is dead,” she said.

The extradition bill, which detractors say would have destroyed the firewall between semi-autonomous Hong Kong and its sovereign power China, has ignited massive peaceful marches and separate, smaller clashes between protesters and police. Initially, Lam’s administration advertised the bill as a way to prevent the city from becoming a haven for criminal fugitives. But many in the former British colony saw it as pretext for Beijing to erode the freedoms and rights that distinguish the enclave from the mainland.

The sustained month of unrest has since snowballed into a broader rebellion against Beijing’s control, and demands now include greater democracy and self-determination, as well as the release of jailed protesters, an investigation into the police use of force and Lam to step down.

Last month, after organizers estimated two million people thronged to the streets, an embattled Lam suspended the controversial bill and later apologized. These moves did little to pacify public anger, and were greeted as public relations maneuvers.

“Carrie Lam saying ‘the Bill is dead’ is another ridiculous lie,” activist Joshua Wong tweeted. “The bill still exists in the ‘legislative programme’ until July next year,” he added, meaning it can be resurrected if the Beijing-backed leader so chooses.

Jimmy Sham, convener of the Civil Human Rights Front, a pro-democracy coalition that has organized some of the peaceful marches, was also unimpressed by Lam’s latest remarks. “Does Carrie Lam think that if she repeats the same thing over and over again, we will somehow find it less unbearable?” he said. “Her stance has not changed. She still thinks a suspension is equal to a withdrawal.”

Responding to the demands that she resign, Lam once again demurred. Stepping away from her duties as Chief Executive, as the city’s top position is called, is “not a straightforward thing,” she said. “I have a passion and responsibility to serve Hong Kong,” she added.

Lam’s address Tuesday is unlikely to defuse the crisis gripping Hong Kong. Calls for further action on July 14 have been circulating on the message boards and an app used by the leaderless demonstrators, while another march is slated to take place on July 28.

In the most recent protest Sunday, tens of thousands of marchers symbolically took their grievances to Beijing’s doorstep by trekking to a high-speed train that links the territory to the mainland. Chanting, “Free Hong Kong!” the marchers snaked through a mega-mall shopping district frequented by mainland tourists, and tried to explain their cause to the Chinese visitors.

In an unprecedented escalation, protesters broke into the government complex on July 1, the 22nd anniversary of Hong Kong’s handover to China. While hundreds of thousands of protesters staged a separate, annual march, the event was overshadowed when a more radical group smashed their way through the legislative council’s fortified glass and vandalized the building.

Beijing’s state media condemned the act as “a disgrace” and a wave of arrests followed. 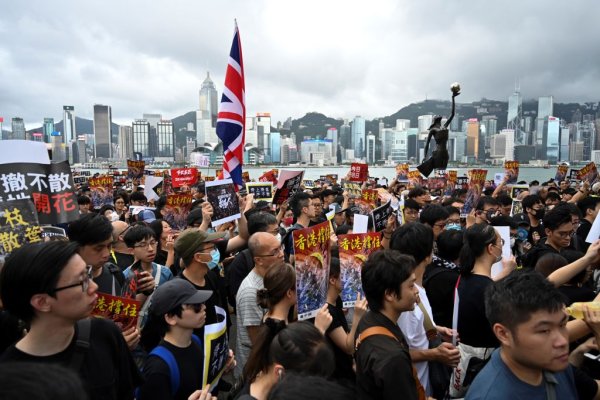