Standing at the top of a staircase, a young man addresses a couple of thousand anti-government demonstrators.

“Our protest today is peaceful and elegant, right?” he asks. His voice reverberates across the park where the protesters are gathered and prompts a resounding chorus of agreement: “We are the most elegant protestors in the world!”

The street protests that have rocked Hong Kong in recent weeks have been mostly leaderless. Protestors don masks and use online aliases to conceal their identities. They organize themselves via the encrypted messaging app Telegram and exchange information via mass Airdrops. But Ventus Lau is slowly rising from the sea of black-shirted anonymity.

The 25-year-old is quick to disavow any sort of leadership role — “I just see myself as a coordinator,” he tells TIME. He emphasizes that he is no different to other protesters, who are united by their youth and opposition to what they see as China’s encroachment on the former British colony’s political freedoms. But he has organized two major rallies and thanks to television, he’s becoming a recognizable face.

Lau was born in Hong Kong to working class parents and raised in a public housing project. The furthest he traveled during his childhood was by train to the southern Chinese city of Guilin, a little over 500 kilometers away; he didn’t set foot on a plane until he turned 18. Culturally, he was raised on a diet of movies and pop music in Cantonese — the language spoken in Hong Kong, which is mutually incomprehensible with the Mandarin spoken in mainland China. In short, his youth was typical of Hongkongers of his age and background.

Read more: ‘We Are Risking Everything.’ Hong Kong’s Young Rebels Stake Everything on Their Struggle

So is his mistrust of Beijing, which developed early. He recalls taking part in protests while still in high school — against a high-speed rail link connecting the enclave with the rest of China. Proponents of the link argued that it was beneficial to the local economy to put Beijing within nine hours of Hong Kong via bullet train. Detractors, on the other hand, saw the project as tying semi-autonomous Hong Kong too closely to China and argued that the $10.8 billion spent building the link would have been better spent locally.

“I discovered then that the Hong Kong political system is an unjust system,” he says. “There are representatives [of the elite in the legislature] who oppose all the good suggestions from the public. It’s necessary to change our political system, otherwise Hong Kong people will never be the owners of this city.”

Lau’s political sensibilities were honed in university, where he read Chinese literature and headed up a so-called “localist” organization, dedicated to the promotion of greater autonomy for Hong Kong. But it wasn’t long before politics became more important than his studies. He dropped out to become an assistant to local councilors, organizing events, drafting letters to government departments, and fielding queries from residents. He also became the convenor of a grassroots community organization. Lau took to the work — so much so that he ran for a seat in Hong Kong’s legislature in 2018, hoping to replace the ousted candidate of a localist party.

The outcome of his candidacy was a political reality check. Amonth into the campaign, he was disqualified on the grounds that he had previously showed support for an independent Hong Kong on his Facebook page. Authorities said his separatist views counter to Hong Kong’s Basic Law, the mini constitution that has governed the territory since it was retroceded to China in 1997.

Dejected, Lau moved back home to live with his parents, who told him it was “time he found a real job.” He got work as a freelance debate tutor to high school students, training the next generation in the rhetorical skills they would need to navigate an increasingly politicized and polarized society.

“As a debate tutor, you encourage students to contribute their own strengths to the team,” he says, adding that when the current round of Hong Kong protests began in June, he brought exactly these skills to coordinating demonstrators, among them skilled designers, translators and lawyers who volunteered their time for the movement.

‘Young people have a feeling of hopelessness’

The government’s attempt, earlier this year, to introduce a bill that would have allowed extradition to China for the first time sparked massive demonstrations — and Lau’s return to politics after a brief hiatus. Like many in Hong Kong, he feared that the bill would be used by Beijing to apprehend not fugitive criminals but dissidents and political opponents. He took to the streets and was in his element.

When several large scale demonstrations failed to persuade the government to formally withdraw the bill — organizers claim that as many as two million people participated in a march on June 16 — Lau took it upon himself to organize different kinds of protests to keep the momentum going. The first was a march on the consulates of G20 nations in Hong Kong, ahead of the G20 summit on Osaka in June. At each consulate, protesters handed over a letter soliciting foreign support in their push for greater freedoms. The second, on July 7, was a march through a shopping district popular with visitors from mainland China, when he addressed a crowd that numbered in the tens of thousands. The idea behind the march was to make the tourists aware of Hong Kong’s plight — the first time that protesters had tried to reach out to their mainland compatriots.

Lau hoped to mobilize higher participation through this different approach. Protesters, he says, “might think, ‘Oh, this is something we haven’t tried before, so I should come out this time because maybe it will work.'”

Over the past month, Hong Kong’s protests have evolved beyond the issue of extradition into demands for wider political reform. Echoing the core demand of the the 2014 pro-democracy push known as the Umbrella Revolution, demonstrators are demanding for the city’s top official to be elected by universal suffrage instead of the present electoral college of mostly pro-Beijing figures. Some demonstrators are calling for self-determination for Hong Kong — even independence.

Wong Yiu Ching, an adjunct professor at Lingnan University, says Lau’s generation of activists has a “natural sense of justice” and has come to the “conclusion that China is a totalitarian regime, compared with Hong Kong which is at least a partial democracy.”

Antony Dapiran, a Hong Kong-based lawyer and author of City of Protest: A Recent History of Dissent in Hong Kong, believes the protests are emblematic of people’s deep-seated frustrations at their political system. “The underlying issue in the city is the lack of democracy. Until that’s addressed, this cycle of protests will continue,” he says.

Read more: How Hong Kong’s Fight for Freedom Is a Global Battle

Others point out that discontent will persist so long as economic opportunities remain limited for many of Hong Kong’s people. The city consistently tops lists of the world’s most expensive places to live in. Soaring property prices, alongside stagnant salaries, mean that young people cannot avail themselves of what previous generations considered a birthright: the chance to buy a small flat, flip it, and move up the social ladder.

“Young people have a feeling of hopelessness about the city and the future,” Ip Iam-chong, an assistant professor at Lingnan University, says. “It’s much harder now to achieve upward social mobility, to own an apartment or to have a middle class way of life than before.”

Lau currently spends a lot of time at his girlfriend’s tiny, 250 sq. ft. home, which costs about $1,700 a month to rent in the gentrifying neighborhood of Prince Edward. They plan to move into a bigger place together, “but first, we’d need money,” he says. On the way, he passes dozens of street food stalls and hawkers touting everything from handbags to smartphone accessories, and takes a couple of wrong turns before confessing he’s not good with directions. “I can say that of my life, too” he says with a rueful chuckle.

When it comes to politics, however, he is anything but directionless, knowing exactly how best to mobilize protestors and organize a march with an attendance in the hundreds of thousands. But these days, he’s taking a back seat; over a lunch of leftover noodles in his girlfriend’s apartment, he ceaselessly trawls messages from protesters in a Telegram group chat to keep up to date with the movement’s latest developments, while Kiwi, his favorite cat of the seven that his girlfriend owns, purrs at his feet.

TIME joins him for the rally in Sheung Shui — a northern town that localists say has been overrun by mainland Chinese traders and needs to be “reclaimed” for Hongkongers. Plenty of people recognize him. University friends come up to chat, as do his political contacts and his high school English teacher. “I’ve seen you on TV!” she says, before offering words of encouragement.

Then, a local reporter grabs him for an interview. Lau is his usual modest self and after offering some thoughts on what the next steps of the movement might be, falls right back in line with the crowd with evident relief. He would rather be just another face in a sea of protestors.

“The power of the collective will always be stronger than of one person,” Lau says. “That’s what we all believe.”

And that may be true. But sometimes one person can help the collective realize just how powerful it can be. 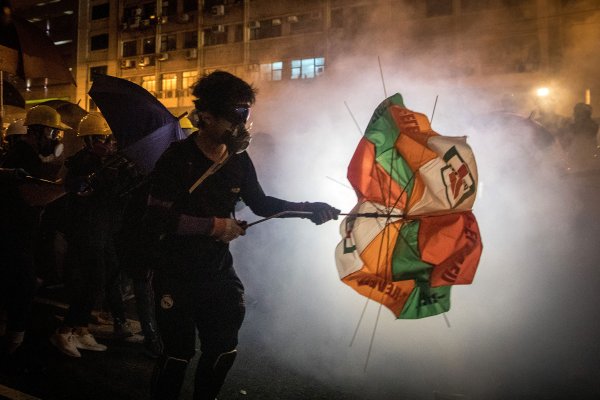 A Violent Turn in Hong Kong Protests Marks a Dangerous New Phase
Next Up: Editor's Pick