While hundreds of thousands of peaceful protesters, including families toting young children, marched through the sweltering Hong Kong afternoon on Monday to express their opposition to a divisive extradition bill, a separate group took more forceful swings against the government

On the 22nd anniversary of the territory’s retrocession to China, hundreds of mostly young radicals used metal poles, hammers, garbage bins and carts to smash through the legislature’s glass façade and eventually invade the complex.

The spray-painting of slogans like “Hong Kong is not China” around the walls shattered any lingering illusions over the nature of their rebellion: This was a clear repudiation of China’s sovereignty over the enclave. Beijing, hypersensitive to any threat to its territorial integrity, will bristle at the unprecedented provocation from this former British colony.

The smell of tear gas from the police’s midnight eviction of the protesters had barely dispersed before the full-throated condemnation began. China’s state media Tuesday pledged “zero tolerance” for the “open and symbolic attack.”

“A zero-tolerance policy is the only remedy for such destructive behavior witnessed. Otherwise, and without this policy, it would be similar to opening a Pandora’s Box, upending social disorder,” the Global Times said in an editorial Tuesday.

Beijing has frequently suggested that foreign forces are behind Hong Kong’s democracy movement. According to AP, Foreign Ministry spokesman Geng Shuang warned that other nations “must not support any violent criminals in any form, and not send any misleading signals or take any erroneous actions.”

The political crisis engulfing Hong Kong and propelling millions of protesters to the streets kicked off earlier this year over a now-suspended bill to allow extradition to mainland China. The city’s Beijing-backed leader, Chief Executive Carrie Lam, insists the legislation would stop the enclave from becoming a criminal haven, while detractors fear it will infringe on the city’s independent judiciary and allow open season on the Communist Party’s political opponents. But the protests have quickly snowballed into a broader fight for greater autonomy, at the very least, if not self-determination.

During their three hour occupation of the Legislative Council (known locally as LegCo) Monday night, protesters moved swiftly to desecrate emblems of post-colonial Hong Kong—defacing portraits of the city’s political leaders, and spray-painting over the city’s official seal—before draping the colonial flag over the dais.

In a highly symbolic act, a protester tore up a copy of Hong Kong’s post-colonial constitution and scattered the pages. According to messages circulating on the encrypted app young activists use to communicate, some protesters were ready to die for the cause.

“We understand the risk of being here,” a 25-year-old protester, who gave his name as Alan, told TIME from inside the legislative chamber.

He insisted that the protesters were driven to this point by their lack of recourse and the silence from the government even after huge numbers of Hongkongers thronged to peaceful marches last month. “The Communist Party revoked our rights and freedoms and tried to deny us democracy,” he said. “At least now we can tell the globe.”

His comments reflect a deep disillusionment that has settled over the city’s youth in the five years since they last took to the streets en masse. In a 2014 fight for the right to directly elect the city’s leader, they paralyzed the financial district for 79 days. But the so-called Umbrella Revolution failed to extract concessions from Beijing, and further alienated Hongkongers from their political masters.

Democratic Party lawmaker Lam Cheuk-ting said that after the storming of LegCo, “the Beijing government will try to tighten their control of Hong Kong and put even more pressure to silence the opposition forces. It will be an uphill battle for the democratic camp.”

In a show of just how deeply the fault lines are drawn, only 11% of respondents identified themselves as “Chinese” in a survey conducted by Hong Kong University just ahead of the July 1 handover anniversary. The majority defined themselves as “Hongkongers.”

‘A gift to the government’

Some argue that the more brazen protesters will jeopardize the goodwill built up through peaceful mobilizations.

“What [happened] in LegCo is mob rule, not legitimate political expression,” said Steve Vickers, CEO of political and corporate risk consultancy Steve Vickers and Associates, and the former head of the Hong Kong police Criminal Intelligence Bureau under the British. “The flying of the colonial flag inside LegCo is stupid and ignorant and deliberately calculated to inflame the central government and its supporters to provoke some form of intervention.”

Meanwhile, Antony Dapiran, a lawyer and author of City of Protest: A Recent History of Dissent in Hong Kong, said that the widening split between peaceful and radical factions of the protest movement was “a gift” to the government. “The government will take full advantage of this to drive a wedge between different elements of the protests.”

Aware of this possibility, protesters have been expressing political if not tactical unity. “I can’t really blame them,” says Ho Yi, a 57-year-old grandmother who took part in the anti-government march on Monday. “The youth are being forced to do things like that because the government doesn’t listen.”

Democratic Party lawmaker Roy Kwong said “When I was there yesterday, I told the protestors that there will be major consequences to their actions, including arrest. They said, ‘Yes, we know that, let us handle it.’ It seems that in this city, we need the young people to come out and protect us.”

Even at the front line, there is give and take. As the protesters smashed their make-shift battering rams into LegCo, many in the crowd admitted to reservations about the tactic. “These people are willing to sacrifice themselves because they feel hopeless about this government,” Kelvin, 20, said as masked protesters hacked at a reinforced glass door less than 15 feet away. He didn’t agree with what they were doing, but he added: “Their courage deserves the utmost respect.”

Courage will be what protesters will need most if they are to continue provoking Beijing. A representative of China’s Hong Kong and Macao Affairs Office condemned on Tuesday the storming of LegCo and pledged Beijing’s support to hold the “extreme radicals” criminally accountable.

“This kind of seriously illegal action,” the representative said in a statement, “tramples the rule of law in Hong Kong, destroys the order of Hong Kong society and damages Hong Kong’s fundamental rights.”

Vickers raised the dark possibility that if local law enforcement could not keep order on the streets, Beijing might. “If the police don’t move in a much more determined manner,” he told TIME, “then matters may eventually be taken out of their hands.”

The enclave’s police force is not alone in feeling the pressure. Jean-Pierre Cabestan, a government professor at Hong Kong Baptist University, and the author of China Tomorrow: Democracy or Dictatorship?, says Beijing’s next move will be to “instruct Carry Lam to adopt a zero tolerance policy, or else … she will be sacked.” 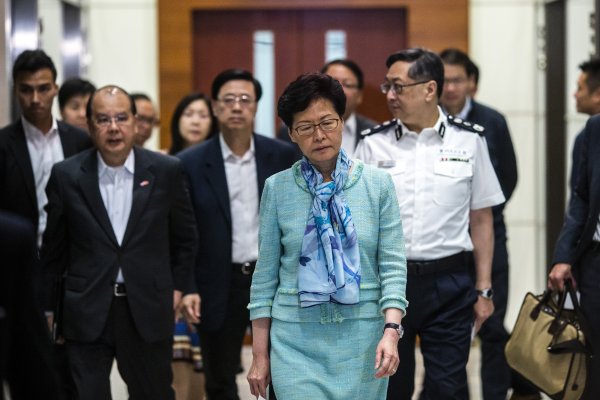