Twice in as many weeks protesters have thronged to Hong Kong’s streets in unprecedented numbers to demand the government withdraw a proposal that would allow extraditions to mainland China. Both times, Hong Kong’s top official refused to scrap the widely unpopular legislation.

The protests, sit-ins and marches convulsing Asia’s financial capital over the past week have forced Chief Executive Carrie Lam to backpedal, but her apology and decision to indefinitely suspend the bill have done little to mollify detractors. The protesters want nothing short of her resignation and a full cancellation of the proposed legislation.

One week after an estimated 1.03 million people joined a June 9 march, defiant protesters crammed back into the streets in even larger numbers for another repudiation of Lam, as well as to decry the police’s use of tear gas and rubber bullets just days prior. Organizers said nearly two million of the city’s seven million residents took part in the march, even after Lam had announced the bill’s suspension the previous day.

The government insists the extradition measure will prevent Hong Kong from becoming a haven for criminals. But critics fear Beijing will use the provision to apprehend its many political opponents in this freewheeling and semi-autonomous enclave.

The snowballing crisis has exposed a deep-seated rift between the former British colony and its sovereign power China. For the second time in five years, young, angry protesters are out on the streets pushing back against perceived meddling from Beijing, and fighting to sustain the freedoms that distinguish this territory from the mainland. As they see it, the autonomy of China’s freest city is at stake.

Here’s why they are unwilling to backdown without a full cancellation of the extradition proposal.

What is the extradition bill?

The proposed bill would amend two existing laws and allow Hong Kong to transfer suspects to countries that it currently lacks a formal extradition agreement with. Crucially, one of those jurisdictions would be mainland China.

The update to the Fugitive Offenders Ordinance and the Mutual Legal Assistance in Criminal Matters Ordinance was proposed in February ostensibly to prosecute a Hong Konger for the murder of his pregnant girlfriend in Taiwan. But Taiwan has sharply criticized the bill, and says it won’t sign any deal that would entangle Hong Kong with China’s opaque legal system.

Under the proposal, 37 crimes would be eligible for extradition on a case-by-case basis. Each arrest warrant would need a green light from Hong Kong’s Chief Executive, who is elected by a small college of predominantly pro-Beijing voters from a list of candidates preapproved by Beijing.

Why are people concerned?

Opponents worry that if the bill passes, anyone who irks Beijing could be targeted and potentially sent to the mainland, including dissidents.

Though the bill excludes political crimes, critics point out that China frequently charges dissidents, including religious leaders and human rights activists, with criminal offenses like “running an illegal business” and “picking quarrels.”

If the bill becomes law, foreign residents and even visitors transiting through the regional hub could also be detained and sent to the mainland, a move that will potentially spook investors and send tycoons packing.

Amid concern over the Communist Party’s creeping encroachment on Hong Kong, the extradition bill is seen as a final blow to the former city’s autonomy, which was guaranteed for 50 years at the 1997 handover to China. If the law passes, critics warn it will end the city’s independent judiciary, and open the floodgates to China’s restrictive political system.

The proposal comes amid a broader tightening of controls across China under President Xi Jinping, who came to power in 2012 and whose tenure has been marked by rising nationalism and intolerance of dissent. Its failure to pass in Hong Kong marks a rare defeat for the China’s strongman.

Read More: Hong Kong Is on the Frontlines of a Global Battle For Freedom

Opposition to the law spans socioeconomic and ideological divides, unifying even groups and organizations that do not typically participate in the city’s political sparring.

While the large-scale street occupations this week have recalled the the 2014 pro-democracy demonstrations, hostility toward the extradition proposal has galvanized an even wider segment of Hong Kong society. Business associations, housewives, lawyers, church leaders, trade unions and even horse racing columnists have all vocally opposed the bill.

Many city residents, even if not protesting themselves, have demonstrated support by restocking supply stations dotting the city and handing out “democracy hot dogs.” As the mostly young demonstrators were pushed back by charging columns of riot police Wednesday, dozens of motorists came to their aid, parking cars, buses and delivery vans in the middle of central boulevards to halt traffic and help prolong the street occupation.

More than 100 businesses even declared a rare strike last week “to defend freedom.”

Facing mounting pressure and heated street protests, Hong Kong leader Carrie Lam said Saturday she was halting work on the extradition bill with no timeline for resurrecting it. Rather than appeasing protesters, her sudden backtracking and refusal to fully withdraw the bill drove the largest demonstration in the city’s history—indeed one of the largest demonstrations seen anywhere in modern times.

After pro-democracy lawmakers led a march on her office Monday calling for her to “talk to the people instead of [Chinese President] Xi Jinping,” Lam offered a rare public apology. Protesters derided her contrition as insincere, and vowed to fight on.

Lam has steadfastly denied receiving “any instruction or mandate from Beijing” on the bill, but Chinese officials have spoken out in support of the legislation, and the foreign minister even offered a full-throated endorsement of the embattled Hong Kong leader Monday. Beijing’s flag-waving state media has blamed “foreign forces” for stoking the uprising to undermine China.

The bill is suspended, so why aren’t the protests over?

As long as the bill is suspended and not canceled, protesters fear the approval process could resume. If the bill were put to a vote, it would almost certainly pass as the legislature is controlled by pro-Beijing lawmakers.

The protesters were “obviously having a big impact,” President Donald Trump told TIME, adding “I think that they’ve been very effective in their dealings with China.”

Last week, U.S. lawmakers reintroduced a bill that would require an annual assessment of Hong Kong’s political autonomy to determine if it is sufficiently independent from China to retain its special trading status. Nancy Pelosi, Ted Cruz, Ilhan Omar and Elizabeth Warren are all among the growing number of U.S. politicians speaking out in support of the protests.

Australia, the E.U., Taiwan the U.K., and Germany have also expressed concern over the extradition law and its potential impact on foreign citizens living in Hong Kong.

The police have been widely condemned for using what Amnesty International described as “excessive force.”

The protesters have shown no sign of backing down, and have given Lam a deadline of 5 p.m. Thursday to meet their demands, or face further demonstrations.

“The whole of Hong Kong is angry at them—the government and the police,” said a young called Kanas, in a crowd of demonstrators outside the legislature late Tuesday. “Now there is seething public discontent, so she wants to slightly calm everyone down [and make us think] ‘At least she is willing to say sorry, shall we be less radical?’”

The 20-year-old added: “We must not be cheated by these superficial apologies.” 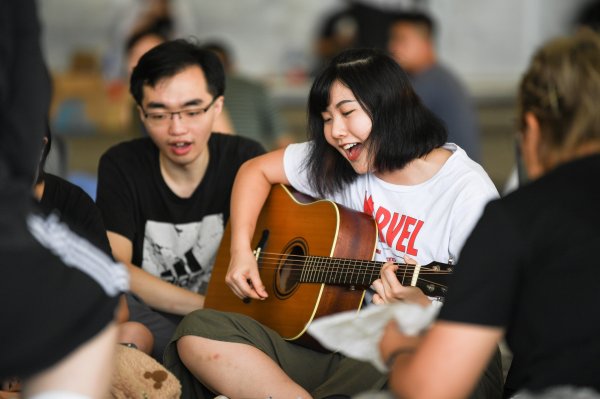 Sing Hallelujah to the Lord: Anthem of Hong Kong's Protests
Next Up: Editor's Pick