The Handmaid's Tale Was a Warning. Three Decades Later, Margaret Atwood Is Back With Another

Margaret Atwood wants to know more about The Bachelorette. We’re chatting in her publisher’s office in Toronto when I mention the dating show where 30-some men vie for the affection of a single woman, all on camera. She has questions: “Why are they even participating in this?” “What if they’re rejected?” “I’m wondering if she’s just pretending to go along with it?”

There is an irony here, observing Atwood equate the show to Sartre’s adage “Hell is other people” come to life. She is, after all, known for a book that describes one of the most brutal mating rituals in the canon. In her landmark 1985 novel, The Handmaid’s Tale, a totalitarian theocracy has taken over the U.S. in the midst of a fertility crisis. Offred, one of few women who can still bear children, is forced to participate in reproductive-slavery ceremonies in the Republic of Gilead. Offred’s story ends with a notoriously ambiguous cliff-hanger: she steps into a van that will take her either to fresh hell or to freedom. For 34 years, Atwood, now 79, has deflected readers’ questions about her protagonist’s fate. But on Sept. 10, she will publish The Testaments, a new book that promises to resolve that mystery and many more.

The Testaments arrives at the peak of Atwood’s prominence. In 2017, her 32-year-old novel soared back to the best-seller list when it became one of a handful of classic dystopias that seemed to portend troubling themes of the current era and evoke prescient anxieties about women’s rights. Three months after Donald Trump’s Inauguration, Hulu premiered an adaptation with Atwood’s involvement that has won 11 Emmys. Women’s-rights demonstrators around the globe — at pro-choice rallies in South America and Europe, at Supreme Court Justice Brett Kavanaugh’s confirmation hearing in the U.S. — have donned the handmaid uniform of crimson cloaks and white bonnets to make their case. Atwood’s voice has become a rallying cry against climate change and threats to equality — last year she headlined a summit on the intersection of those issues, named after a reference to The Handmaid’s Tale. Protest signs at the 2017 Women’s March bore the slogan “Make Margaret Atwood fiction again,” her name now synonymous with resistance.

Atwood long rejected calls for a sequel because, she says, she knew she couldn’t re-create Offred’s voice. But as she saw the world change, she realized Offred wasn’t the only way back into the story. She began drafting The Testaments partway through 2016.

The anticipation has few precedents. The U.S. publisher announced a 500,000-copy first-print run, and the novel made the Man Booker Prize short list despite a strict embargo. Atwood will launch it with a live interview onstage in London, which will stream to 1,300 cinemas around the world. It’s a larger-than-life reception for a larger-than-life figure, one still a tad bewildered by the fanfare. She makes a point of stating the obvious: “It’s just a book.”

Growing up in Canada, Atwood wrote whenever she could — in the high school yearbook, in a college magazine under the pseudonym Shakesbeat Latweed. Her early jobs included a teen venture in puppeteering and later market research, and she published her first novel, The Edible Woman, in 1969. Since then she has published more than 60 works of fiction, non-fiction, graphic novels, poetry and children’s literature. The Handmaid’s Tale was a breakthrough, landing her on the Booker short list for the first time. In 2000, she became the first Canadian woman to win the award, for The Blind Assassin.

Photograph by Mickalene Thomas for TIME

On the patio of her neighborhood café, Atwood glances over her shoulder to scan for eavesdroppers. “Things never used to be like this,” she says, peeking out from under a sun hat. Caution is justified: the plot of The Testaments is the closest-guarded secret in publishing since Harry Potter lived (again). Impostors posing as book agents tried to steal the digital manuscript, so publishers around the world agreed to go analog. Rare copies were distributed under fake names, like The Casements by Victoria Locket.

Atwood famously wrote part of The Handmaid’s Tale in Cold War–era Berlin, influenced by the fog of distrust that shrouded the East. That same atmosphere propels the sequel, which is narrated by three women. One was raised in Gilead, too young at its rise to remember a life before it; another is a Canadian teen with a past she has yet to understand; the third is Aunt Lydia, a villain in the regime and the only one of the three to have appeared in the foreground of The Handmaid’s Tale. In swift prose — lightened by winking references to American history, like a café named for anti–Equal Rights Amendment activist Phyllis Schlafly — Atwood weaves together three distinct narratives to chronicle the rise and fall of Gilead.

Over the course of several interviews, Atwood doles out measured tidbits about her experience writing the book. She admits to feeling some nerves about the highly anticipated project but closes the topic with a pat “What is life without challenges?” She often veers toward history and deadpans jokes; she’s not a “Dear Diary–type of person,” she says. When asked how she feels about the excitement surrounding The Testaments, she offers a few words but soon dives into a lesson on Icelandic manuscripts. Before describing her path to writing in terms of the politics of the 1940s and ’50s, she pauses to ask when I was born. “That’s hilarious,” she says. “You remember nothing.”

Atwood’s talent for capturing history’s tendency to repeat itself has led some to call her a prophet. (She insists she’s not — just ask her old colleagues at the market-research firm where she declared Pop-Tarts would never take off.) Certain scenes from The Testaments — children ripped from the arms of their parents, flights across borders, inhumane detention centers — track closely with today’s headlines. But Atwood can point to multiple historical examples for each. She has a rule that each of the dark circumstances, rules and customs in The Handmaid’s Tale, The Testaments and the TV show, which range from genocide to ritual rape, must have a historical precedent. “I didn’t want people saying, like some have said, ‘How did you make up all this twisted stuff?'”

She sees her role as the person who drops a flare on the highway — she wrote the new book in part because she worries the world is trending more toward Gilead than away from it. A child of the ’30s, Atwood sees authoritarianism tightening its grip in Europe, but also in leading U.S. Republicans’ response to election interference: “It just does not compute,” she says. “Unless of course what they really want is an authoritarian regime. If that’s what they really want, spit it out: ‘We hate democracy.'”

Yet even in Atwood’s darkest writing, optimism prevails. Both Gilead novels end with scenes that indicate common sense has triumphed. Their narrators record their stories for the benefit of history, a perspective that leaves room to hope for a better world. “If you are reading,” Atwood writes in Lydia’s determined voice, “this manuscript at least will have survived.”

One autumn, as Atwood was sweeping leaves outside her Toronto mansion, the man next door told her people refer to her as the “wicked witch” of the neighborhood. (The broom didn’t help.) Her mythology precedes her. Bruce Miller, the Handmaid’s showrunner, remembers every head turning as she entered a restaurant. When someone at the table asked her what it’s like to be a national treasure, she offered a perfectly Atwood response: “Exhausting.”

The author exists in a surreal intersection between her image and her life’s more stark realities, where caring for loved ones often takes precedence. Her partner, the novelist Graeme Gibson, is living with dementia. The morning after a doctor’s visit, Atwood runs through to-dos in the basement office in her home: there are appointments to schedule and bills to pay, a condo dispute to chase. (She stays in caretaking mode with me: “You were a naughty person, you didn’t eat any muffins,” she scolds, then sends me off with banana bread.)

Atwood has never been the type for superstitious writing rituals. She wrote The Testaments in hotels around the world, on trains and planes, wherever the phone couldn’t ring. Gibson wanted to re-create a voyage from his youth, traveling by ship to Australia. So Atwood did the first edit of The Testaments over the 21 days at sea while he slept.

She has a list of things she’d like to do but wonders if she’s too old: trek across Baffin Island, travel to Africa. She won’t say for sure whether she’ll write more Gilead novels (fans: it’s not a no) — in fact, she’s not much for discussing her future at all. Someday, she acknowledges, she’ll be “forcibly” retired. But she takes aging in stride. “There’s a lot of respect that comes with being the me that people recognize,” she says. “But if it’s the me that people don’t recognize, I’m just another old lady.”

In her office, Atwood strides past shelves of her archives — first editions, foreign translations, the original art from the best-known Handmaid’s Tale cover — pulling an item here and there to give away. Later she’ll meditate on the meaning behind our choices of what we keep and what we discard. What she’s really talking about is legacy, what we leave behind and how it may one day prove useful to our “Dear Readers,” whoever they may be. She asks me how many love letters from 1961 she should keep, and I suggest she hold on to the ones that speak to her, missing the point. “I don’t think it matters whether they speak to me or not,” she says. “Whether they speak is more interesting.” 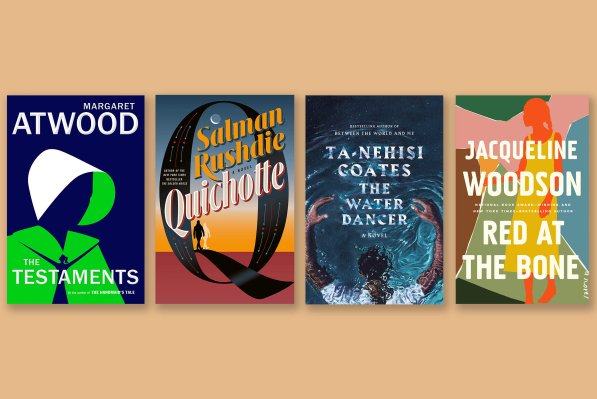 The 42 Most Anticipated Books of Fall 2019
Next Up: Editor's Pick