SEPT. 4: One of a dozen protesters dressed in The Handmaid's Tale costumes walks in a circle in the atrium of the Hart Senate Office Building during the confirmation hearing of Brett Kavanaugh
Bill Clark—CQ-Roll Call,Inc.
By Billy Perrigo

A “sexy” Halloween costume inspired by the dystopian novel and TV series The Handmaid’s Tale is no longer being sold after receiving a barrage of online criticism for sexualizing the show’s subject matter — women subjugated by an oppressive government.

The online retailer Yandy, which designed and sold the costume, issued an apology Thursday following the backlash. “Over the last few hours, it has become obvious that [the costume] is being seen as a symbol of women’s oppression, rather than empowerment,” the company wrote in a statement shared on Twitter.

“This is unfortunate as it was not our intention on any level. Our initial inspiration to create the piece was through witnessing its use in recent months as a powerful protest image,” the statement continued. “Given the sincere, heartfelt response, supported by numerous personal stories we’ve received, we are removing the costume from our site.”

Before being taken down, the costume’s product description read: “An upsetting dystopian future has emerged where women no longer have a say. However, we say be bold and speak your mind in this exclusive Brave Red Maiden costume featuring a red mini dress, a matching cloak with an attached hood, and a white bonnet headpiece.”

In the Handmaid’s Tale, women have had their rights eroded by an authoritarian government, which forces them to bear children and effectively act as slaves. The main character describes herself as a “two-legged womb.”

Many Twitter users quickly pointed out the costume was problematic given the show’s subject matter. “This is so far from the point,” one wrote.

Dressing up in the handmaid’s signature red capes has become a symbol of women’s resistance in the real world in recent months. Earlier this month, dozens of women donned the crimson capes and protested at Brett Kavanaugh’s confirmation hearing.

This is far from the first controversial Halloween costume that has forced a company to roll back its product. In 2016, Disney stopped selling a controversial Moana costume after people said its brown skin was racist. 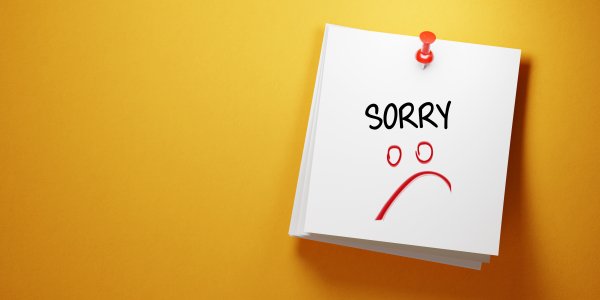 How to Make the Perfect Apology
Next Up: Editor's Pick