For years, leaders in the fight against climate change have sought to use international trade as a weapon, pushing world leaders to penalize countries that aren’t stemming warming emissions by restricting trade with them on the global market. But for the most part, the measures have gained little traction.

Last week, that changed. As tens of thousands of fires engulfed the Amazon, the European Union threatened to block a landmark trade deal with Brazil and ban imports of Brazilian beef if the country’s right-wing leader, Jair Bolsonaro, didn’t act. Within days of the threat, and as G-7 leaders prepared to discuss the matter in France, Bolsonaro buckled, abandoning his passive approach to the crisis and sending more than 40,000 troops to fight the fires.

The trade fight over the Amazon represents a little noticed, but important development in the fight against climate change. As countries diverge in their efforts to combat climate change, with some expending significant resources and others ignoring the issue, policymakers are increasingly looking to use trade rules to push others to act and to promote their own low-carbon products.

And in an ironic and unexpected turn of events, it appears that despite taking the U.S out of the international effort to combat climate change, President Trump’s destruction of trade norms may have cleared the way for a powerful new weapon in the fight as countries increasingly crack down on rogue climate counterparts.

“Previously politicians didn’t want to reach for those kinds of weapons, but we’re in the Wild West now,” says Aaron Cosbey, a researcher at the International Institute for Sustainable Development who studies the link between climate change and trade. “Trade has powerful potential.”

The new trade threats stem from fires in the Amazon rainforest set by farmers looking to increase the land available for agriculture. Brazil’s National Institute of Space Research (INPE) has identified more than 70,000 fires this year and says the number of fires so far this represents a nearly 80% increase over the same period in 2018.

The destruction of the Amazon not only threatens to destroy biodiversity and affect the lives of indigenous people but also to rapidly accelerate climate change. The Amazon absorbs carbon dioxide that would otherwise trap heat in the atmosphere. Burning trees releases the heat-trapping gas. And, while fires have burned with the same or greater intensity in the past, scientists warn that the region could be dangerously close to a tipping point that would make it impossible to restore the rainforest and sustain the region’s ability to absorb carbon dioxide.

Bolsanaro has previously questioned the science of climate change, while leaders in the EU have long rejected his position. Around the world, policymakers have sought not only to clean up their own carbon footprints but also to push other countries to act.

But the rate of destruction in the Amazon accelerated those often-subtle diplomatic efforts. In statements in the days leading up to the G-7 summit, France and Ireland both suggested that they might withhold support for a landmark trade deal between the European Union and a handful of South American countries if Bolsanaro did not take the matter seriously. “Under these conditions, France is opposed,” French President Emmanuel Macron’s office said in an Aug. 23 statement.

The deal, known as the European Union–Mercosur Free Trade Agreement, would eliminate the majority of tariffs between the EU and the Mercosur common market, which includes Brazil, Argentina and others. Officials announced a deal in June after two decades of negotiations, but it still requires approval from constituent countries. European Council President Donald Tusk said it was “hard to imagine” the deal going through if Bolsonaro did not take action.

Finland, which currently chairs the Council of the European Union, suggested a different path: restricting Brazilian beef imports. Brazil currently exports 120,000 tonnes of beef annually to the EU, a figure Brazilian producers hope to grow in the coming years. Finland’s finance minister said in a statement late last week that he would raise the possibility of banning Brazilian beef at a meeting with his EU counterparts in September “if progress has not been made before then.”

One important reason countries are willing to wield trade as a weapon, experts say, is that President Trump has normalized saber rattling in world markets. Trump is no friend of climate change measures, but his threats to launch trade wars and impose tariffs on other countries have weakened the international trade regime, making once-anathema measures like tariffs and import restrictions more politically palatable. More directly, his administration has weakened the World Trade Organization, a body that could ordinarily block measures like a ban on imports from a particular country.

“It might be illegal, but it almost doesn’t matter anymore,” says Cosbey, noting that the WTO panel that could overturn a ban on Brazilian beef lacks the members to overrule it because the Trump administration won’t approve them.

In a world where the U.S. and China exchange escalating tariffs affecting goods valued in the hundreds of billions of dollars, it would be easy to write off the threat as small potatoes. Indeed, in the past week the U.S. and China have respectively announced hiked tariffs on $550 billion and $75 billion in goods.

But in the long-term the current trade spat could be overshadowed as countries vie to control the 21st century market for clean energy and low-carbon products. A country that requires its own companies to reduce their emissions will want to punish other countries that have not enacted such measures.

“This market is going to be the dominant market of the world for the rest of this century,” John Kerry, the former U.S. Secretary of State who proposed a border carbon fee as a U.S. senator, told me earlier this year. “If in the United States is not a commanding position in it our economy will suffer tremendously.”

There are hints of this discussion already. Earlier this year, Macron proposed a “carbon tax on borders” for the EU. In the U.S., where climate policy experts are divided on a slew of different measures, a similar idea has gained a wide range of endorsements, from Vermont Senator Bernie Sanders who proposed “a fee on imported Carbon Pollution-Intensive Goods” as part of his presidential campaign to a group of Republican elder statesmen calling for a carbon tax. Legislation that includes such a measure, among other things, has nearly 60 co-sponsors in the House of Representatives.

Trump, who has boasted that trade wars are “good” and “easy to win,” may think climate change is much ado about nothing. He has repeatedly denied the science of climate change when confronted on the topic and on Monday at the G-7 said that he was not going to “lose” the American economy “on dreams” and “windmills.” But at some point in the not-so-distant future, the trade environment he helped create may be a lot harder for the U.S. to navigate, in part because of his denial of the reality of climate change. 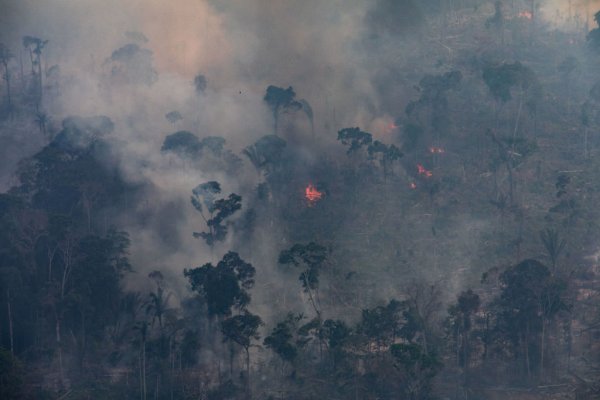 The Real Reason the Amazon Is On Fire
Next Up: Editor's Pick