What to Know About the Mass Shooting in Las Vegas

At least 59 people were killed and 527 were injured after a man opened fire on a country music festival in Las Vegas on Sunday in what appears to be the worst mass shooting in modern U.S. history.

Police say Stephen Paddock, a 64-year-old man from Mesquite, Nev., opened fire on the Route 91 Harvest Festival from the 32nd floor of the nearby Mandalay Bay Resort and Casino. Concertgoers reported seeing flashes of muzzle light coming from the upper floors of the hotel and hearing bursts of gunfire over a period of nine minutes.

A SWAT team later found Paddock dead in a hotel room, which was filled with 23 firearms.

Here’s what to know about the shooting:

At least 59 people were killed in the Las Vegas shooting

The dozens of those killed during the massacre Sunday evening included an off-duty police officer who coached youth football, a middle school special-education teacher, an Alaskan fisherman celebrating a successful season and a young woman who had graduated from high school just two years ago, among many others.

Another victim has been identified by his wife as 29-year-old Sonny Melton, a Nashville nurse. The couple was at the music festival together and Heather Gulish Melton said her husband died saving her life.

“At this point, I’m in complete disbelief and despair,” she told NBC affiliate WCYB. “I don’t know what to say. Sonny was the most kind-hearted, loving man I have ever met. He saved my life and lost his.”

As families, friends and colleagues learn more details of their fallen loved ones, many others injured from the shooting were hospitalized in Las Vegas as thousands of people spent hours in line to donate blood.

The suspect, identified as Stephen Paddock, was a 64-year-old man from Mesquite, Nev. A SWAT team found him dead in a hotel room on the 32nd floor of the Mandalay Bay Hotel and Casino across the street from the Route 91 festival, authorities said.

Police used a controlled explosion to get into the room, where they found 23 guns, some with scopes, which Paddock had carried into the hotel using “an excess of 10 suitcases,” Lombardo said.

Authorities also discovered two gun stocks, which could have allowed him to modify weapons to make them fully automatic, AP reports, citing police sources who requested anonymity because the investigation was still ongoing.

Eric Paddock, the suspect’s brother, told reporters on Monday that Stephen was a retired accountant who frequently made trips to Las Vegas to gamble. The brother appeared shocked by the incident, and said he believes his brother had no affiliation with any kind of extremist organization.

Authorities have described the shooting as a “lone wolf” attack, and police said that social media rumors of multiple shooters at multiple resorts were false.

Police have also located a woman named Marilou Danley, who they believe to be Paddock’s roommate and girlfriend. Though authorities ruled her out as a person of interest before, police said on Monday that Danley is still a person of interest. Police said she is currently in the Philippines.

Police are still investigating the motive of the shooting, but said on Tuesday that the attack as premeditated. Paddock, they said, set up cameras inside and outside of his hotel room, and Lombardo said he believes that was done to monitor police coming to take him into custody.

“I can’t get into the mind of a psychopath at this point,” Lombardo said, when asked about the motive behind the attack on Monday, according to the Associated Press.

The AP reported that besides his gun cache, Paddock also had an interest in high-limit video poker and real estate deals.

Clint Van Zandt, a former FBI hostage negotiator and supervisor in the bureau’s behavioral science unit told AP that Paddock’s profile did not match that of a typical mass murderer: he was much older than is usually the case and was not known to be suffering from mental illness. “My challenge is, I don’t see any of the classic indicators, so far, that would suggest, ‘OK, he’s on the road either to suicide or homicide or both,” Van Zandt said.

But Paddock’s weapon horde and his actions did suggest the mass shooting had been planned at least days in advance, Van Zandt said. “He knew what he wanted to do. He knew how he was going to do it, and it doesn’t seem like he had any kind of escape plan at all,” he added.

ISIS claimed responsibility for the atrocity and said that Paddock had converted to Islam months ago, according to the AP. But ISIS, which has falsely claimed responsibility for attacks previously, did not provide any evidence for its claim. The FBI later said it has no immediate evidence linking the shooting to an international terror organization.

Paddock’s family members expressed shock and confusion when they learned that he was responsible for the attack. “We are completely dumbfounded,” his brother, Eric Paddock, said in an interview with the Orlando Sentinel. “We can’t understand what happened.”

In remarks Monday morning, President Trump called for national unity and described the shooting as “an act of pure evil.” Trump praised first responders for their quick reaction and offered his condolences to the families of the victims. “We are praying for you and we are here for you, and we ask God to help see you through this very dark period,” Trump said.

The White House issued a proclamation that all flags be flown at half staff through Oct. 6 in remembrance of the victims. Lombardo wrote on Twitter that he had received a call from the President, who said he will travel to Las Vegas on Wednesday.

Attorney General Jeff Sessions said in a statement that he had also spoken with Lombardo and offered him full support from the FBI, Department of Justice and the Bureau of Alcohol, Tobacco, Firearms and Explosives. Sessions also said he met with FBI Director Christopher Wray on Monday morning.

How celebrities and officials reacted to the Las Vegas shooting

Country singer Jason Aldean, who was partway through his set at the Route 91 Harvest Festival when gunshots rang out, called the incident “beyond horrific” and said he and his crew members were safe.

“Tonight has been beyond horrific,” Aldean wrote in an Instagram post early Monday morning. “It hurts my heart that this would happen to anyone who was just coming out to enjoy what should have been a fun night.”

Ariana Grande — whose concert in Manchester, England was rocked by a deadly suicide bombing attack in May — spoke out Monday. “We need love, unity, peace, gun control & for people to look at this & call this what it is = terrorism,” she wrote on Twitter.

Meanwhile, world leaders sent condolences, and some Democratic lawmakers demanded action on gun control in the wake of the violence.

“To my colleagues: your cowardice to act cannot be whitewashed by thoughts and prayers,” said Sen. Chris Murphy of Connecticut, where the 2012 shooting at Sandy Hook elementary school took place. “None of this ends unless we do something to stop it.”

Write to Alana Abramson at Alana.Abramson@time.com, Joseph Hincks at joseph.hincks@time.com and Katie Reilly at Katie.Reilly@time.com. 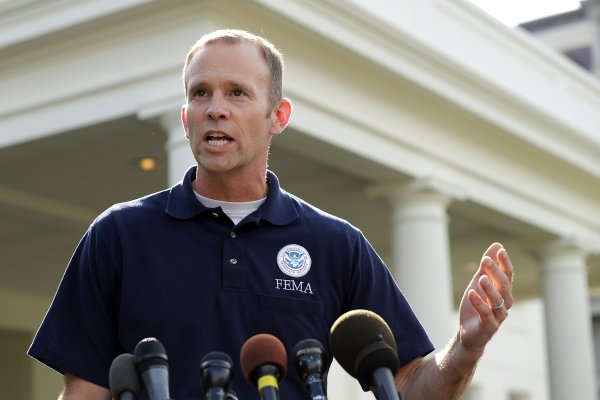