Searing Photos From 20 Years of Mass Shootings in America

Mass shootings are a grim reality of life in the United States, with at least eight such incidents occurring in 2019 so far. The loss of at least 29 lives in El Paso, Texas and Dayton, Ohio in less than 24 hours is just the latest additions to an ever-increasing national death toll.

Since the Columbine shooting in 1999, there have been many U.S. massacres that have claimed dozens of victims. Mass shootings have become such a common occurrence, they have transformed American life — turning places that were once thought safe, like schools, movie theaters, nightclubs and concert venues, into areas where people now arrive worried about worst-case scenarios.

Yet with each shooting, there is a routine: the list of victims, the “thoughts and prayers” from politicians, the outpouring of grief from families and community members and the feelings of hopelessness that pervade the nation.

Photos can document these tragic events, capturing the horrifying moments, the loss of life, the belongings victims leave behind and the ways communities grieve and move forward — only to see another community experience similar horror in the future.

The following 13 photos capture the fear, hurt and chaos from a dozen major mass shootings in the U.S. in the 20 years since Columbine.

View of damage to the west entryway to Columbine High School where teenage gunmen Eric Harris and Dylan Klebold entered the school April 20, 1999 in Littleton, Colo. Flags mark points where evidence such as bullet casings were found.
Courtesy of Jefferson County Sheriff/Getty Images

Student Kevin Sterne, is carried out of Norris Hall at Virginia Tech in Blacksburg, Va. in this April 16, 2007 photo. Sterne was one of the wounded students who survived the mass shooting on April 16.
Alan Kim—The Roanoke Times/AP

Police examine the car of James Eagen Holmes behind the theater where a gunman opened fire on moviegoers in Aurora, Colo. July 20, 2012. A total of 71 people were shot and 12 people were killed in the Denver-area movie theater, the local police chief said. The suspect, identified by police as James Eagan Holmes, 24, also booby-trapped his Aurora apartment with sophisticated explosives, creating a hazard for law-enforcement and bomb squad officers who swarmed to the scene.
John Wark—Reuters

Photographs of the nine victims killed at the Emanuel African Methodist Episcopal Church in Charleston are held up by congregants during a prayer vigil at the the Metropolitan AME Church June 19, 2015 in Washington, DC.
Win McNamee—Getty Images

People run from the Route 91 Harvest country music festival after apparent gun fire was heard on Oct. 1, 2017 in Las Vegas.
David Becker—Getty Images
View of the festival grounds showing scattered belongings and chairs, left behind at the site of the mass shooting, Oct. 3, 2017.
Matt Stuart—Magnum for TIME

Students head back to school at Marjory Stoneman Douglas High School on Wednesday, Feb. 28, 2018 for the first time after a gunman killed 17 students in the school on Valentine's Day.
Mike Stocker—Sun Sentinel/TNS/Sipa USA

Shoes are piled outside the scene of a mass shooting including Ned Peppers bar, Sunday, Aug. 4, 2019, in Dayton, Ohio. Several people in Ohio have been killed in the second mass shooting in the U.S. in less than 24 hours, and the suspected shooter is also deceased, police said.
John Minchillo—AP
More Must-Read Stories From TIME 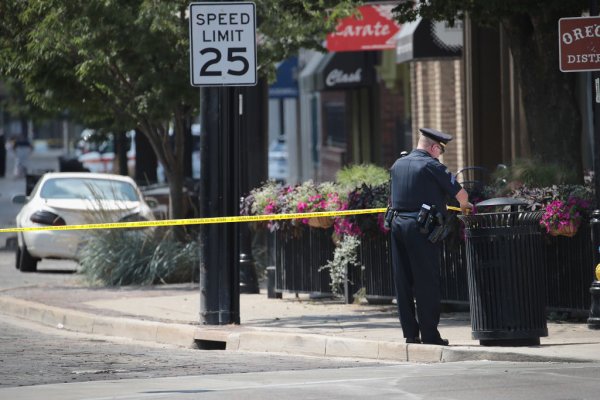 9 Dead in 32 Seconds in Dayton Shooting
Next Up: Editor's Pick