'It's Almost About Anything But the Guns': Sandy Hook and the Original Meaning of the Second Amendment

Five years after the Dec. 14, 2012, horror in Newtown, Conn. — when 20 children and six adults were gunned down at Sandy Hook Elementary School by 20-year-old Adam Lanza — the tragedy is still fresh in the minds of many Americans. During the intervening years, Sandy Hook has become a byword of sorts, especially in conversations after subsequent mass shootings; in the debate over guns in America, Sandy Hook has come to represent for some both the ultimate argument for restrictions and the ultimate proof that such restrictions are exceedingly difficult to introduce.

Much more than five years will have to pass for historians to be able to pinpoint the exact legacy of that day, especially in terms of what kind of role it will play in future gun-control legislation. But in the aftermath of the shooting, some key shifts in the national conversation about guns and the Second Amendment did take place. For a perspective on that history, TIME spoke to Saul Cornell, an expert on the Second Amendment who holds the Paul and Diane Guenther Chair in American History at Fordham University.

TIME: Where do you think Sandy Hook falls in the history of guns in America, or is it too soon to tell?

CORNELL: The trends I saw emerging after Sandy Hook are still playing out, but I think there’s no question that Sandy Hook is something of a turning point. You started to have, for the first time, some funding [for gun-control causes], largely due to Mayor Bloomberg’s group, which finally made resources available. If you look at the amount of money that [the Brady Campaign to Prevent Gun Violence] had had compared to the NRA, it really is a David and Goliath. The gun-rights community likes to portray itself as David against Goliath but it’s really quite the other way around.

Partly because of these new resources, another important change [since Sandy Hook] is the organization of these moms who were difficult to organize before the emergence of social media. The gun-rights community has had a number of social spaces and political channels to immediately translate their vision into politics. If you think about the constituency that’s most affected, most articulate and most invested in the gun safety, it’s mostly moms. It’s the rise of social media that has allowed things like Moms Demand Action to emerge and leveled the playing field somewhat. That is here to stay, and that has been lasting. And then victims started to have their voice. Think about Mark Barden, who wrote [a letter] to Richard Martinez, the father in Santa Barbara [whose son was killed in a 2014 shooting spree]. He framed the issue in a way that resonated with people, and he was able to be put in touch with people who could help him get out that message.

Is there a way to evaluate yet the legacy of the gun laws enacted since Sandy Hook?

After Sandy Hook, America basically moved in two opposite directions at the state level. Places that had relatively weak gun-control regimes made them weaker, and places that had relatively strong gun-control regimes made them stronger. There was a study that was just published that argued the gun-buying binge after Sandy Hook led to increases in accidental discharges and injuries. But Connecticut and New York enacted a series of gun control regulations, tightened things up. There is not a single position on this issue in America. We are really fundamentally divided as a nation over how to address this issue. Although Sandy Hook had some profound impacts, it did not move the national debate toward a more common-sense recognition that certain kinds of common-sense regulation would make us safer without imposing an undue burden or cost to gun owners.

One of the issues with looking at how laws could have prevented Sandy Hook is that Adam Lanza had access to guns technically owned by his mother, who was also killed that day. She owned several guns, and has been described as a collector. Where does that idea, of collecting guns, fit in with the history and original intent of the Second Amendment?

Nobody could afford an arsenal in the 18th century. Guns were too expensive. I’ve always been arguing that the real Second Amendment created in the 18th century would be a nightmare to modern people who [support] the Second Amendment. The real Second Amendment gave government the power to compel you to bear arms. There were actually provisions in the first state constitutions protecting the right not to bear arms. You never hear about those. The government could tell you to buy a gun, which is a form of taxation. The first unfunded federal mandate is the first militia act, where the government said you have to buy a gun and said we’re not going to give you a tax credit, we’re not going to subsidize it, it comes out of your own pocket because it’s part of a scheme of funding public defense by transferring it to individual households who bear part of the cost of that by outfitting themselves with a musket. And they [the government] could inspect your musket. They could fine you if it wasn’t properly taken care of. These are not libertarian impulses. The Second Amendment is as much about government regulation of firearms as it is about the right of citizens to have those firearms. They are two sides of the same coin.

The government policy is sort of built around the idea of relative scarcity of weapons. You want to construct government policy to encourage people to get the weapons they need to meet their militia obligation. Disarmament in the 18th century is not about black helicopters coming to take your guns away, which is the fantasy in contemporary America, but people opting out of buying a burdensome, heavy musket or selling it in favor of a gun that’s more useful for being a farmer. You needed a weapon to shoot turkeys, to get rid of critters eating your crops.

What else was going at the time the Second Amendment was passed that affected the decision to add it to the Constitution?

What we often forget about the world that gave us the Second Amendment is that it was a small, face-to-face, agrarian society, everyone knows everyone’s business. I like to say that the 18th century militia is sort of like the Rotary Club, the National Guard and the Boy Scouts all rolled into one. It’s one of the foundational institutions that cements together these small rural communities.

There’s a war for dominance of North America, between competing powers. You’re on the edge of the British empire; you have Indians not happy their land was taken; you have the French Catholics in Quebec and the Spanish Catholics in Florida. You have got geopolitical conflict between England and the Catholic empires of the continent for most of the 17th century, so a well-regulated militia is all that stands between you and all kinds of hostile entities on your borders.

In the 18th century, rates of interpersonal violence among whites — people of European extraction — are relatively low. Obviously rates of violence against Native Americans are horrific, but in New England [between white residents] they approach practically Swedish levels. Most people don’t choose to kill people with guns. You’re much better off picking up a two-by-four and smacking someone over the head than you are picking up your musket if you want to kill somebody; it’s too time-consuming to load your musket and you aren’t going to leave your musket loaded because the powder is corrosive. Handguns were a fraction, less than 10%, of the stock of weapons that Americans owned. Unless you’re Alexander Hamilton or Aaron Burr, who but a rich gentlemen is going to bother with a handgun?

So we don’t see guns begin to become a serious problem in terms of interpersonal violence until cheap and reliable handguns emerge in the Jacksonian period [ca. 1820s to 1840s]. You have the industrial revolution and new industrial modes of production, and firearms is one of the areas where machine-made parts and interchangeable parts are pioneered. That’s when you start to see lots of writing about the rise of cities, where there’s more anonymity where people aren’t living in family units, and are starting to see people carry concealable weapons like pistols. That all post-dates the Second Amendment, and I think, really, the dynamics of our modern gun debate owe much more to that period. That’s when you get the first laws that are generally modern-style gun control laws saying, “These guns are being used for interpersonal violence; let’s ban them.” You get the first cases deciding whether that’s Constitutional under state laws.

Is that also when you start to see people owning many guns?

There’s very interesting book on the history [of gun marketing in America] by Pamela Haag, who makes the point that if you look at the way guns are advertised in the 19th century, it’s very utilitarian—”This one’s good for this!”—while the modern advertisement is, “This is your man card!” To some extent, Samuel Colt in the 19th century begins this process by coming up with idea of guns as a peacemaker, making people more equal, but it’s really in the 20th century that you have the more sophisticated media apparatus to really market a whole set of individual identities tied to the ownership of firearms.

That’s what’s so interesting about the modern gun debate. In a way, it’s almost about anything but the guns. It’s about liberty, masculinity, independence — but these are all ideological constructs that are layered onto this inanimate object.

Are there any major court cases that have shaped the meaning of the Amendment over the years?

I wrote an article in Yale Law Journal Forum that talks about how, if you look closely at District of Columbia v. Heller — the 2008 case that basically asserts the Second Amendment is not about the militia but about an individual right to self-defense and protects handguns — it cites these southern slave-owning judges who had a broad view of the right to carry guns. We don’t usually take our cues from southern slave-owning judges in other areas of American law, but this is what Justice Scalia and the majority decided to do. What I eventually found, is the reason there weren’t cases from other parts of America is that they had strong laws that were never challenged. We’ve actually taken a minority tradition and we’ve sort of made that the meaning of the Second Amendment. 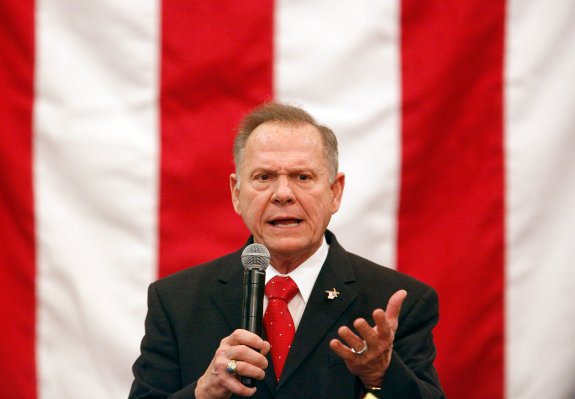 Roy Moore Is Going to Cause a Longterm Headache for the GOP
Next Up: Editor's Pick