A Deadly Heat Wave After the Hottest June On Record: How the Climate Crisis Is Creating 'a New Normal'

More record-breaking heat was reported throughout Europe in a second heatwave to strike the continent so far this summer. Scientists say July will likely be the hottest July on record, following the hottest June on record. These types of heatwaves are expected to become more frequent throughout the world as global warming continues, say scientists.

Extreme heat was felt in France, England, Luxembourg, Netherlands, Belgium and Germany. Paris experienced it’s hottest day in history on July 25, where temperatures reached 108.7 degrees Fahrenheit. The previous record was 104.7 degrees more than 70 years ago, according to AccuWeather. At least five people have died as a result of the heat, AccuWeather reports.

London’s highest temperature record was also broken on July 15, where Heathrow Airport saw a high of 98.42 degrees Fahrenheit. The previous record was 98.06 degrees.

The extreme July temperatures in Europe follow the hottest June on record. The National Oceanic and Atmospheric Administration (NOAA) reports the average global temperature for June was 1.71 degrees Fahrenheit above the 20th century average of 59.9 degrees. NOAA also reported record-breaking decreases in sea ice coverage in the Arctic and Antarctica.

“Our climate is warming,” Ahira Sánchez-Lugo, a climatologist at NOAA, tells TIME. “We have a new normal, we are in a new warmer climate. Just in the 21st century, we’ve set a new global world temperature record five times.”

Robert Rohde, lead scientist at Berkeley Earth, tells TIME that July is also likely to be the hottest July on record, as global temperatures continue to trend towards increasing heat.

Regionally, hot June temperatures broke records in Europe, Africa and South America, and it was the hottest first half of the year for Alaska, Madagascar, New Zealand, Mexico, western Canada and eastern Asia.

Overall between January through June, the temperature averaged out to 1.71 degrees above the 20th century average of 55.3, tying with 2017 as the hottest year so far.

Rohde says this trend can be attributed to human emissions of greenhouse gases. “This trend will continue until humans find a way to change their behavior and stop modifying the atmosphere,” Rohde says.

He points out that while the trend continues upward, the world may not see consistently warmer temperatures. “It doesn’t happen continuously,” he says. “There are fluctuations, we don’t have a new hottest year every year or a new hottest month every month, but as we move forward we expect to set many records over time.”

Why does record-breaking heat matter?

“Our extremes will change,” she says. “Drought is expected to become more intense and more frequent, heatwaves too, and all of this has consequences. Drought can impact the quality of water, the quantity of water, crops, food might get more expensive if there’s a drought.”

As temperatures continue to increase globally due to greenhouse gas emissions, the world will begin to see fewer cool days, according to Rohde.

“These conditions will start to put stress on social, economic and technical systems designed for the historical climate,” he adds. For example, agricultural systems that depend on a certain amount of rainfall that gradually starts to decrease while temperatures gradually increase.

Sánchez-Lugo says we have already seen examples of climate change effecting parts of the U.S., pointing to above average rainfall in the U.S. Midwest in June that prevented the planting and growing of crops.

“This year there were pastures that were not even planted with corn because it was so wet,” she says.

In the longterm, climate change threatens ice melting in the Arctic and Antarctic, increasing sea levels, which is already occurring. In Antarctica, sea ice coverage was 8.5% below the 1981-2010 average, the difference of 62,000 square miles, the smallest Antarctic record for June. And in the Arctic, sea ice coverage was 10.5% below average, the second-smallest on record for June.

Where have people been impacted by severe heat?

In Europe, Austria, Germany and Hungary had the warmest June on record, but heat also increased in Switzerland and France, which saw its hottest day in history on June 28 — 113 degrees Fahrenheit.

Heatwaves in Europe can be especially dangerous for elderly people in regions that are not used to high temperatures, says Piers Forster, professor of climate physics at the Priestley International Centre for Climate at the University of Leeds.

“Particularly in Europe, when heatwaves occur it can be especially damaging to harvests,” he adds. “Crops can be heavily effected, and of course you create a lot more susceptibility to wildfires, that can burn down homes and that also creates worse air pollution as well.”

The entire continents of South America and Africa and parts of Alaska saw saw the warmest June on record. In Alaska, infrastructure damage has been caused by permafrost melting due to temperature rising.

Now much of the U.S. prepares for a weekend heatwave expected to reach 100 degrees Fahrenheit. Extreme heat is the most fatal weather hazard in the U.S., according to the National Weather Service, even more deadly than hurricanes and floods.

What can be done to change the rising temperature trend?

Sánchez-Lugo, Rodhe and Forster agree the world needs to halt the the emission of greenhouse gasses in order to end the global rise in temperature.

186 countries have ratified the Paris Climate Agreement to reduce greenhouse gas emissions globally with the goal of keeping the global temperature rise below 2 degrees Celsius, or 3.6 degrees Fahrenheit, above preindustrial levels. But the U.S. announced its intention to withdraw from the agreement in 2017. 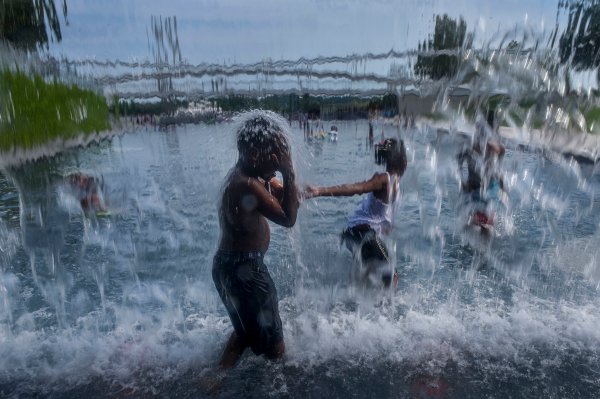 195 Million at Risk From Weekend Heatwave
Next Up: Editor's Pick