Sam Lightle, left, from Anchorage, and Brandon York from Jacksonville, Florida, take in the scenery along a creek below the Byron Glacier on July 4, 2019 near Portage Lake in Girdwood, Alaska. Alaska is bracing for record warm temperatures and dry conditions in parts of the state.
Lance King—Getty Images
By Tara Law

It’s about 80 degrees inside Brian Brettschneider’s Anchorage, Alaska home, but he can’t open up his windows. Smoke is drifting into the city from the nearby Swan Lake wildfire, and he’s trying to keep the ash out of his house. In the distance, even the mountains outside of the city are hidden by smoke.

Temperatures rose to 90 degrees Fahrenheit for the first time in Anchorage, Alaska on Thursday, decimating the previous record of 85 degrees. This year, the state experienced its hottest June on record, following its hottest spring on record.

At the same time, the state is experiencing significantly more widespread wildfires, which are eating up vegetation that were dried out by the heat and spruce trees killed by spruce bark beetle, which thrive in warmer temperatures. Brett Anderson, a senior meteorologist for AccuWeather, says that 634,000 acres in Alaska have been burned by fires this year, compared to about 411,000 acres in all of 2018.

Brettschneider, a research climatologist at the University of Alaska-Fairbanks, warns TIME that extreme weather is only going to get more common in the region.

“It’s extremely challenging to attribute any particular event to climate change. But that said, it’s much more likely for these type of events to occur in a warming world,” Brettschneider says.

“It’s certainly adding to it, no question about it,” Anderson says. “It’s not as rare as it used to be.”

In Alaska, temperatures are being driven up by warmer water and reduced sea ice, Anderson says. In the northernmost parts of the state, melting permafrost is also releasing methane gas, which further contributes to climate change.

This summer, the hotter temperatures have had the worst effect in the southern two thirds of Alaska, including Anchorage, Anderson says. A week ago, temperatures in the state capital, Juneau, broke records three days in a row, according to Anderson.

The Anchorage Police Department warned that more police officers would be on duty to enforce the ban.

“Don’t risk burning down our fine town,” the Police wrote in a message to the public.

Brettschneider argues that as the climate changes, people in Alaska — and across the country — need to learn to adapt to more changeable conditions. In Alaska, he says, the state has already started to construct bigger culverts around roads to ensure that they can handle increased precipitation.

“Cities are built, to a large degree, for the climate that they exist in. In Alaska, probably zero combined houses have central air conditioning. In the entire state. Because that’s the climate that we live in — or we used to live in,” said Brettschneirder said. “We need to rethink how we build cities for the future.” 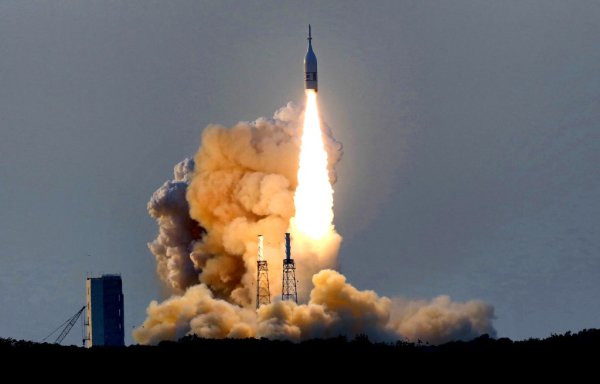 With NASA's Orion Abort-System Test, Americans Just Took a Small (and Very Big) Step Closer to the Moon
Next Up: Editor's Pick