People sunbathe in front of the Louvre Pyramid during a heatwave in Paris on June 26, 2019.
Kenzo Tribouillard –AFP/Getty Images
By Ciara Nugent

An intense early summer heatwave has hit Europe, igniting a huge wildfire in northeast Spain and breaking the all-time temperature record in France –– less than a year after the region’s last extreme heatwave.

Temperatures have climbed above 104°F in much of western Europe, far outstripping the comfortable weather normally enjoyed in the region at this time of year.

France recorded its highest-ever temperature, of 114.6°F , in the southern town of Gallargues-le-Montueux on Friday afternoon. The country’s previous record was 111.4°F, set during a heatwave in August 2003. The previous record for June, set in the same year, was 107°F.

Germany also broke its record for June, with 101.5 °F recorded in the town of Coschen near the Polish border on Wednesday. The country’s previous June record, of 101.3 °F, had been set in 1947 – a measure of how unusual this level of heat is in the region.

In Spain’s Catalonia region, the first wildfire of the summer broke out Wednesday night near the town of Torre de l’Espanyol, quickly becoming the region’s worst in 20 years. It had burned an estimated 5,700 hectares by Friday morning according to local media. Investigators say the cause may have been a “badly managed” pile of manure that self-combusted.

Hundreds of firefighters are battling the blaze. But authorities warn it will be hard to contain as temperatures in the region continue to rise to up to 109°F before the weekend.

Firefighters try to extinguish a fire near Flix on June 27, 2019 as a forest fire raged out of control in the northeastern region of Catalonia and destroyed at least 4,000 hectares.
Pau Barrena – AFP/Getty Images

French news station LCI says temperatures across the country are 25 – 30°F higher than the average for June.

“We’re talking about an exceptional, even unprecedented heatwave,” says Guillaume Woznica, a meteorologist at LCI. “Temperatures are going to be near 104°F for most of the country and because it’s arriving at a particularly humid time of the year, it feels particularly unpleasant.”

That 2003 heatwave killed 15,000 people in France and authorities are urging the public to take the heat seriously this week. The national weather agency Météo-France has placed four southern regions under a red heatwave alert –– the first time the designation has been applied in the country, a spokesman told the AFP. Most of the country’s regions are on an orange alert.

Three of France’s northern regions ordered schools to close because of a lack of air conditioning. In Paris and Lyon, city governments have banned all but the least polluting vehicles to avoid the increased risk of smog in hot weather.

Woznica says the timing of the heatwave also makes it “historic”. “We’re only one week into summer officially. To have such a widespread, long-lasting, intense heatwave before July is simply unheard of.”

Early summer heatwaves have been found to be more lethal, the World Health Organization said in a 2015 report, because people are less acclimatized to the heat than they would be in July or August.

The French health ministry has advised parents to keep children indoors during the hottest parts of the day, warning of the risk of dehydration and heatstroke. The ministry also called on citizens to check on the elderly and homeless people, making sure they have access to air-conditioned spaces.

As global temperatures rise as a result of climate change, scientists warn extreme heatwaves like this one are becoming more likely.

“Globally, these extreme temperatures are five times more likely to occur now as they would be in an unchanged climate [in pre-industrial times],” says Dim Coumou, a scientist at Germany’s Potsdam Institute for Climate Impact Research.

“There’s never a single cause for an extreme weather event. But we have very strong evidence from many types of studies — based on both observations and climate models — that these heat waves are strongly on the rise as a result of climate change.”

Coumou says Europe is experiencing a faster increase in the number of heatwaves than the global average. “One reason is that we’ve seen that the jet stream – which normally brings cool, wet and windy weather systems from the Atlantic to [Europe] – has been weakening in the summer.”

Another possible factor, he adds, is that soil on the continent may be becoming drier, leaving less water to evaporate into the atmosphere and cool the continent down. The increased heat in turn further dries out the soil, creating feedback loops.

The frequency of extreme heatwaves in the future will depend a lot on our ability to cut greenhouse gas emissions and limit global warming, scientists say.

Global temperatures have risen by 1°C (1.8°F) since the industrial era. The Paris Agreement, signed by world leaders in 2015, sets a goal of limiting future temperature increase to 2°C (3.6°F), while the Intergovernmental Panel on Climate Change (IPCC) last year called for that target to be reduced to 1.5°C (2.7°F) to avoid the most severe impacts of climate change. Both targets would require rapid and drastic changes to industry and lifestyle around the world.

“Just from the 1°C warming we have seen a very strong increase [in the frequency of extreme heatwaves and other weather events],” Coumou says. “If we get to a world that is 2°C warmer —and that will require rapidly cutting emissions – heatwaves will further intensify. But not as much as they would in a three or four degrees world.”

As Europe’s heatwave intensified Thursday, annual U.N. climate talks involving almost 200 countries closed in Bonn, Germany with little agreement on how countries should act to achieve their Paris Agreement commitments. Some delegates, including those from Saudi Arabia caused heated debates by disputing the findings of the IPCC, the AFP reports. Key points of the negotiations will be delayed until the delegates’ next meeting in Chile in December, according to the AP.

Even with rapid progress on cutting emissions, Coumou says extreme heatwaves are likely here to stay. “Right now what’s happening in Europe is still an extreme,” he says. “But these new types of very hot heatwaves are part of the new climate we’re entering.” 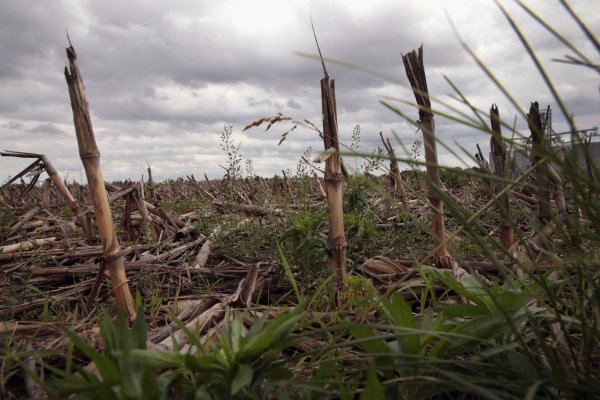 Record Floods and Trump's Trade War Are Threatening to Make This Year a 'Train Wreck' for Corn Farmers
Next Up: Editor's Pick