A Glacier the Size of Florida Is Becoming Unstable. It Has Dire Implications for Global Sea Levels

Melting ice sheets in the Antarctic, particularly one of the largest and unstable glaciers in the region, could significantly accelerate global sea level rise, according to a new report.

The climate scientists who measured likely outcomes of glacial melting at the bottom of the world focused the study on the Thwaites glacier, an area as large as Florida in western Antarctica that is considered the most unstable in the continent.

The study found that even if no further climate change happens in the future, more Antarctic ice sheets are likely to become unstable. It also states that as destabilization of glaciers in Antarctica continues, it’s increasingly likely that sea levels will rise more rapidly.

“Due to our past changes in climate there is a certain amount of sea level rise that will definitely occur in the future,” Alex Robel, a glaciologist and assistant professor at the Georgia Institute of Technology, tells TIME. He and two other scientists from the California Institute of Technology and the University of Washington wrote the report published by the National Academy of Sciences.

Earlier this year, a NASA-led study discovered that a giant cavity, two-thirds the area of Manhattan had developed underneath Thwaites, highlighting the unexpected accelerated melting in the region.

“It’s definitely distressing on a human level to think or realize the fact that there is a certain amount of not going back in terms of sea level rise that we’ve already committed ourselves to in the future,” Robel added.

The amount of ice flowing out of the region has nearly doubled in the last 30 years, losing 35 gigatons of ice per year between 2009-2017 alone. That amounts to 3% of the current rate of sea level rise according to Robert Larter, a Marine geophysicist at the British Antarctic Survey.

Marine ice sheets, which are formed when warmer ocean water melts the area between the sea’s ground floor and the ice causing a cavity, are at risk of collapsing. Scientists worry that would cause the remaining ice to melt faster.

“That’s a 3 percent contribution that wasn’t there 45 years ago,” Larter tells TIME. He says all of the ice in Thwaites glacier could increase the global sea level by a bit more than two feet. “If you have collapsed a whole glacial system then you’re creating a new front on the other glacial systems that were bordered to it. Things certainly won’t stop there,” Larter added.

Sea levels are currently rising at a rate of 3.3 millimeters per year, and have risen by 91 millimeters since 1993, according to NASA.

What did the study show exactly?

Robel, along with scientists Helene Seroussi and Gerard Roe used mathematical analysis and computer models to make projections of sea levels in the future. They wanted to understand how possible scenarios of future sea level rise might change over time as a result of marine ice sheet instability.

“The more this marine ice sheet instability occurs, the wider the range of possible future sea level rise becomes,” Robel says. “Not only that, but that range will start to skew towards scenarios of more rapid sea level rise.”

When they tested these predictions using a computer model of Thwaites glacier, they reached the same conclusion. The simulations confirmed what scientists like Larter have seen on field expeditions to western Antarctica and previous modeling studies of Thwaites glacier which have shown that the glacier is becoming increasingly unstable.

These simulations also show that there’s an important role for future expeditions to try to narrow down the possible scenarios of sea level rise from Thwaites, Robel says.

“There’s always going to be some level of uncertainty in terms of our future projections, but that doesn’t mean that we don’t know some very important things,” he added. For example it is certain that there will continue to be a rise in sea level because of past changes in climate, he says. “A fact that we have to keep in our minds next to that is that our future actions can significantly change how much sea level rise will occur in the future.”

“The bigger picture is there are some wild cards in the deck here and the more we’ve learned over the last few years the more the uncertainties are increasing,” Larter, who has studied Antarctica for 15 years and has traveled to Thwaites on scientific expeditions with the International Thwaites Glacier Collaboration, a partnership of scientists from the U.S. and the U.K., says. “Part of the aim of what we’re doing as scientists is trying to constrain the uncertainties and give better predictions, but in some ways the more we’re finding out the more uncertainties we’re discovering.”

What does ice sheet instability mean for the future of Antarctica and the world?

West Antarctica has the potential to increase sea levels by 5 meters, while east Antarctica can add 50-60 meters should the continent’s ice completely melt, Anders Levermann, a climate scientist at Postdam Institute for Climate Impact Research in Germany, tells TIME. To put that in perspective, there has been about 20 centimeters of sea level rise in the last 100-120 years, according to Levermann.

Since 1992, satellite observations for Antarctica have found that ice sheets are contributing to global sea level rise. Most of the ice loss from Antarctica comes form western Antarctica.

What is still uncertain is how fast the continent is losing ice or if the instability of the Thwaites marine ice sheet is the result of climate change, but Levermann says there simply hasn’t been enough research to know for sure.

“It is very curious that for 10,000 years nothing has happened in western Antarctica, and now it’s [unstable] 100 years after we started messing with the temperature of the planet,” Levermann says. “The warmer we make the planet, the more ice we lose.”

He added that there are more marine ice sheets in Antarctica that could become destabilized if warming continues.

Levermann says scientists will know much more in the next 20 years at the current rate of research, and adds that the world needs to prepare for significant sea level rise by the year 2100 and monitor changes to Antarctica and Greenland.

Why does sea level rise matter?

“Independent of whether this has been triggered by humans—which is a clear possibility without scientific proof yet—but apart from that, we increase the risk of sea level rise and accelerated sea level rise from Antarctica with a warming planet,” Levermann says.

Coastal cities throughout the world are at risk if sea levels continue to rise. Robel says there needs to be recognition by nations around the world that there will be sea level rises and they need to prepare for them by adapting infrastructure and taking actions that will prevent exacerbating the issue.

“Nobody has to be afraid of sea level rise. If you’re not stupid, you don’t die of sea level rise because it’s so slow that there’s time to protect against it or abandon the land,” Levermann says. “Having said that, being stupid would include not taking climate change and sea level rise seriously.” 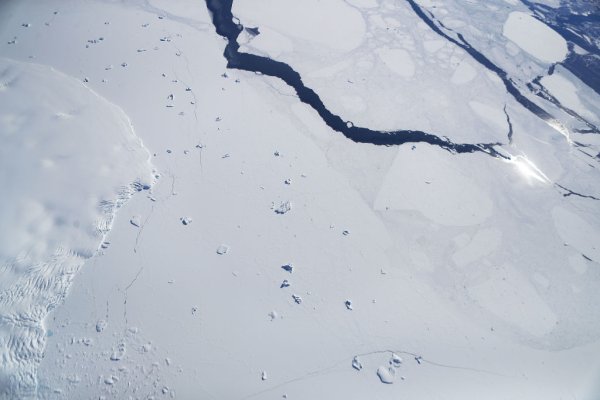