Rain clouds pass over an unplanted farm field on May 29, 2019 near Emden, Illinois. Near-record rainfall in parts of Illinois has caused farmers to delay their Spring corn planting. According to the USDA as of May 26 only 35 percent of the state's corn crop had been planted. By the same date in 2018 farmers in the state had 99 percent of the crop in the ground. As the deadline for planting nears, many farmers may be forced to leave their fields fallow. Illinois ranks number two behind Iowa in U.S. corn production.
Scott Olson—Getty Images
By MARIO PARKER / BLOOMBERG

A smartphone could fit in the space between James McCune’s index finger and thumb as the Illinois farmer describes the height of crops stunted by incessant rain and unseasonably cool weather.

Conditions and morale are so low in McCune’s area of northwestern Illinois, typically the second-biggest corn-producing state, that he organized a get-together Thursday evening at The Happy Spot, a restaurant and bar in Deer Grove, Whiteside County. About 125 farmers and others tied to the industry turned out for chicken and beer at the event, dubbed “prevent plant party,” in reference to acreage left unplanted this season.

“It’s going to be a train wreck,” McCune said.

The headwinds growers are facing are multiple. Record rain has flooded Midwest streets and snarled Mississippi River traffic, crucial to delivering inputs that farmers need and a major artery in helping them ship products. Stalled corn plantings forced the U.S. Department of Agriculture to cut its harvest estimates in its June report, only the fourth time since 2000 that the government has taken such action in that month’s data.

McCune and other farmers at The Happy Spot said the report still doesn’t fully capture how bad this year’s crop will be. Bryan Snetcher, a third-generation farmer from Shannon, Illinois, said that while he was finally able to get his crop planted, it has been a huge battle.

“You spend a week” on the land “and then it rains three days and a week later you’re doing it all over again,” Snetcher said. “Just tired of dealing with the mud this year.”

Besides the rain, farmers have borne the brunt of President Donald Trump’s trade war with China. McCune and Snetcher are among farmers that support Trump’s moves, citing unfair trade practices by the Asian nation. The administration is preparing a second round of tariff-aid payments to farmers, as well as looking into freeing up funds for growers claiming what’s known as prevented plant insurance and who sow an eligible cover crop.

Mark Wetzell, a farmer from Tampico, Illinois, warned that the impact on the Corn Belt will be long lasting. “It’s going to take people a couple of years to get right.” 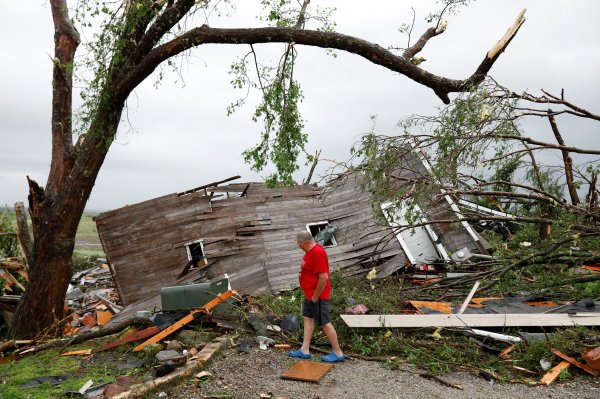 8 Tornadoes a Day for 12 Days Ravage Midwest
Next Up: Editor's Pick