Here's the Lineup for the Second 2020 Democratic Debate

The lineup for the second round of 2020 Democratic primary debates is now officially set.

After an elaborate random drawing aired live on CNN Thursday night, Sen. Elizabeth Warren and Sen. Bernie Sanders emerged as the biggest names to appear on stage on Tuesday, July 30, while former Vice President Joe Biden and Sen. Kamala Harris will be the biggest names on Wednesday, July 31 — setting up a rematch following their dramatic showdown in the first debate last month.

The cable news channel will host the two-night debate, which will take place in Detroit. Dana Bash, Don Lemon and Jake Tapper will moderate.

The drawing was spread across three groupings, which CNN and the Democratic National Committee said they established “to ensure support for the candidates is evenly spread across both nights.” CNN and the DNC further stated that public polling was used to determine each grouping.

The final drawing group of four consisted of the top-polling candidates: Biden, Warren, Sanders, and Harris.

In each grouping, the candidates were randomly chosen to appear in either the first or second night of debates. For each draw, a CNN anchor pulled a candidate’s name from one box, and then picked a date card from a second box.

The candidates who qualified for the second run of debates are essentially the same ones who faced off in the first round of debates held in June. The only change is the addition of Bullock, the governor of Montana, who will replace former candidate Eric Swalwell, a representative from California. Rep. Swalwell dropped out of the race earlier this month. Bullock, who was bumped from the first debates after the DNC disqualified one of the surveys that would have enabled him to be on the stage, has advocated for campaign finance reform and is known for signing an executive order to reinstate net neutrality in Montana after the FCC repealed it on a national level.

Candidates could qualify to make the debate if they either polled at 1% in three polls or received 65,000 individual donations.

These candidates will appear on night one

These candidates will appear on night two

The second night of the debate takes place on Wednesday, July 31 at 8 p.m. ET.

Learn more about the candidates taking part in the debate

The consistent frontrunner in the Democratic primary race, Biden has spent the weeks since the first debates on the defense after Kamala Harris criticized his past work with segregationist senators and his comments regarding federal busing to desegregate schools. As a candidate, Biden has positioned himself away from his more progressive opponents—his recent moves include aggressively defending the Affordable Care Act as some of his rivals call for government-run universal healthcare.

Harris, the former San Francisco district attorney and California attorney general, led the latest poll in her home state this week, with 23% of California Democratic and Democratic-leaning voters backing her in the latest Quinnipiac California poll. The California Senator made waves following the first Democratic debates for her confrontation of Biden over busing and school desegregation in the 1970s, becoming a standout of the night. As a candidate, Harris has proposed raises for teachers, supports Medicare for All and the Green New Deal and broadening the Earned Income Tax Credit. While she has highlighted her experience as a prosecutor as a strength, Harris has also evolved on some criminal justice positions, such as supporting marijuana legalization and calling for a moratorium on the death penalty.

Known as the candidate who has “a plan for that,” Warren has focused her campaign on outlining specific policy proposals, including for canceling student debt, universal childcare, free public college, tackling the opioid epidemic and implementing a wealth tax.

The 37-year-old South Bend mayor has gained attention for outlining his military experience, foreign policy vision and religion, though he has also received criticism for not being specific enough on policy.

After vying unsuccessfully for the Democratic presidential nomination in 2016, Sanders has continued to advocate for many of the same progressive platforms in joining the 2020 race. His calls for Medicare for All have found support among other Democratic candidates. Sanders also supports tuition-free college and has outlined how he would remove the United States from its wars in the Middle East.

A standout in the first Democratic debates, Castro shined onstage when he talked about the austere conditions in which migrant children are held at the border and detailed his immigration reform plan as he challenged his rivals. The former Housing and Urban Development secretary under President Obama and the former mayor of San Antonio, Texas, Castro was the first 2020 Democratic candidate to issue a plan to get rid of lead poisoning.

The New York senator and former House member has proposed a policy to offer paid family leave and led campaigns against sexual harassment. Gillibrand has come out in support of Medicare for All.

Gabbard, who served in Iraq and was a former member of the Hawaii Army National Guard, was elected to the House in 2012. Her policy platforms lean progressive, as she has called for breaking up big banks and healthcare for all, according to her campaign website. Her foreign policy views have created controversy, and she has faced criticism for meeting with Syrian president Bashar al-Assad and for declining to say if he is a war criminal.

Arguably one of the breakout stars of the first round of Democratic debates, the writer and spiritual advisor (who has guided Oprah) has called for a “moral and spiritual awakening” for the U.S. throughout her campaign. Williamson brought a different, more zen-like vibe to the debates, where she insisted “love” will win over President Donald Trump. As for her actual policy platforms, Williamson wants to pay reparations for slavery, legalize marijuana, provide free college and backs universal health care and the Green New Deal. She has also been criticized for her skepticism of mandatory vaccines.

Booker, who has ranked in the middle of the crowded Democratic field in polls and fundraising, supports gun legislation, an expansion of criminal justice reform legislation and giving newborn babies “baby bonds” savings accounts.

The New York City mayor is trying to take his political experience all the way to the Oval Office. During his time onstage at the first Democratic debates, de Blasio was one of two candidates to raise his hand in favor of canceling private insurance to bring in a government-run program (the other candidate was Warren).

Bennet joined the presidential race in May following a clean bill of health after a prostate cancer diagnosis. Among the more moderate candidates in the group of Democrats running for office, Bennet has advocated for proposals that will hold appeal across the aisle. He opposes Medicare for All, in favor of his own proposal called Medicare X, and supports the American Family Act.

The former Texas representative made national headlines when he launched an unsuccessful bid to unseat Ted Cruz from his Texas Senate seat. As a presidential candidate though, O’Rourke has stumbled a bit, and has recently slid in polls. His policy proposals include a plan to reduce greenhouse gas emissions.

The Ohio Congressman, who represents a largely white, working-class part of the state wants to appeal to those voters as he makes his bid for the presidency. His politics can be unclear—he has unsuccessfully tried to take on House Speaker Nancy Pelosi for her role and has previously backed corporate-tax cuts.

Another of the more moderate candidates in the race, Hickenlooper is known as someone who wants to work across party lines and for his pro-business policy proposals.

Democratic presidential candidate and Washington Gov. Jay Inslee does a television interview with MSNBC in the spin room ahead of the first Democratic presidential primary debate for the 2020 election at the Adrienne Arsht Center for the Performing Arts, June 26, 2019 in Miami, Florida.
Drew Angerer—Getty Images

Inslee, a former House member, has centered his campaign on climate change, calling for a debate that focuses just on that issue. Inslee has previously tried to pass a carbon tax and has signed bills that aim to eliminate fossil-fuel generated power by 2045.

Yang, a former Silicon Valley entrepreneur, has gained steam in the Democratic primary for talking about subjects that other candidates aren’t really touching, including universal basic income as a response to automation.

MIAMI, FLORIDA - JUNE 26: Sen. Amy Klobuchar (D-MN) speaks during the first night of the Democratic presidential debate on June 26, 2019 in Miami, Florida. A field of 20 Democratic presidential candidates was split into two groups of 10 for the first debate of the 2020 election, taking place over two nights at Knight Concert Hall of the Adrienne Arsht Center for the Performing Arts of Miami-Dade County, hosted by NBC News, MSNBC, and Telemundo. (Photo by Joe Raedle/Getty Images)
Joe Raedle—Getty Images

A former prosecutor, Klobuchar is focused on a pragmatic campaign and finding policies that appeal to the middle, such as a $650 billion plan to tackle infrastructure.

Another moderate in a field of candidates where many have positioned themselves on progressive platforms, Delaney has previously received criticism for not supporting Medicare for All.

The sole newcomer to the second round of debates, Bullock has ranked fairly low in the polls since launching his campaign. He has argued that Democrats need to win back voters who supported Obama and then Trump. Bullock’s campaign focus has centered on fighting corruption.

These candidates didn’t make the cut 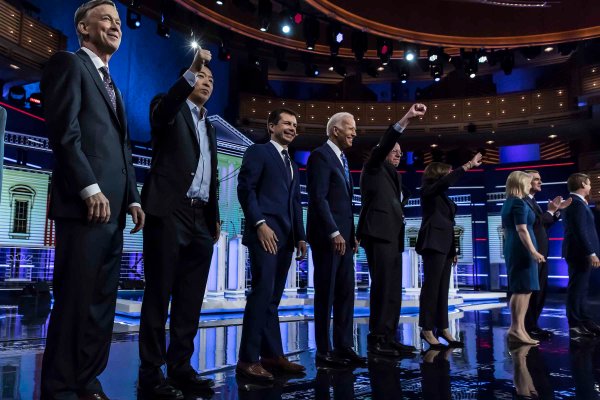 Here Are the Issues the 2020 Democratic Candidates Are Tweeting About Most
Next Up: Editor's Pick