Eric Swalwell Drops Out of the 2020 Presidential Race

By Alana Abramson and Lissandra Villa

“Today ends our presidential campaign,” he said at a press conference Monday afternoon.

The 37-year-old Congressman launched his campaign this past April. He has been anointed a rising star in the House of Representatives, where he has been mentored by House Speaker Nancy Pelosi. But his presidential campaign had been floundering; although he qualified for the first Democratic debate last month, his polling placed him in the bottom tier of candidates.

During his tenure in Congress, Swalwell became best-known for his omnipresent cable news appearances. In addition to serving on the House judiciary and intelligence committees, he took gun violence as his signature issue during his presidential run.

At the press conference, Swalwell said he wanted to be honest about his odds of winning. “If there was a viable chance, I would not be standing here today,” he said.

Most recently, he took up the “pass the torch” mantle at the first Democratic primary debate, calling for the presidential nominee to reflect generational change within the party. “We can’t be a forward looking party if we look to the past for our leadership,” Swalwell said at the debates, aiming his comments largely at former Vice President Joe Biden.

He said that he does not yet know who he will endorse in the primary, making a joke about one of the star players on the U.S. women’s soccer team.

“If Megan Rapinoe gets in the race, I’m probably going to endorse her,” he said.

Former West Virginia state Sen. Richard Ojeda dropped out of the 2020 primary in January, just weeks after he launched his campaign.

Write to Alana Abramson at Alana.Abramson@time.com and Lissandra Villa at lissandra.villa@time.com. 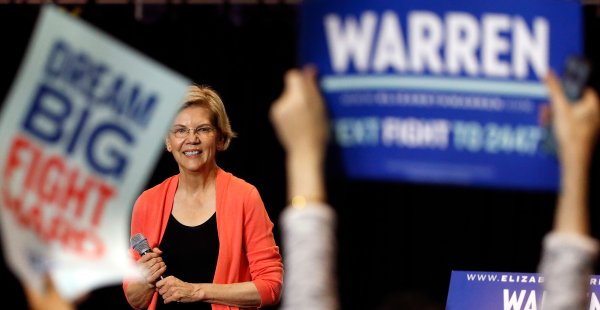