Marianne Williamson's Vibe at Thursday's Debate Was All Love. People Couldn't Get Enough

It’s 2021. President Marianne Williamson sits down to make her first call to a foreign leader. Her pick? New Zealand Prime Minister Jacinda Ardern, who has said that her goal is to make her country the best place for children to grow up.

That was the picture Williamson painted at Thursday’s Democratic debate, when asked to describe the first thing she would do in the Oval Office if elected president. It was not the kind of answer that her rivals would have given, nor really the kind of answer that any presidential candidate who ever made it onto a debate stage has given, but Williamson is not that kind of candidate.

A self-help author who does not like to be described as a guru or Oprah Winfrey’s “BFF,” as her campaign told reporters in a press release this week, Williamson has called for a “moral and spiritual awakening” for the country to recover from Donald Trump’s presidency. And that was the exact vibe that she brought with her to the debate stage in Miami.

Ahead of Wednesday’s broadcast, her team sent around a press release encouraging folks to replace any debate-themed drinking games with something more zen. Instead of taking a shot or sip of alcohol throughout the night, viewers could give yoga moves a try. When a candidate said “infrastructure,” Williamson recommended “dropping into a low plank.” For the Green New Deal, strike an “eagle pose.”

A video of Williamson dancing also circulated on social media on Wednesday. “Marianne Williamson has shared some of her prep for tomorrow’s debate,” one user wrote.

Many viewers of Thursday’s broadcast found Williamson’s energy an “interesting” departure from the rest of the crowd. Her performance inspired a strong reaction online, though it wasn’t necessarily newfound support for her to become president.

But while her personal style borrowed from the vaguely New Age spirituality often found on the shelves of the self-help section at a suburban Barnes and Noble, she also used her time to make some more serious points on the issues.

As far as concrete proposals go, Williamson is running on a platform of paying reparations for slavery, creating a governmental body that addresses children’s “chronic trauma” and legalizing marijuana. During the debate, Williamson also highlighted her opinions on health care, family separations and Trump.

“If you forcibly take a child from their parents arms you are kidnapping them. And if you take a lot of children and you put them in a detainment center thus inflicting chronic trauma upon them that’s called child abuse. This is collective child abuse.”

On generational change in politics:

“That somebody has a younger body doesn’t mean you don’t have old ideas.”

Her closing thought at the debate summarized her campaign’s main idea: that love will defeat President Donald Trump.

“So Mr. President, if you’re listening, I want you to hear me please: You have harnessed fear for political purposes, and only love can cast that out,” she said. “So I, sir, I have a feeling you know what you’re doing. I’m going to harness love for political purposes. I will meet you on that field, and sir, love will win.” 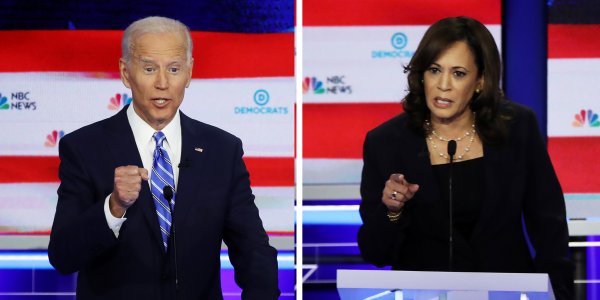 Behind Kamala Harris' Attack on Biden's Civil Rights Record
Next Up: Editor's Pick