What's a Jellicle, Anyway? Everything You Need to Know About Cats Before You See the Movie

The Cats are coming. The film adaptation of the beloved 1981 musical, with a star-studded cast — Idris Elba! Taylor Swift! Jennifer Hudson! Judi Dench! Jason Derulo! (Did we mention Taylor Swift?) — finally hits theaters on Dec. 20. Back in July, we got a taste of what’s to come, with a featurette and a trailer dropped a day before the release of this year’s other cats movie, The Lion King. Since then, fans of the musical have been, depending on the case, both excited for and ready to pounce on director Tom Hooper’s decisions around their favorite feline characters. (Particularly when it comes to the movie’s use of “digital fur technology.”) But newbies to the Cats universe may find themselves with a lot of questions about these anthropomorphic kitties.

Here’s a primer on the Cats musical to prepare the uninitiated for the upcoming feline invasion.

What’s the plot of Cats the musical?

The Cats musical, which is a fully sung-through show, revolves around a tribe of cats called Jellicles who are preparing for a ball and an ensuing ritual in which one Jellicle is chosen to become reborn. (Cats have nine lives, remember?) Each of the main cats — the curiously named Munkustrap, Jennyanydots, Rum Tum Tugger, Grizabella, Bustopher Jones, Mungojerrie, Rumpleteazer, Jellylorum, Skimbleshanks, Magical Mr. Mistoffelees and more — get moments to shine and show off their distinctive personalities in choreographed dance numbers. In the second act, there’s a fight between the mischievous Macavity and the patriarch Old Deuteronomy, who gets kidnapped. With the help of the good cats, Old Deuteronomy is rescued. Finally, the old and oft-shunned Grizabella is chosen to ascend to a new life.

Who created Cats the musical?

Cats the musical was written by Andrew Lloyd Webber and first performed on London’s West End in 1981. Lloyd Webber based the wide cast of characters on one of his childhood favorites, poet T.S. Eliot’s 1939 book Old Possum’s Book of Practical Cats. The book is a whimsical collection of poems that details the antics and histories of all the kitties that would later appear onstage in the musical. Lloyd Webber set Eliot’s original verse to his own music, turning the poems into lyrics. The originating team included producer Cameron Mackintosh, director Trevor Nunn, choreographer Gillian Lynne and set and costume designer John Napier.

What is a Jellicle?

The cats in the show refer to themselves as “Jellicles.” The term has a long history: it’s a contraction of the phrase “dear little cats,” turned into a nonsense term in poetic style for Eliot’s 1936 poem “Pollicle Dogs and Jellicle Cats.” In Eliot’s imagination, Jellicles were black-and-white cats with nocturnal tendencies. But in the Lloyd Webber musical, they embody a broader array of colors and looks. One of their most important traditions is gathering for the annual Jellicle Ball. At the Ball, one is chosen to ascend to the Heaviside Layer — a kind of cat heaven — to be reborn.

Is Cats still on Broadway?

Bad news for the fans of live theater Cats: the musical is not currently on Broadway. But it has been performed on the Great White Way an impressive 8,107 times since it first debuted there in 1982. Its blockbuster first run, from 1982 to 2000, broke records as the longest-running show of all time. (It’s since been surpassed by The Phantom of the Opera, Chicago and The Lion King.) A 2015 revival of Cats closed in 2017. It’s also one of the highest-grossing Broadway shows of all time and is thought to have attracted over $3 billion in revenue to New York City.

Hitting theaters on Dec. 20, 2019, the movie is directed by Oscar winner Tom Hooper (of The Danish Girl, Les Misérables and The King’s Speech), who has convened a seriously A-list cast. Idris Elba is taking on the role of Macavity. Taylor Swift will play Bombalurina. Jennifer Hudson is Grizabella, Judi Dench is Old Deuteronomy, Ian McKellen is Gus, Rebel Wilson is Jennyanydots, Jason Derulo is Rum Tum Tugger and James Corden is Bustopher Jones. The Cats movie also features some of the world’s top dancers in genres ranging from hip-hop to ballet (including Royal Ballet principal dancer Francesca Hayward as star Victoria) and moves from Hamilton choreographer Andy Blankenbuehler. The set was made extra-large, so that the human actors are scaled down to cat size. The movie is filled with magical neon cityscapes and features Hudson’s booming pipes, a ton of dancing and some expensive-looking production design.

And yes, the cats are furry in the movie. Much has been made of the all-important “digital fur technology.” The actors have mentioned that they filmed in lycra, with the fur added later.

What was the advance response to this Cats movie?

People are excited, confused and fascinated by the movie adaptation; after all, “digital fur technology” can go in a lot of directions, not all of them good. While he has quite a collection of awards, Hooper is also a divisive director: not everyone was on board with his starry, big-screen adaptation of Les Misérables. Actor Ian McKellen summed it up in his response on Twitter: “Most of you are looking forward to it, many are curious, and others have their doubts,” he shared on July 17.

What was the critical response to the Cats premiere?

Cats had its world premiere in New York City on Dec. 16, with Hooper telling the assembled audience — including nearly all of the movie’s stars, from Elba to Swift to Derulo — that he had only finished editing the movie the morning prior. The movie left many attendees baffled and amused. The question remains: what exactly is the plot of Cats? Reactions have been mixed.

What is new in the Cats movie?

The movie turns Hayward’s character Victoria into a kind of audience surrogate, introducing her to the Jellicle world and including a new solo song for her penned by Swift and Lloyd Webber, “Beautiful Ghosts,” as a response to Hudson’s emotional rendition of “Memory.” Also, the evil Macavity appears throughout. (He usually is seen just toward the end, when he steals away Old Deuteronomy.) There are also now a few lines of dialogue, including some jokes for Corden and Wilson to share. And we see what happens following the musical numbers of Jennyanydots, Bustopher Jones and Gus, closing the loop on their story arcs. Meanwhile, Swift’s Bombalurina is now a henchwoman of Macavity. And the reason Grizabella is so hated by the other Jellicle cats — she turned to Macavity — is more clearly articulated, although it remains fuzzy.

But mostly, the new Cats is a faithful adaptation of the stage play.

Why is Cats so popular?

Cats has a long list of celebrity fans and stars who have appeared in its production, including Nicole Scherzinger in the West End revival and Leona Lewis in the Broadway revival. (Judi Dench also said she was meant to be in the West End original before an injury waylaid her appearance then.) It’s also a Tony Award-winning show, winning the prize for Best Musical, among others. The production quality is high, the songs are catchy and viewers don’t necessarily need to speak English or bother following along with the plot, giving it an international reach. It’s all about the visual spectacle, which is appropriate for all ages, and it gets a veneer of intellectual credibility thanks to the poetic verse on which it’s based. Lloyd Webber himself explained it this way to the New York Times in 2016: It’s “the perfect outline for an entertainment. When it works really well, it’s the T.S. Eliot that underpins us.”

Why does Taylor Swift love Cats?

Asked about getting cast in the movie, known cat-lover Taylor Swift responded: “This is my calling in life.” Swift has three cats herself, all named for TV and movie characters: Olivia Benson, Meredith Grey and her newest kitten, Benjamin Button. “I have cats. I’m obsessed with them. I love my cats so much that when a role came up in a movie called Cats, I just thought, like, I gotta do this,” she said earlier this year of her decision to join the cast. She even spoke about at on-set “cat school” to teach the actors how to tap into their feline instincts. Swift’s passion for cats is in part due to their personalities. “They’re very dignified. They’re independent. They’re very capable of dealing with their own life,” she’s said.

While Swift has had on-screen cameos before, this is her highest-profile film appearance to date. But followers will know that Swift is no stranger to getting into character; each of her albums and tours have been lauded for their elaborate storytelling aspects. There’s no doubt her enthusiastic fans will be clamoring for awards attention for Swift when the time comes.

Have there been other Cats adaptations?

Besides the stage production, Lloyd Webber helped coordinate a 1998 direct-to-video Cats movie that re-created the theater musical on film. It was staged at London’s Adelphi Theatre and featured a cast of actors who had mostly participated in the musical across different productions before, with the runtime condensed to make it more digestible as a movie. (The stage show runs 2 hours and 40 minutes; this movie came in at two hours.) There have been plenty of riffs on the theme over the years, like “RepubliCATS” and the “Katdashians!” too, but the new movie will be only the second officially sanctioned film project for the show. 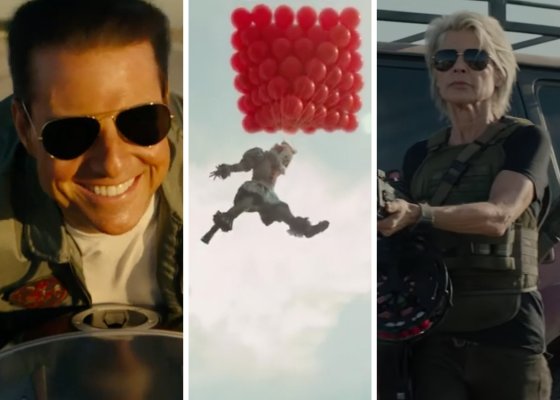 Here Are All the Best Trailers From San Diego Comic-Con
Next Up: Editor's Pick