Disney Keeps Remaking Movies Like The Lion King. Is That So Bad?

Unless you’re 99, and maybe even then, your first big-screen experience is likely to have been a Disney movie. Disney -productions—whether we’re talking about Snow White and the Seven Dwarfs (1937), The Computer Wore Tennis Shoes (1969) or the empowerment juggernaut Frozen (2013)—have long been considered safe, wholesome choices for kids, pictures that parents can feel they don’t need to vet in advance. Even I can attest to the potency of the Disney product. The first movie I saw in a theater, at roughly age 3, was The Three Lives of Thomasina (1964), about the adventures of an orange feline. I can say that with just one film, the Disney organization created a monster: I demanded more movies, and a cat.

When you’re a big person, a movie seen in a theater is literally larger than life; when you’re a little person, it can be like a new portal opening in the universe, overwhelming in the best way—or possibly the worst. Those experiences matter, and Disney knows the -power—and the profit -potential—of what’s in its vaults, which helps explain the studio’s ongoing strategy of remaking its most popular animated films, often in straight-out live-action versions. These revamps are appearing so rapidly, it’s hard to keep up: two of them, Tim Burton’s Dumbo and Guy Ritchie’s Aladdin, have already appeared this year, with release dates barely two months apart. And now, with the smoke from Aladdin’s lamp still lingering in the air, comes The Lion King, Jon Favreau’s photorealistic adaptation of the 1994 animated megahit, a film beloved by many, if not by me. In fact, I can think of few movies that are as emotionally punishing in the guise of being charming or life–affirming. Its moments of terror are protracted and bleak, and play freely on a child’s worst fear: that of losing a parent. The movie’s most horrific sequences are followed, often too abruptly, by attempts at jaunty good humor; the movie’s tonal shifts are jagged as shards of glass.

How you feel about Favreau’s interpretation of The Lion King, a blend of live-action filmmaking techniques, virtual-reality methods and computer–generated imagery, will depend largely on how you feel about the original. The story, even with a gently updated script by Jeff Nathanson, is roughly the same: a lion cub named Simba idolizes his father Mufasa (voiced, as in the original, by James Earl Jones), knowing that one day he’ll follow in those paternal pawprints to become king of Pride Rock. But Mufasa’s jealous and vengeful brother, Scar (Chiwetel Ejiofor), hopes to wipe out both generations of lion royalty at once so he can become king. He succeeds in killing Mufasa, and this new Lion King re-creates with hyper-realistic clarity the most enduring—and also the most egregiously-manipulative—image from the first movie: that of young Simba nudging his father’s corpse, desperate to awaken him.

Featuring the voices of Florence Kasumba, Eric André and Keegan-Michael Key as the hyenas, and Chiwetel Ejiofor as Scar, Disney’s “The Lion King” is directed by Jon Favreau.
Disney—©2019 Disney Enterprises, Inc. All Rights Reserved.

If you’ve seen the original, you know how the rest of it goes. The chief difference here is the look of this new Lion King, polished and handsome but also curiously sterile. Giraffes run hither and thither on spotty, spindly legs; zebra herds dash by, a stripy blur. This Lion King took a lot of effort to make, and every bead of sweat shows. The lions and other animals sport highly realistic fur and feathers; their mouths move and words spill out, in a manner that’s either wonderful or dumb depending on your tolerance for animals’ spouting lessons about the circle of life and other oversimplified nuggets of food-chain wisdom. The film certainly boasts some star power: as an adult, Simba is voiced by Donald Glover, and Nala, the lioness friend who draws him from his exile and persuades him to return to Pride Rock, is voiced by a characteristically assertive-Beyoncé—and she sounds like she means business.

All of these Disney remakes are designed to stoke the nostalgia of boomers, Gen X-ers and millennials, if not 99-year-olds, and many of the moviegoers who grew up with The Lion King, in particular, now have young kids of their own. Little wonder the studio is seeing big dollar signs in these lion eyes. But it’s dangerous to think of any major entertainment -conglomerate—even, or maybe particularly, the aggressively family–oriented Disney—as our friend. The first thing Disney wants from movie-goers is our money, and between its phalanx of Marvel Studios blockbusters, its lucrative Pixar and Star Wars releases, and its recent purchase of 20th Century Fox, it’s poised to grab more and more of it.

Yet to dismiss the Disney remakes, specifically, as retreads driven by greed and hubris is to overlook a significant truth: the studio has shown some imaginativeness in matching directors with material, and in some cases, the results have been wonderful. Disney has perhaps trusted Tim Burton—once a genius, now a purveyor of brassy-vulgarity—with too many of these projects, like the showy, headache-inducing Alice in Wonderland (2010), and Dumbo was just more of the same. But Bill Condon’s 2017 Beauty and the Beast, starring Emma Watson as the bookish Belle, is an exuberant delight, a love song to the go-for-broke musicals of the 1960s, like Carol Reed’s Oliver! and the Rodgers and Hammerstein made-for-TV Cinderella. Wild and vivid and gorgeous to look at, Beauty and the Beast was and is like nothing else being made today—and yet it emerged from a studio we generally consider deeply conventional.

Dan Stevens as The Beast, left, and Emma Watson as Belle in the live-action adaptation of Beauty and the Beast.
Disney/AP

There are other examples, like Kenneth Branagh’s bold, rococo 2015 Cinderella, starring a winsome Lily James as the future princess-in-blue. (John Waters, the king of so-bad-it’s-good filmmaking, put it on his 10 Best Movies list that year, and he’s a tough crowd.) Who knows what some of the future Disney remake projects might look like? Next up is Charlie Bean’s Lady and the Tramp, slated for November, and in 2020, Niki Caro’s warrior-woman adventure Mulan will bring a cast of Chinese actors, including Liu Yifei, Donnie Yen and the great Jet Li, to a worldwide audience, including many Americans who may be seeing them for the first time.

Let’s not forget, either, that before The Lion King, Favreau worked some clever magic with another remake: his 2016 Jungle Book, in which computer–generated animals talk, sing, saunter, slink and slither around a live-action boy, Neel Sethi’s Mowgli, has spirit and verve to spare. In fact, the loose-limbed joyousness of The Jungle Book may help put the flaws of The Lion King in perspective-: the latter movie, so steeped in faux–serious themes like the importance of duty, is the kind of material that has to be approached with reverence. Maybe Favreau just couldn’t have any fun with it.

And that’s the danger of trying to do inventive work for a very serious studio with big money riding on each and every project. Photo-realistic lion hairs, no matter how many millions of them you’ve generated, aren’t by themselves going to get the job done. A filmmaker has to find ways to dance in the margins and get away with it. You can genuflect a little—as long as you keep some space clear for your own personal roar. 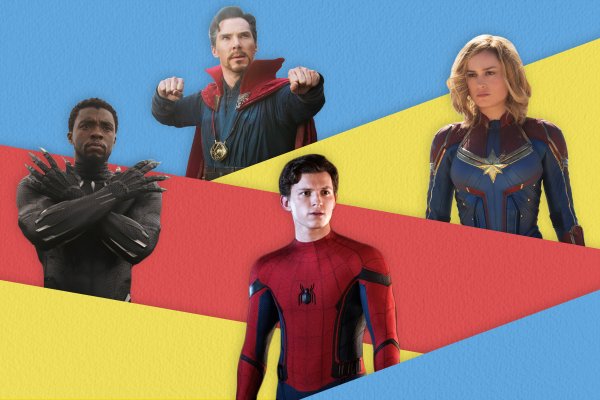 What Spider-Man Far From Home Means for the Future of Marvel
Next Up: Editor's Pick